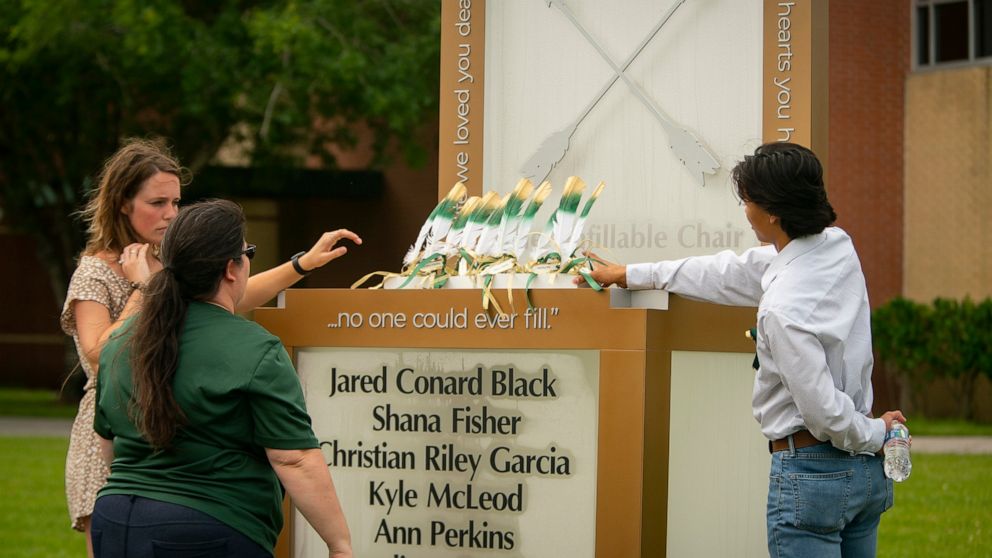 SANTA FE, Texas — A memorial honoring the 10 people who were killed during a shooting at a Texas high school in 2018 was unveiled on Tuesday, the third anniversary of the deadly incident.

On May 18, 2018, eight students and two teachers were killed at Santa Fe High School, when another student opened fire inside the campus about 55 miles (88 kilometers) southeast of Houston. Thirteen other people were wounded in the shooting.

The memorial, called “the Unfillable Chair,” is comprised of an aluminum chair that stands 8 feet (2.44 meters) tall, with the empty seat being 4 feet (1.22 meters) wide by 3 feet (0.91 meters) deep. The names of the victims are displayed on the front of the chair.

The empty chair’s exaggerated height “re-enforces the concept that the chair will never be filled and will sit in commemoration of those lost too soon,” according to a foundation of current and former students as well as parents and community members behind the memorial.

The chair was designed by a group of five current and former students.

During a ceremony at the high school on Tuesday, Reagan Gaona, one of the chair’s student designers who graduated last year, said while the 10 victims are “no longer… with us, we’ll always have a place for them in our hearts.”

The chair, which will sit outside on the campus, was set to be part of larger memorial comprised of a meditative grove and 10 concrete, feather-shaped monoliths for each victim. The foundation is still raising funds for the larger memorial.