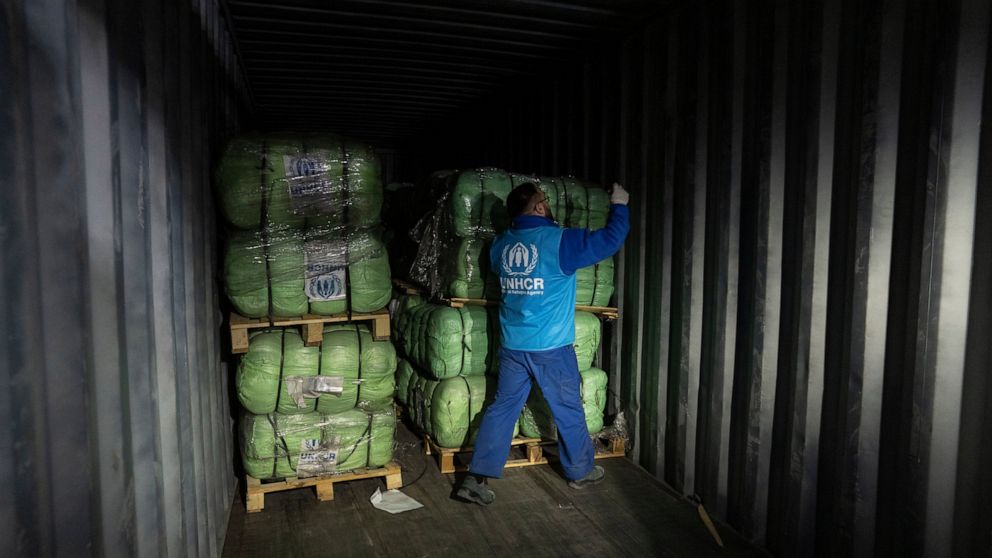 The U.N. Security Council has scheduled a meeting on Ukraine for Thursday

UNITED NATIONS — The U.N. Security Council will meet Thursday at the request of six Western nations that sought an open session on Ukraine ahead of an expected vote on a Russian humanitarian resolution that they have sharply criticized for making no mention of Moscow’s war against its smaller neighbor.

“Russia is committing war crimes and targeting civilians. Russia’s illegal war on Ukraine is a threat to us all,” tweeted the U.N. mission of the United Kingdom, one of the six countries that requested the meeting.

The mission posted the flags of the six council nations requesting the meeting — the UK, U.S., France, Ireland, Norway and Albania.

Russia circulated a proposed Security Council resolution Tuesday that would demand protection for civilians “in vulnerable situations” in Ukraine and safe passage for humanitarian aid and people seeking to leave the country but without mentioning the war.

The draft resolution would also underscore the need for “the parties concerned” to agree on humanitarian pauses to rapidly evacuate “all civilians,” but it never identifies the parties.

The resolution is expected to be voted on by the council Friday.

Russia presented its draft a day after France and Mexico announced that a humanitarian resolution on Ukraine that they co-sponsored was being moved to the 193-member General Assembly, after two weeks of discussions on the draft in the 15-member Security Council,.

Britain’s U.N. ambassador, Barbara Woodward, tweeted Tuesday that the Russian draft “has a few glaring omissions. For example, the fact that Russia is the aggressor here, and it is Russia’s invasion driving this humanitarian crisis.”

Russian authorities maintain they did not start the war and have repeatedly decried reports of Russian military setbacks or civilian deaths in Ukraine as fake news. They also denounce reports calling its military operations a war or an invasion. State media outlets and government officials insist Russian forces target only military facilities despite widespread video footage of civilians and civilian infrastructure, including residential buildings and hospitals, being hit by Russian missiles.

Polyansky tweeted that Russia “is fully on board with a humanitarian text” but said it was clear Western council members don’t need one.

Mexican Ambassador Juan Ramon De La Fuente, however, told reporters Wednesday that he and French Ambassador Nicolas De Riviere were working on taking their humanitarian resolution to the General Assembly “very soon — in the following days.” He expressed hope the assembly can vote on it this week or next week.

The Russian Mission had said a vote on their resolution could take place as early as Wednesday, but some council members wanted to discuss the text and there was a closed meeting of council experts Wednesday morning. Russia then asked to delay the vote, and the United Arab Emirates, which holds the council presidency this month, said it is now scheduled for Friday.

Olivia Dalton, spokesperson for the U.S. Mission to the United Nations, said Tuesday it was “unconscionable that Russia, the aggressor responsible for creating this crisis, would have the audacity to put forward this resolution.”

She said the United States will work with other countries for a General Assembly resolution “that will more accurately reflect the views of U.N. member states” about the impact of Russia’s “unprovoked aggression.”

After Russia vetoed a Western-backed Security Council resolution demanding that it stop the war and withdraw its forces from Ukraine, the sponsors introduced a similar resolution in the General Assembly. It was adopted March 2 by an overwhelming vote of 141-5, with 35 countries abstaining.

Unlike Security Council resolutions, General Assembly resolutions are not legally binding, but there are no vetoes and they do have clout in reflecting international opinion.

Norwegian Ambassador Mona Juul told reporters Wednesday that “if really Russia wanted to stop the suffering of the civilians in Ukraine, they should stop the war.”