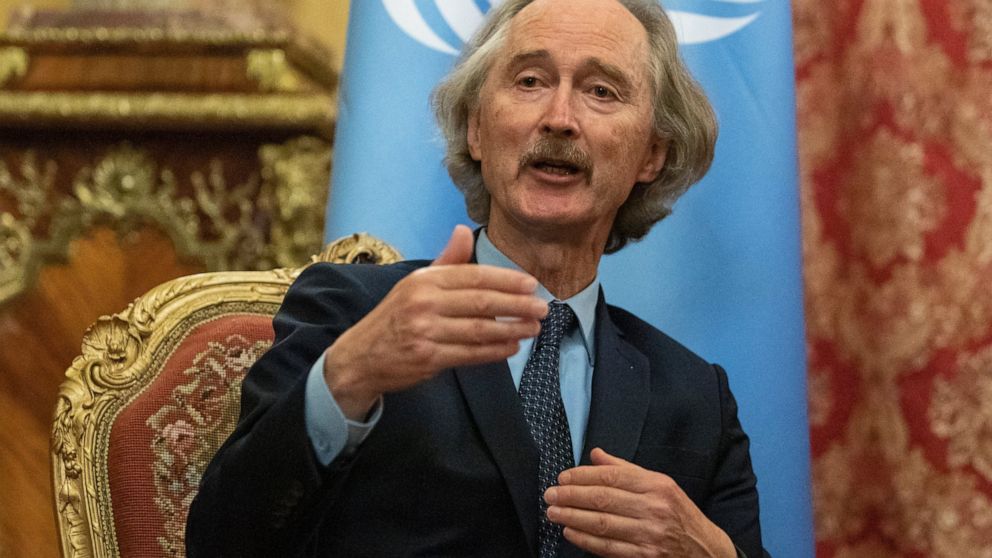 The U.N. special envoy for Syria says invitations have been issued for a sixth meeting of the committee charged with producing a new constitution for war-torn Syria in October

UNITED NATIONS — The U.N. special envoy for Syria announced Tuesday that invitations have been issued for a sixth meeting of the committee charged with producing a new constitution for war-torn Syria in October.

After the failure of the five previous meetings of Syrian government, opposition and civil society representatives, Geir Pedersen told the U.N. Security Council: “We should all now expect the constitutional committee to begin to work seriously on a process of drafting — not just preparing — a constitutional reform.”

“If it does that, then we will have a different and credible constitutional process,” he said.

Pedersen said the 45-member drafting committee will meet in Geneva starting Oct. 18, and the co-chairs from the government and opposition will for the first time meet with him the day before to prepare the session.

The last round of talks ended in January without progress. Pedersen said that after eight months of talks he was pleased to announce an agreement on “methodology” for a sixth round. It’s based on three pillars: respect for rules of procedure, the submission of texts of “basic constitutional principles” ahead of the meeting, and regular meetings of the co-chairs with him before and during the meeting.

“The co-chairs are also committed to setting provisional dates for future meetings and discussing a workplan,” he said.

Syria’s nearly 10-year conflict has killed more than half a million people and displaced half the country’s pre-war 23 million population, including more than 5 million refugees mostly in neighboring countries.

At a Russia-hosted Syrian peace conference in January 2018, an agreement was reached to form a 150-member committee to draft a new constitution. It took until September 2019 before a committee was formed.

The United Nations continues to emphasize the importance of a negotiated political solution to the Syria conflict as called for in a December 2015 Security Council resolution. It unanimously endorsed a road map to peace approved in Geneva on June 30, 2012 by representatives of the U.N., Arab League, European Union, Turkey and all five permanent Security Council members.

It calls for the drafting of a new constitution and ends with U.N.-supervised elections with all Syrians, including members of the diaspora, eligible to participate.

After the fifth round of negotiations failed in late January, Pedersen hinted the Syrian government delegation was to blame for the lack of progress.

The United States and several Western allies accused Syrian President Bashar Assad of deliberately stalling and delaying the drafting of a new constitution until after presidential elections to avoid a U.N.-supervised vote, as called for by the Security Council.

In late May, Assad was re-elected in what the government called a landslide for a fourth seven-year term, but the West and his opposition described the election as illegitimate and a sham.

Pedersen said the need for “a genuine intra-Syrian dialogue” was reportedly discussed by Assad and Russian President Vladimir Putin recently in Moscow, “and through this, a genuine process of Syrian political reform.”

“I am convinced that Geneva can be the place where Syrians committed to durable peace can begin to work with each other in a constructive manner,” he said.

Pedersen has said key global players are interested in stepped-up international diplomacy to “unlock progress” toward ending the country’s 10-year war. He told the Security Council on Tuesday that he is continuing to ask key countries to work with him “on concrete, mutual and reciprocal steps” to move the peace process forward.

In his briefing, the U.N. envoy painted a grim picture of Syria today saying poverty levels are approaching 90% and the country is facing mismanagement, corruption and the economic impact of neighboring Lebanon’s economic collapse. In addition, tens of thousands of Syrians remain detained, abducted or missing.

While military front lines have been largely frozen for 18 months, Pedersen said many Syrians who returned to their homes in the south of rebel-held northwest Idlib have been displaced again as a result of “sustained mutual shelling, rocket fire and increased airstrikes.”