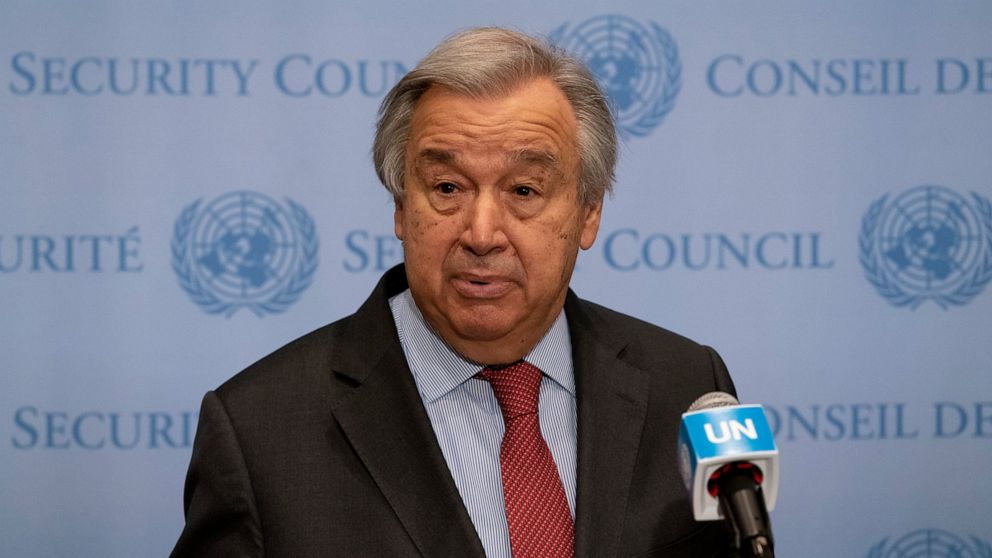 The United Nations says it is immediately allocating $20 million to scale up U.N. humanitarian operations in Ukraine following Russia’s invasion

Secretary-General Antonio Guterres made the announcement saying the U.N. and its humanitarian partners “are committed to staying and delivering, to support people in Ukraine in their time of need … regardless of who or where they are.”

“With deaths rising, we are seeing images of fear, anguish and terror in every corner of Ukraine,” the U.N. chief said. “People — everyday innocent people — always pay the highest price.”

U.N. humanitarian chief Martin Griffiths said the $20 million from the U.N.’s Central Emergency Response Fund will support emergency operations along the contact line in eastern Donetsk and Luhansk and in other areas of the country, and will “help with health care, shelter, food, and water and sanitation to the most vulnerable people affected by the conflict.”

David Beasley, executive director of the U.N. World Food Program, expressed deep concern at the potential impact of the conflict on access to food for civilians in conflict areas.

A WFP team is on the ground and ready to step in “provided that access is granted and resources are available,” he said. “We appeal to all parties to ensure that affected communities have continued access to any humanitarian support they may require and that the safety of humanitarian staff on the ground is guaranteed.”

Beasley said WFP operated in eastern Ukraine from 2014-2018, where Russian-backed separatist have been at war with the government, reaching more than one million people through cash, food vouchers or locally purchased food rations. The agency operated in both government- and non-government-controlled areas and remains committed to support all affected populations in Ukraine and neighboring countries as needed, he said.

“The Black Sea basin is one of the world’s most important areas for grain and agricultural production, and the food security impact of the conflict will likely be felt beyond Ukraine’s border, especially on the poorest of the poor,” Beasley warned in a statement.

He also warned that “Interruption to the flow of grain out of the Black Sea region will increase prices and add further fuel to food inflation at a time when its affordability is a concern across the globe following the economic damage caused by the Covid-19 pandemic.”

Peter Maurer, president of the International Committee of the Red Cross, said “the intensification and spread of the conflict risk a scale of death and destruction that are frightening to contemplate, given the immense military capacities involved.”

He said the ICRC’s priority is to assist those in need, and this week it delivered 3,000 liters of water to Dokuchaevsk Hospital in the rebel-held east and 7,000 liters to Donetsk municipality and visited detention facilities to help improve hygiene and nutrition.

“The security situation permitting, our teams now in Ukraine will continue their work to repair vital infrastructure, support health facilities with medicines and equipment, and support families with food and hygiene items,” Maurer said in a statement. “We will also continue our bilateral and confidential dialogue with the parties to the conflict to protect those affected by the fighting.”

The U.S. Agency for International Development said it has deployed a Disaster Assistance Response Team to respond to growing humanitarian needs stemming from Russia’s invasion of Ukraine.

Antonio Viitorino, director general of the U.N. International Office for Migration, said the eight-year conflict in Ukraine has displaced over 1.4 million people who now rely on assistance to meet their daily needs.

“This escalation will only deepen the humanitarian needs and compound the suffering of millions of families,” he said, stressing that IOM is committed to staying in Ukraine and will continue “to operate in a neutral and impartial manner.”

The International Rescue Committee, which has been responding to humanitarian crises in Europe since 2015, said the “humanitarian catastrophe from a full-scale war in Ukraine will lead to grave human suffering, … innocent deaths, destruction of civilian infrastructure and massive displacement inside the country and across Europe.”