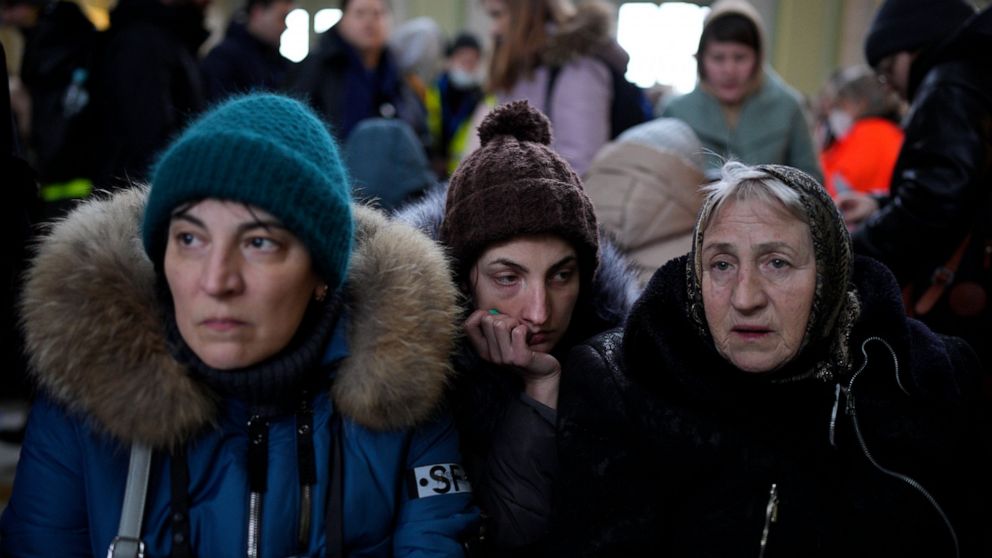 UNITED NATIONS — Ireland’s foreign minister saluted the resilience and courage of Ukraine’s women. The U.S. ambassador to the United Nations hailed their bravery in defending their homes and country. And the head of the International Monetary Fund told “sisters” in Ukraine: “We admire your courage, we share your pain, we stand with you.”

It was International Women’s Day on Wednesday and at a U.N. Security Council meeting focusing on empowering women economically in conflict areas speakers from a number of countries decried Russia’s war on neighboring Ukraine, and its impact on women.

Russian deputy ambassador Gennady Kuzmin responded, lashing out at sanctions on his country which hit “first and foremost at the interests of women in the social and economic areas.”

And he accused “a cold Western world” of looking on with indifference for eight years at what he called “the murders perpetrated by the Kyiv junta against women and children in Donetsk and Luhansk and their persecution by the Ukrainian radicals and neo-Nazis in the east and southeast of Ukraine.”

In addition, he said, towns and villages in those Russian-backed separatist areas were being bombed “and the Kyiv regime managed to get away with all of it.”

“But this was not something that could continue indefinitely,” Kuzmin said, alluding to a Russian justification for invading Ukraine.

Civilians, mostly women and children, “are not allowed to leave and the humanitarian aid is not let in,” she said, her voice shaking with emotion. “If they try to leave Russians open fire and kill them. They are running out of food and water, and they die.”

She said a 6-year-old girl died Monday in the besieged city of Mariupol on the Azov Sea, “alone in the last moments of her life as her mother was killed by Russian shelling.” And on Tuesday in the Mykolaiv region, she said “Russian occupiers fired at a van with a group of female teachers of the local orphanage (and) three of them were killed.” She also cited “cases of child sexual violence committed by occupiers.”

Mudrenko, who has the rank of counselor at the mission, also accused the Russians of undermining all arrangements on humanitarian corridors.

“For instance, in Mariupol the Ukrainian forces removed mines and roadblocks to ensure evacuation on previously agreed route,” she said. “The Russian forces immediately shelled and attempted to attack through this route.”

Mudrenko said the war has highlighted the role of Ukrainian women in defending their country. There were 57,000 women in the army at the start of 2021, comprising 22.8% of the force, she said, and according to the defense minister since Russia’s invasion that number “is significantly higher.”

Sima Bahous, the head of UN Women, told the council that in Ukraine “humanitarian needs are multiplying and spreading by the hour,” and the majority of those fleeing the country — now over 2 million — are women and children.

She warned that the war risked “a backsliding of women’s rights and women’s access to employment and livelihoods” in the war-torn country.

At a separate U.N. Women’s Day event, Bahous told participants that “the horrifying situation” in Ukraine and its impact on women “remind us that all conflicts, from Ukraine to Myanmar to Afghanistan, from the Sahel to Yemen, exact their highest price from women and girls.”

Ireland’s Foreign Minister Simon Coveney told the Security Council that “the eyes of the world are currently on Ukraine” where the war is having “a severe and disproportionate impact” on women and girls, and he strongly condemned Russia for violating the U.N. Charter and international law.

“Today on International Women’s Day, we want the women and the girls of Ukraine to know that we salute their resilience and their courage,” he said. “We stand with them now and into the future.”

Coveney stressed that the international community, and especially the Security Council, has a responsibility to ensure that the rights of all women at risk due to conflict are upheld, wherever that conflict takes place, “and we must never forget or downplay that duty.”

U.S. Ambassador Linda Thomas-Greenfield said “Russia’s unprovoked and unjustifiable war” has forced women “to make unimaginable choices — being forced to flee their homes due to threats of imminent violence while they continue to support their communities, families and loved ones.”

She singled out the pain of mothers forced to give birth in bomb shelters and forced to pass their children on to crowded trains alone — and women who have been critical “to building a burgeoning democratic society over the last eight years in Ukraine.”

IMF Managing Director Kristalina Georgieva told the council that women disproportionately bear the devastation of war in Ukraine and elsewhere, protecting their children, caring for the wounded, sacrificing for their countries, their communities and their families.