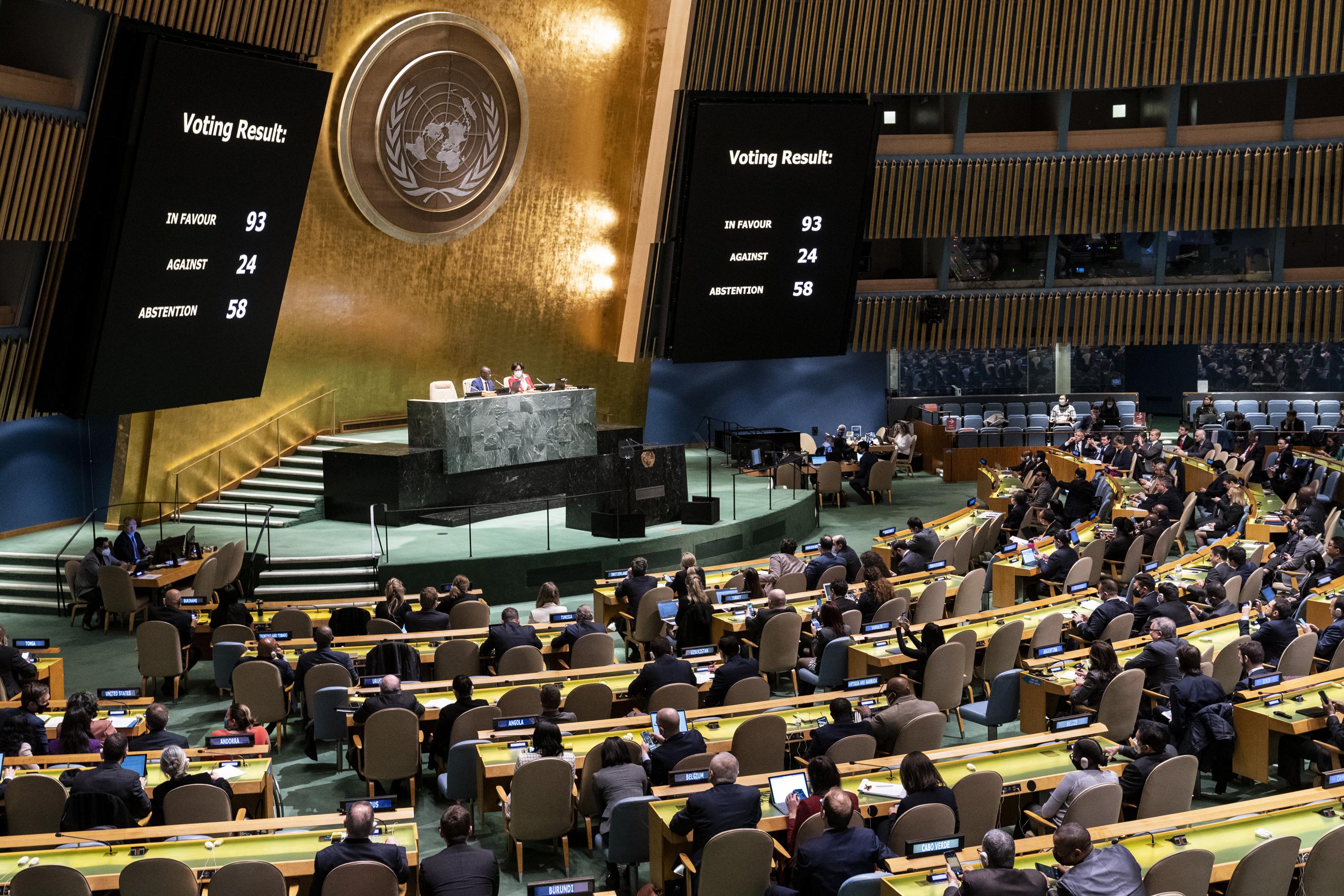 It was a rare, if not unprecedented rebuke against one of the five veto-wielding members of the U.N. Security Council.

U.S. Ambassador Linda Thomas-Greenfield called the vote “a historic moment,” telling the assembly: “We have collectively sent a strong message that the suffering of victims and survivors will not be ignored” and that Russia must be held accountable “for this unprovoked, unjust, unconscionable war.”

Thomas-Greenfield launched the campaign to suspend Russia from the U.N. Human Rights Council in the wake of videos and photos showing streets in the town of Bucha strewn with the bodies of civilians after Russian soldiers retreated. The deaths have sparked global revulsion and calls for tougher sanctions on Russia, which has vehemently denied its troops were responsible.

Russia is only the second country to have its membership rights stripped at the rights council. The other, Libya, was suspended in 2011 by the assembly when upheaval in the North African country brought down longtime leader Moammar Gadhafi.

The Geneva-based Human Rights Council is tasked with spotlighting and approving investigations of rights violations, and it does periodic reviews of the human rights situation in all 193 U.N. member nations.

It has created commissions of inquiry — which provide its highest level of scrutiny on rights violations and abuses — for conflicts in Ukraine, Syria, the Palestinian territories and elsewhere. It has also set up fact-finding missions in places like Libya, Myanmar and Venezuela.

The vote on the U.S. initiated resolution suspending Russia was 93-24 with 58 abstentions, significantly lower than on two resolutions the assembly adopted last month demanding an immediate cease-fire in Ukraine, withdrawal of all Russian troops and protection for civilians. Both of those resolutions were approved by at least 140 nations.

Russia’s deputy ambassador, Gennady Kuzmin, said after the vote that Russia had already withdrawn from the council before the assembly took action, apparently in expectation of the result. By withdrawing, council spokesman Rolando Gomez said Russia avoided being deprived of observer status at the rights body.

Kuzmin said Russia considers adoption of the resolution “an illegitimate and politically motivated step” by a group of countries with “short-term political and economic interests” that he accused of “blatant and massive violations of human rights.”

The 47-member Human Right Council was created in 2006 to replace a commission discredited because of some members’ poor rights records. The new council soon faced similar criticism, including that rights abusers sought seats to protect themselves and their allies, and for focusing on Israel.

Along with Russia, four other permanent members of the U.N. Security Council — Britain, China, France, and the United States, which rejoined this year — currently are serving three-year terms on the Human Rights Council. Other members with widely questioned rights records include, along with China, Eritrea, Venezuela, Sudan, Cuba and Libya.

While almost half the U.N.’s 193 member nations supported the resolution, more than half either voted against it, abstained or didn’t vote.

Explaining their decision not to support the resolution, some countries called it premature, noting there are ongoing investigations into whether war crimes have occurred, or said it would undermine the credibility of the Human Rights Council and the United Nations. Others said the resolution reflected American and European geopolitical agendas and what opponents called Western hypocrisy and selective outrage about human rights.

Before the vote, Ukraine’s U.N. Ambassador Sergiy Kyslytsya urged assembly members to keep the Human Rights Council from “sinking” and suspend Russia, saying it has committed “horrific human rights violations and abuses that would be equated to war crimes and crimes against humanity.”

“Russia’s actions are beyond the pale,” he said. “Russia is not only committing human rights violations, it is shaking the underpinnings of international peace and security.”

In a document circulated by Russia and obtained by The Associated Press, Russia said the U.S. and other opponents want to preserve their control over the world and continue “the politics of neo-colonialism of human rights” in international relations.

Kyslytsya responded to Russia’s complaints saying: “We have heard, many times, the same perverted logic of the aggressor trying to present itself as the victim.”

The General Assembly voted 140-5 with 38 abstentions on March 24 on a resolution blaming Russia for the humanitarian crisis in Ukraine and urging an immediate cease-fire and protection for millions of civilians and the homes, schools and hospitals critical to their survival.

The vote was almost exactly the same as for a March 2 resolution that the assembly adopted demanding an immediate Russian cease-fire, withdrawal of all its forces and protection for all civilians. That vote was 141-5 with 35 abstentions.

Both of those votes were not legally binding but did have clout as a reflection of global opinion.

Thursday’s vote and Russia’s withdrawal, however, have a direct impact on Moscow’s voice in a human rights body that has increasingly become a venue for a global stand-off between Western democracies and autocratic countries. China will lose a key ally there.

China abstained in both assembly votes last month but voted against suspending Russia from the Human Rights Council.