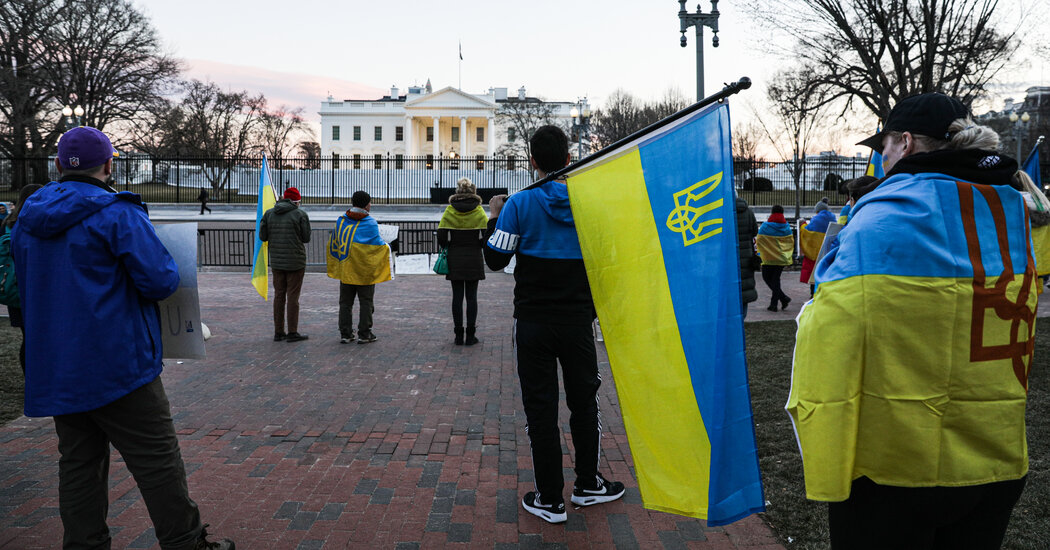 War and politics are complicating the efforts of the two biggest polluters in history — the United States and Europe — to slow down global warming, just as scientists warn of intensifying hazards.

On Tuesday evening, President Biden barely made a mention of his climate goals in the State of the Union speech despite promises to make climate an issue that drives his presidency. European politicians have their own problem: They are struggling to get out from under one of the Kremlin’s most powerful economic weapons — its fossil fuel exports, which Europe relies on for heat and electricity.

Oil and gas prices are soaring globally. That is a boon to those who extract and sell the very products that drive fatal heat waves, wildfires and sea level rise. And it is leading to new demands for increased drilling in the United States, already one of the world’s biggest producers of oil and gas.

The developments come just days after an exhaustive report from the United Nations that implored world leaders to sharply reduce emissions of carbon dioxide, methane and other greenhouse gases that are dangerously heating the planet. To fail, they said, is to face a harrowing future where the rate of global warming outpaces humanity’s ability to adapt.

In Washington, Mr. Biden’s ambitious climate legislation has been blocked by unanimous Republican opposition as well as a senator from his own party, Joe Manchin, who represents the coal-producing state of West Virginia and has strong backing from the fossil fuel industry. The Supreme Court could further limit Mr. Biden’s ambitions in a case that began this week that could restrict the federal government’s ability to regulate greenhouse gas emissions.

In his State of the Union address — traditionally considered a president’s best opportunity to rally the nation around an agenda — Mr. Biden cited climate in the context of his proposals to create jobs by repairing roads, airports and other crucial infrastructure. “We’ll do it all to withstand the devastating effects of the climate crisis,” he said.

But high gas prices pose a risk to Democrats ahead of midterm elections, and his remarks were intended to blunt that, too. He said he would release oil reserves — 30 million barrels worth — to keep prices down for Americans. “We are going to be OK,” he said.

Energy experts said that Mr. Biden missed an opportunity to connect the war in Ukraine to the need to more swiftly sever an economic reliance on fossil fuels. “The president did not articulate the long-term opportunity for the U.S. to lead the world in breaking free of the geopolitical nightmare that is oil dependency,” said Paul Bledsoe, a strategic adviser to the Progressive Policy Institute, a Washington-based think tank.

The Russian invasion in Ukraine has brought world leaders to a new, difficult crossroad. The European Union is feeling its effects most acutely.

Russia supplies nearly 40 percent of the gas that Europeans use for heat and electricity. In exposing the enormous leverage that Russia has enjoyed with its energy exports, the Ukraine conflict is forcing European leaders to make some urgent choices: Should it build new fossil fuel infrastructure so that it can replace Russian fuel with liquefied natural gas from elsewhere, chiefly the United States? Or should it shift away from fossil fuels faster?

Next week the world will get an early glimpse of Europe’s leanings, because officials in Brussels are due to announce a new energy strategy aimed at weaning the continent off Russian gas.

A draft of the report, reviewed by The New York Times, suggests that the new strategy will propose speeding up energy efficiency measures and renewable energy installations. It views imports of liquefied natural gas, or L.N.G., from the United States and elsewhere as a short term measure to offset Russian piped gas.

“This war will have deep repercussions one way or another on our own energy system,” Kadri Simson, the European Union energy commissioner, told reporters this week after an emergency meeting with energy ministers from the 27-member bloc.

Analysts have said European countries can quickly reduce gas dependence with energy efficiency measures and ramping up renewable energy investments, which are already in line with Europe’s ambition to stop pumping additional greenhouse gases into the atmosphere by midcentury. The conflict in Ukraine could fast-track some of that. It could also lead to what Lisa Fischer, who follows energy policy at E3G, a research group, called “a tectonic shift” — using renewables, rather than ample gas storage, to achieve energy security.

“It’s related, and people need to see it that way. Energy is a huge part of the geopolitics of what the options are,” Mr. Kerry said. “Energy is a key weapon within this fight, and if there were far less dependency on gas there would be a different set of plays.”

The United States, for its part, has ramped up exports of L.N.G. to Europe to counter the decline in Russian piped gas. By the end of this year, the United States is poised to have the world’s largest L.N.G. export capacity.

Current sanctions that nations have imposed on Russia do not directly target its oil and gas sector, but the Ukraine invasion is expected to disrupt supply routes and has stoked fears that Russia could curtail shipments.

In the United States, Republicans have said the Russian invasion of Ukraine underscores the need to aggressively drill for more oil and gas in the United States to provide Europe with an alternative. Senator Kevin Cramer, Republican of North Dakota, on Tuesday called Mr. Biden’s opening of the strategic reserve “a thimble in the ocean.”

White House officials said Mr. Biden wove climate change and clean energy throughout his speech. He noted that Ford and GM are investing billions of dollars to build electric vehicles, creating millions of manufacturing jobs in the United States. He also noted that funding from the infrastructure package will build a national network of 500,000 electric vehicle charging stations.

But climate change policy is at a critical juncture in the Biden administration. The President’s centerpiece legislative agenda, which he had called the Build Back Better act, is dead. Democrats still hope to pass approximately $500 billion of clean energy tax incentives that had been part of the package, but opportunities to do so are waning. If that investment does not come through and the Supreme Court also restricts the administration’s ability to regulate emission, Mr. Biden’s goal of cutting United States emissions roughly in half compared with 2005 levels could be essentially unattainable.

Even if climate wasn’t the stated focus of Mr. Biden’s Tuesday address, administration officials said that Russia’s war against Ukraine has not pushed climate change off the agenda. They noted that Mr. Biden has made climate change an emphasis in virtually every federal agency, and has moved ahead with major clean energy deployments including a record-breaking offshore wind auction last week that brought in more than $4 billion.