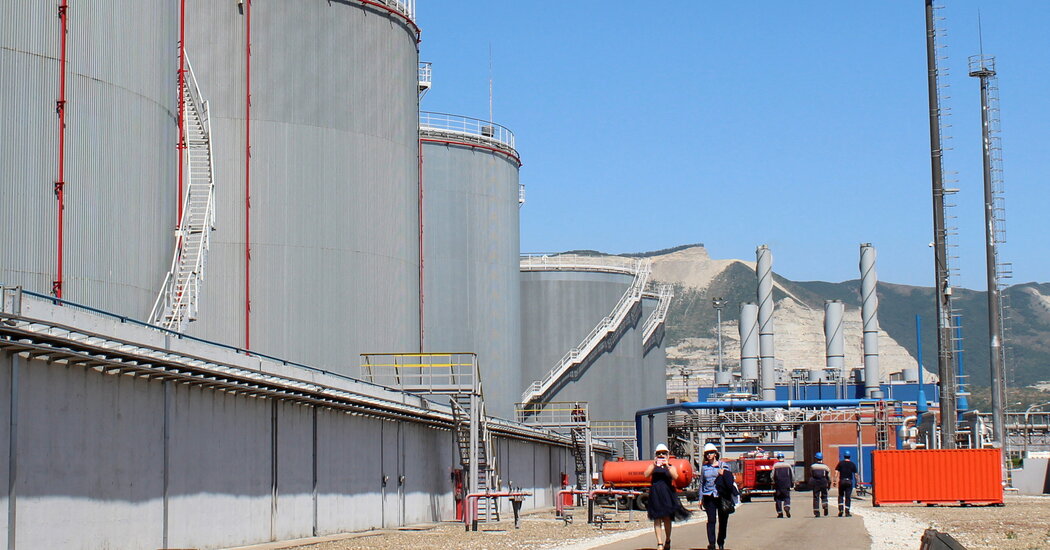 Oil tankers from around the world, including several chartered by U.S.-based companies, are continuing to transport millions of barrels of oil out of Russian ports, a top adviser to Ukraine’s president said, as he made a plea to the White House to restrict all trade in Russian oil by American companies.

In an interview from Kyiv overnight on Tuesday, Oleg Ustenko, an economic adviser to President Volodymyr Zelensky, also urged the chief executives of Western oil and gas companies to pledge to not handle oil from Russia, and to hire independent accounting firms to verify that no Russian oil is being loaded onto their ships.

“We’re talking about supplying Russia with bloody money that they’re using to feed a military machine that is killing my people,” Mr. Ustenko said. “We need a full embargo, a full boycott. All Russian ports must be closed.”

Complicating the picture is the fact that one of Russia’s major oil terminals, the port of Novorossiysk, on the Black Sea, is a hub for a pipeline that carries oil from neighboring Kazakhstan that is blended with Russian oil, according to the pipeline’s operators. Experts say that can make it difficult to pinpoint the oil’s origin.

The continued oil trade out of places like Novorossiysk — much of it with Europe, which is heavily reliant on oil and gas imports from Russia — highlights the loopholes that allow Russian producers to continue to export their oil, Mr. Ustenko said, and even profit from high global oil prices, which rose sharply after Russia’s invasion of Ukraine.

Mr. Ustenko said American companies were abetting that trade. He cited as an example a tanker chartered by Chevron, the U.S. oil giant, which left Novorossiysk on Friday carrying nearly 100,000 tons of crude and is currently en route to the Netherlands. According to independent shipment data, the tanker, the Mediterranean Voyager, is carrying a crude oil blend.

Separate data gathered by Ukraine on ships contracted to load oil at Russian ports in the next two weeks included at least five other Chevron-chartered tankers.

In a statement, Chevron said the oil aboard the ship originated in Kazakhstan and that the company’s “efforts are carried out in compliance with U.S. law.” The company added that “access to Kazakh energy supplies remains very important for consumers around the world.” Chevron also said it did not have exploration or production operations in Russia.

President Biden banned new U.S. imports of Russian oil, gas and coal in response to Russia’s invasion of Ukraine. But those rules don’t prohibit the shipping of oil, Russian or otherwise, from Russian ports to destinations in other nations. Still, Mr. Ustenko said the trade violated the spirit of the embargo and he urged the White House to ban American companies from handling Russian oil and gas exports, regardless of destination.

Biden administration officials have stressed that Washington’s restrictions go much further than those of other nations, including major U.S. allies in Europe, which have yet to cease energy imports. Europe is particularly reliant on Russian gas, and could face debilitating energy shortages if it cut off all supply. Much of the world has also placed severe financial restrictions on Moscow.

A spokeswoman for the National Security Council said the United States was able to put in place its fossil-fuel embargo, in addition to an array of other restrictions on Russian business activity, “because of our strong domestic energy infrastructure” and that it would deprive Russian President Vladimir V. Putin of the resources he needed to wage war in Ukraine. But Washington also recognizes “that not all of our allies and partners are currently in a position to join us,” she said.

In recent days, numerous Western oil and gas companies have also said that they will cease operations in Russia, including abandoning joint ventures with state-owned producers. And some large carriers have said they will no longer transport Russian oil or gas, and traders have reported dwindling takers.

Still, Ukraine estimates that Russian ports will continue to ship out at least 1.5 million barrels of crude oil and other oil-based products a day in the coming weeks — a significant decline from the four to five million barrels of crude they typically handled before the invasion, but enough to earn Russian producers about $700 million a day. Oil, gas and coal make up the vast majority of Russia’s exports.

Mr. Ustenko criticized Greek shipping companies, in particular, which he said own many of the tankers that continued to transport oil from Russian ports. He called on the Greek government to ban those shipments, and he also called on the German government to lead the European Union toward a physical oil boycott and to stop paying Russia for gas, instead putting funds into an escrow account to be paid once Russia sued for peace.

Simon Johnson, an economics professor at the M.I.T. Sloan School of Management and a former chief economist at the International Monetary Fund, said those shipments exposed a major weakness in the U.S. embargo by allowing Russians to take advantage of higher oil prices and “get a windfall gain on their trade.”

To stem that trade, Washington needed to impose full sanctions — similar to those currently imposed on Iran — that would ban U.S.-based companies from all trade with Russia. “The only way to deal with that is to make sure they export nothing,” Mr. Johnson said. “It’s not complicated.”

Energy experts have warned the blended oil from the pipeline at Novorossiysk could potentially provide a route allowing Russian producers to continue to get oil out to global markets with the product’s origins obscured. According to the pipeline’s operators, over the past two decades it typically carried a blend of about 13 percent Russian oil. The consortium that owns the pipeline is 24 percent owned by the Russian state.

Agnia Grigas, a senior fellow at the Atlantic Council and an expert on energy and geopolitics in Eastern Europe, said the spirit of the U.S. import ban should already impede American companies from doing trade in that oil. “It’s near impossible to distinguish the origin of the oil particles,” she said.

“If that oil was bought from Russian traders, the implications are the same,” she added, because the net effect would be that Russian traders would be making a profit from the transactions.

Biden administration officials have said that while the United States has tried to lead by example, it has refrained from disrupting other countries’ energy needs, for example by banning U.S. companies from delivering Russian oil to those nations.

The turmoil in oil and gas markets has spurred calls for a more rapid transition to renewables like wind and solar power. Mr. Ustenko said that the crisis could ultimately spur more investment in green energy. “In the long run, everybody is going to benefit,” he said.

Public censure of companies that continue to trade with Russia has been swift. Earlier this month, Royal Dutch Shell bought a shipment of Russian oil at a heavy discount of just under $30 per barrel and was forced to quickly pledge not to make future purchases.

In a televised address in Ukraine on Tuesday, President Zelensky made an appeal to people worldwide to boycott Russian products. “Everything is in your power,” he said. “All business with Russia must be stopped.” On Wednesday he made a direct appeal to the United States Congress by video.