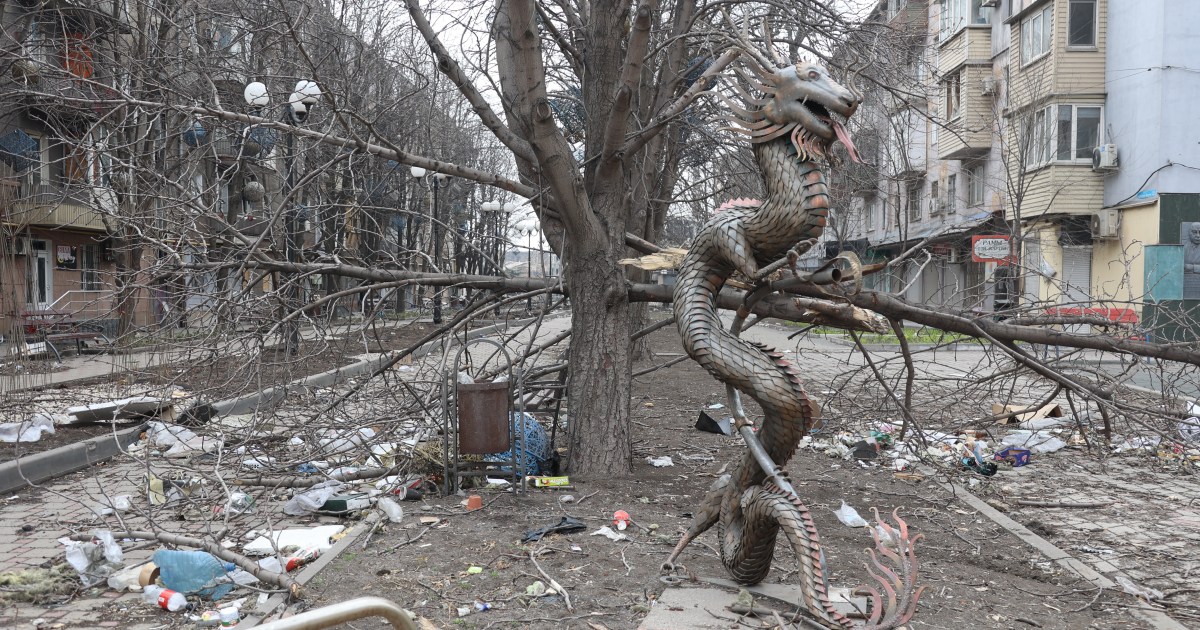 Vinnytsia, Ukraine – On Monday, Eduard Basurin, the spokesman for the pro-Russian separatist “People’s Republic of Donetsk“, appeared on a Russian television channel and stirred fears over the possible use of chemical weapons in Ukraine.

“I think that [Russian troops ] should turn to the chemical warfare forces who would find a way to smoke the moles out of their holes,” he said in televised remarks, referring to Ukrainian service members in Mariupol.

For weeks, Ukraine’s Azov Battalion fighters have been holed up in an underground maze in the besieged southern city beneath a sprawling metallurgical plant, repelling dozens of Russian attacks – and stalling Moscow’s plans to create a land bridge between the separatist areas in Ukraine’s southeast and annexed Crimea.

The underground corridors could be a harrowing place to use chemical weapons, which have limited use on the open-air battlefield because armed forces are usually equipped with protective gear.

Basurin’s words followed remarks by Azov leader Andriy Biletsky, who claimed on Monday that a Russian drone had sprayed a chemical gas over the battalion’s positions.

“As to the practical side of the strike – it wasn’t big. Three people have clear signs of chemical poisoning, but without any catastrophic consequences,” Biletsky said in a Telegram-posted video.

According to a Moscow-based expert, Russia may use “non-lethal special substances” to incapacitate the Ukrainian troops.

He said that such substances had been used during the 2002 hostage crisis in Moscow, when Russian special forces used an aerosol on dozens of Chechen fighters who seized a theatre with hundreds of spectators inside – an incident in which more than 100 people died.

“Our nation will hardly use chemical weapons even if there are some left. But special substances – possibly,” Nikulin, who has taken controversial positions  was quoted as saying.

As part of the Chemical Weapons Convention, Russia claimed to have destroyed all the chemical arms it possessed.

Russia never disclosed the formula of the agent that sedated the Chechen fighters and spectators; independent media reports alleged that most victims were killed by the agent.

Western academics later said that the aerosol was a mix of two opioid-based anaesthetics – carfentanil, a potent substance used as a tranquilliser for large animals and remifentanil, a strong morphine-like painkiller.

‘We take this as seriously as possible’

“One of the mouthpieces of the occupiers stated that they could use chemical weapons against the defenders of Mariupol. We take this as seriously as possible,” he said in a video address late Monday. “We treat it with utmost seriousness.”

The Pentagon responded to Zelenskyy, saying that if confirmed, the reports were “deeply concerning”.

United States sanctions imposed on a nation for the use of chemical weapons may include termination of foreign aid and financial assistance, a ban on weapons sales, exports of security-sensitive goods and technologies, bank loans, restriction of imports and suspension of diplomatic ties.

The Pentagon said there had been earlier reports about Moscow’s potential to use “riot control agents, including tear gas mixed chemical agents” but added it could not confirm the claims given the obvious logistical problems of shipping a sample from war-ravaged Mariupol to a Western lab.

Moscow has dismissed Western claims about the possible use of chemical weapons in Ukraine as part of a “smear campaign” against Russia.

Chemical weapons use toxic agents such as chlorine, mustard gas or sarin that quickly poison or kill people. They are notoriously difficult to detect because experts need samples of the substances such as residue, blood or urine tests of victims for costly mass spectrometry and gas chromatography investigations.

Gases such as chlorine dissipate without leaving any traces, making a chlorine attack hard to prove.

The United Kingdom also reacted to the reports, with a minister threatening Russian President Vladimir Putin with sanctions.

“There are some things that are beyond the pale, and the use of chemical weapons will get a response,” James Heappey, minister for the armed forces, told Sky News, adding that if such arms were used, “all options are on the table”.

While chemical weapons were banned in 1972, Russia has been accused of using them in recent years.

In an attempt to kill opposition leader Alexey Navalny, Russian agents were alleged to have poisoned him in 2020 with the Novichok nerve agent, according to laboratory tests in three Western nations.

The Soviet-developed toxin found in Navalny came from the group of chemical weapons that had been used in 2018 in the UK to poison runaway Russian intelligence officer Sergei Skripal and his daughter, Yulia. They survived the attack but spent weeks in a hospital after the incident, which was also blamed on Russia.

The Novaya Gazeta daily, a critical media outlet that recently suspended operations amid a Russian crackdown on dissent, claimed that Novichok was used in 2003 to lethally poison its deputy chief editor, Yuri Shchekochikhin, who led investigations into the corruption of top Russian officials.

And in 2017, the US accused Russia of creating a “disinformation campaign” to help Syrian President Bashar al-Assad’s government cover up the use of sarin gas on rebel forces whose offensive threatened an airbase.

The White House said that intelligence reports and “immense” evidence suggested that the attack did take place in the town of Ghouta in April 2017.