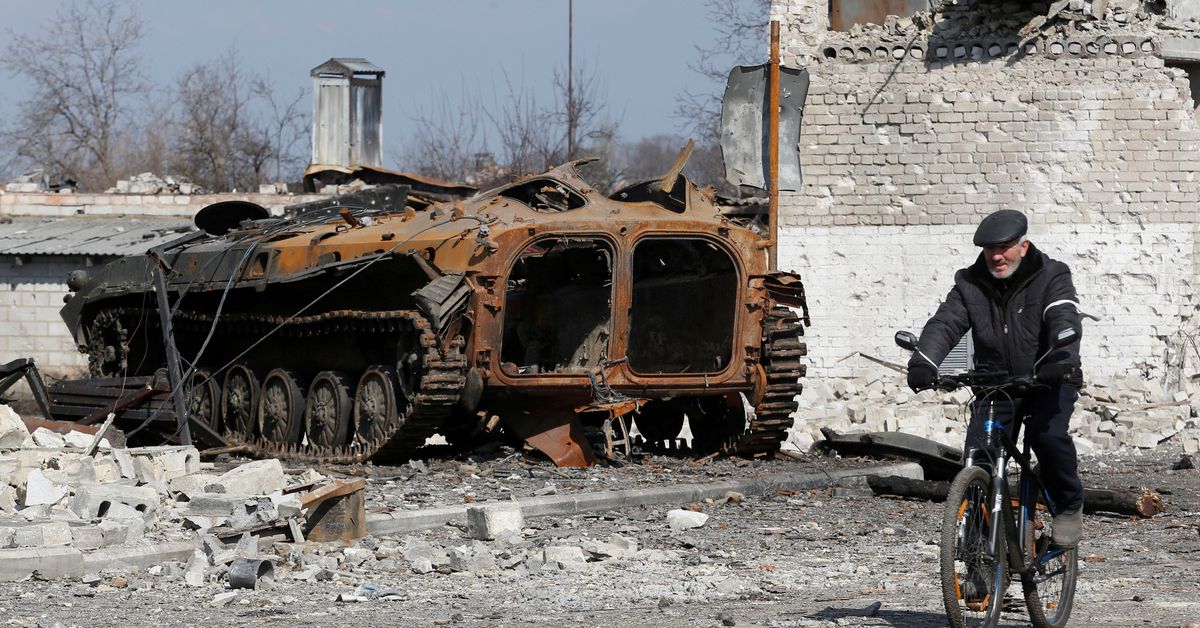 RUSKA LOZOVA, Ukraine, May 16 (Reuters) – Ukraine counter-attacked Russian forces on the eastern front on Monday with fighting reported near its second-largest city of Kharkiv, after Western military agencies said Moscow’s offensive in the Donbas region had stalled.

“It can no longer be stopped … Thanks to this, we can go to the rear of the Russian group of forces,” he said.

The governor of the Luhansk region in the Donbas, Serhiy Gaidai, said the situation “remains difficult”, with Russian forces trying to capture the town of Sieverodonetsk.

He said leaders of the Lugansk People’s Republic, the territory in Luhansk controlled by Russian-backed separatists, declared a general mobilisation, adding it was “either fight or get shot, there is no other choice”.

In the south, fighting was raging around the city of Kherson and Russian missiles struck residential areas of Mykolayiv, the presidential office in Kyiv said.

Reuters was unable to verify the reports.

In a strategic blow for Russia, which has long opposed NATO expansion, Finland on Sunday confirmed it would apply to join the Atlantic military alliance.

NATO and the United States said they were confident both countries would be accepted into the alliance and that reservations from Turkey, which wants the Nordic countries to halt support for Kurdish militant groups present on their territory, could be overcome. read more

Ukraine has scored a series of successes since February, reversing a Russian advance on the capital Kyiv and driving Russian forces out of Kharkiv in the east.

Since mid-April, Russian forces have focused much of their firepower on trying to capture two eastern provinces known as the Donbas.

British military intelligence said Russia had lost about a third of the ground combat force deployed in February, and its Donbas offensive had fallen “significantly behind schedule”.

Moscow calls its invasion of Ukraine a “special military operation” to rid the country of fascists, an assertion Kyiv and its Western allies say is a baseless pretext for an unprovoked war.

Ukrainian troops received a morale boost from the country’s win in the Eurovision song contest at the weekend, with some saying it was a sign of battlefield victories to come.

“We have shown that we can not only fight, but we can also sing very nice,” said Vitaliy, a soldier bunkered down north of Kyiv. read more

The most intense fighting appeared to be around the eastern Russian-held city of Izium, where Russia said it had struck Ukrainian positions with missiles. read more

Russia continued to target civilian areas along the entire front line in the Luhansk and Donetsk regions, firing at 23 villages and towns, the task force added.

There was also no letup on Sunday in Russia’s bombardment of the steelworks in the southern port of Mariupol, where a few hundred Ukrainian fighters are holding out weeks after the city fell into Russian hands, the Ukrainian military said.

Brightly burning munitions were shown cascading down on the steel works in a video posted by a pro-Russian separatist commander. read more

Alexander Khodakovsky, a commander of Donetsk, said on his Telegram channel on Monday that 10 Ukrainian fighters emerged from a tunnel at the Azovstal plant holding white flags. Reuters could not verify the report.

Ukrainian President Volodymyr Zelenskiy said “very difficult and delicate negotiations” were going on to save Ukrainians in Mariupol and Azovstal.

Mariupol resident Natalya said her apartment had been bombed and three neighbours had been killed.