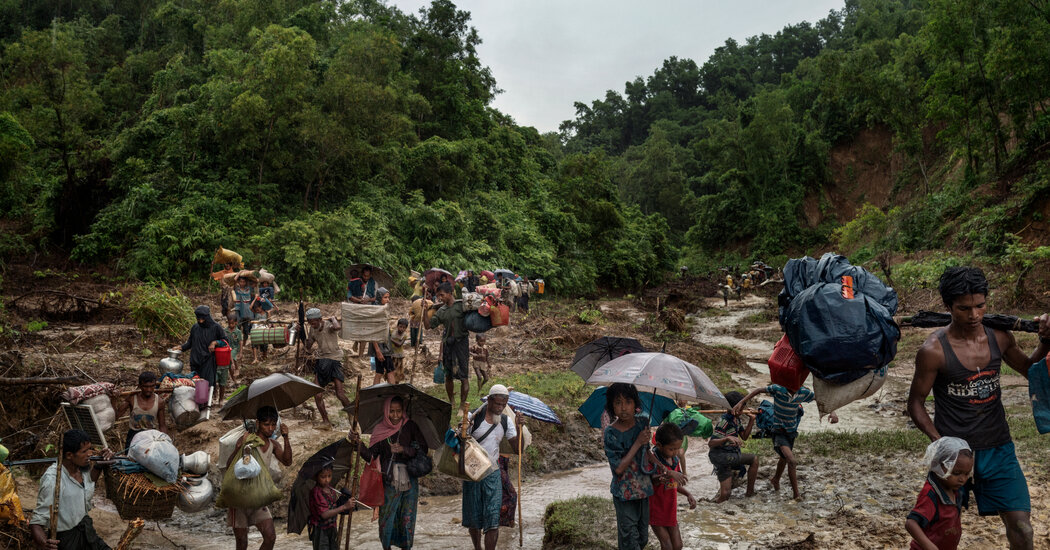 WASHINGTON — Five years after Myanmar’s military began a killing spree against ethnic Rohingya, driving nearly one million people from their country, the United States has concluded that the widespread campaign of rape, crucifixions, and drownings and burnings of families and children amounted to genocide.

Secretary of State Antony J. Blinken is set to announce the determination — a legal designation for crimes that American investigators documented in 2018 — at the U.S. Holocaust Memorial Museum in Washington on Monday. It almost certainly will trigger additional economic sanctions, limits on aid and other penalties against Myanmar’s military junta.

The Tatmadaw overthrew Myanmar’s civilian government and its nascent democratic efforts, led by the Nobel laureate Daw Aung San Suu Kyi, in February 2021. In one of its first acts in office, the Biden administration declared that the military takeover amounted to a coup.

But an internal debate that began during the Trump administration had, until now, delayed a decision on whether the State Department should formally accuse Myanmar of committing genocide against the Rohingya, a minority ethnic group that is largely Muslim.

A senior State Department official confirmed the genocide determination on Sunday, after it was reported by Reuters.

“This is a recognition of the atrocities that have occurred and of the ways in which those atrocities are manifesting themselves even today,” Anurima Bhargava, the past chairwoman of the U.S. Commission on International Religious Freedom, a bipartisan panel that makes policy recommendations to the federal government, said on Sunday.

She said that “those who committed this genocide continue to be in power.”

The decision also comes as the Biden administration grapples with whether President Vladimir V. Putin of Russia has committed war crimes for his military’s indiscriminate and deadly attacks in Ukraine, including against a maternity hospital and a theater that was sheltering children in the southeastern city of Mariupol.

“Given what’s happening in the world, where we’re seeing what can happen if there’s power that goes unchecked, it’s a really critical time for this kind of determination to be made,” Ms. Bhargava said. “Certainly, we would have wanted something earlier.”

In the year that Mr. Blinken and his team have been weighing a declaration, Myanmar has spiraled into a state of constant conflict and economic collapse.

Thousands of civilians from across the country have been killed by the Tatmadaw, fomenting a widespread uprising and a shadow government that oppose the military control. Fighting has reached every part of Myanmar, and the junta has lost control over some territory in northern Rakhine State, where the most intense atrocities against the Rohingya occurred, including violence that intensified in August 2017.

At that time, Ms. Aung San Suu Kyi was Myanmar’s de facto leader. Though she had been championed for years by the United States and other democratic nations, she defended Myanmar from accusations of genocide against the Rohingya during a 2019 appearance at the International Court of Justice that tarnished her international credentials as a human-rights activist.

American diplomats worried that a genocide declaration for the protection of the Rohingya would further undercut her government’s steps toward democracy. Officials also feared that it would inflame animosity against the United States among other populations in Myanmar for appearing to favor the Rohingya’s plight while thousands of other people are suffering under the Tatmadaw.

The Trump administration resisted the declaration in part to maintain an alliance with Myanmar to keep neighboring China off balance in the region. In 2018, the State Department quietly released a report detailing the planned and coordinated nature of widespread violence against the Rohingya in Rakhine State, resulting in mass casualties, including against religious leaders who had been singled out.

Understanding the Coup in Myanmar

The coup was preceded by a contested election. In the Nov. 8 election, Ms. Aung San Suu Kyi’s party won 83 percent of the body’s available seats. The military, whose proxy party suffered a crushing defeat, refused to accept the results of the vote.

But it conspicuously did not conclude that Myanmar’s military had committed genocide or crimes against humanity.

Ms. Aung San Suu Kyi now is among more than 100 elected Myanmar officials whom the country’s military has arrested, and she faces as much as 173 years in prison on 17 charges that her supporters say are trumped up.

With the declaration, the Biden administration appears to have concluded that calling out the human rights abuses is more important than backing Ms. Aung San Suu Kyi’s pro-democracy drive. President Biden has made both values pillars of his foreign policy, and in April went so far as to declare century-old atrocities committed against Armenians by the Ottoman Empire as genocide.

Some American allies — including Canada, France and Turkey — have already declared the monthslong rampage in 2017 against the Rohingya as genocide. Gambia, acting on behalf of the 57-nation Organization of Islamic Cooperation, filed legal action against Myanmar in 2019 at the International Court of Justice, accusing it of violating the U.N.’s Genocide Convention.

International charges of genocide would almost certainly be brought against the military leaders who ordered the atrocities against the Rohingya and who, presumably, remain in power in Myanmar. Ms. Aung San Suu Kyi’s personal culpability is less certain, Ms. Bhargava said, although “we know that those who have taken over Burma currently were in the driver’s seat in terms of the many atrocities are committed in 2017.”

In the nearer term, the Biden administration’s new genocide determination would increase pressure on other nations and foreign companies that have even indirectly helped the Tatmadaw remain in power.

Already, two energy giants — Chevron and the France-based TotalEnergies — have committed to withdrawing from an offshore natural gas field in Myanmar that is a critical source of energy for both the host country and neighboring Thailand. Profits from the field are one of the Myanmar military’s largest sources of revenue, and as recently as last year, Chevron had lobbied the Biden administration against issuing economic sanctions against the country’s state-owned oil and gas industry.