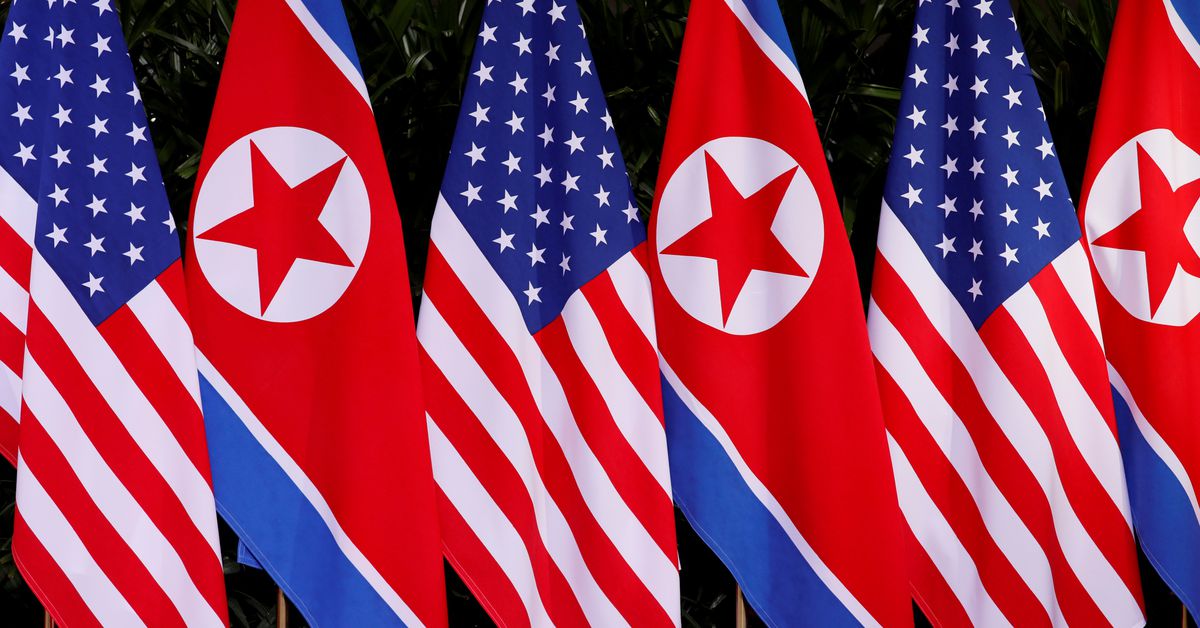 U.S. and North Korean national flags are seen at the Capella Hotel on Sentosa island in Singapore June 12, 2018. REUTERS/Jonathan Ernst

The sanctions, announced by the U.S. Treasury, targeted two Russian nationals and three Russian firms it linked to North Korea’s procurement activities for its missile programs.

The measures come amid concerns that North Korea may soon follow through on threats to resume full testing of long-range ICBMs and nuclear weapons for the first time since 2017. read more

The individuals and companies could not immediately be reached for comment.

“The DPRK continues to launch ballistic missiles in blatant violation of international law, posing a grave threat to global security,” U.S. Treasury Undersecretary for Terrorism and Financial Intelligence Brian Nelson said in a statement, referring to North Korea by the initials of its official name.

“Today’s actions respond to this threat by targeting a network of Russia-based individuals and entities complicit in helping the DPRK procure components for its unlawful ballistic missile systems,” he added.

The sanctions freeze any property held by the individuals or firms in the United States and prohibit business dealings with them.

On Thursday, a senior U.S. official called the recent North Korean launches a “serious escalation” and said it was important for the international community to be united in opposing further development of such weapons.

The official said the steps would be followed by a range of further actions in coming days.

Past U.S. punitive steps and international sanctions at the United Nations have failed to arrest North Korea’s weapons’ development over the years and Russia and China, which backed U.N. sanctions after North Korea’s last ICBM and nuclear tests in 2017, have since urged sanctions easing to encourage dialogue with North Korea.

On Monday, the United States and 10 other countries bemoaned the failure of the U.N. Security Council to condemn North Korea’s repeated missile launches this year, saying this eroded the credibility both of the council and the global non- proliferation regime. read more