U.S. Shutters Warehouse Where Migrants Were Kept in ‘Cages’ 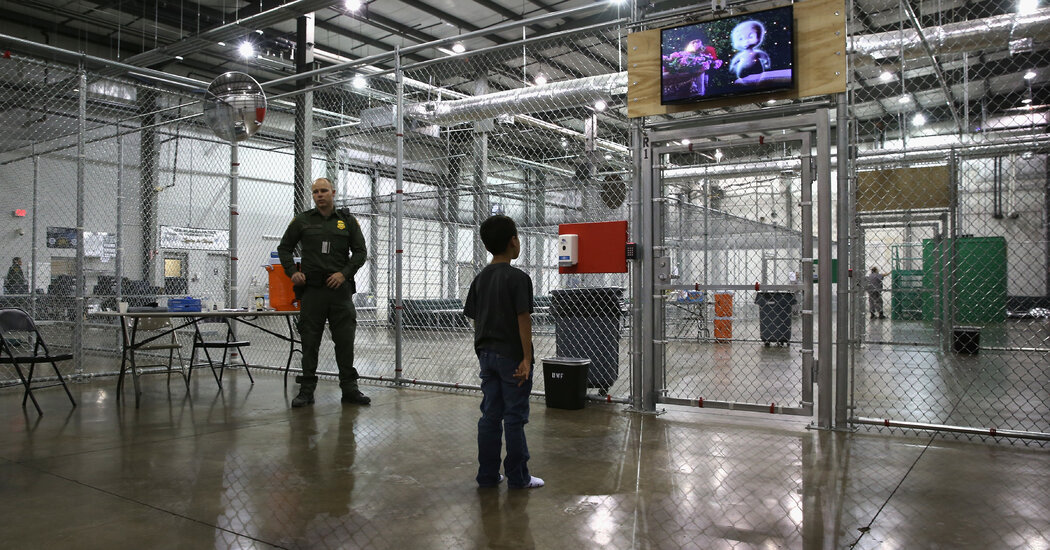 When migrant families and unaccompanied children were crossing the border from Mexico by the hundreds of thousands in 2018 and 2019, they were often jammed into chain-link pens at a massive Customs and Border Protection facility in South Texas. The fetid, overcrowded conditions came to symbolize the Trump administration’s hard-line approach to border enforcement.

“Children were in freezing, packed cages and sleeping on concrete,” said Hope Frye, a lawyer who oversaw a visiting team of inspectors at the Central Processing Center in McAllen, Texas, more commonly known as the “Ursula” warehouse. The faces of the filthy, ailing and often tearful children she met there, locked behind fences, are etched in her memory.

“It was bone-chilling. Young children were violently ill, separated from their family,” recalled Ms. Frye, who had to be hospitalized with a severe case of the flu she contracted during the visit.

On Wednesday, U.S. Customs and Border Protection officials said they had closed the facility that contained the much-debated enclosures for renovation. The agency said the warehouse would reopen in 2022 with improved conditions.

Thomas Gresback, a spokesman for the agency’s Rio Grande Valley sector in South Texas, said in a statement that the facility would have “updated accommodations which will greatly improve the operating efficiency of the center, as well as the welfare of individuals being processed.”

The renovation plan includes room partitions that will “afford modest housing accommodations” and “modern processing areas,” he said, along with a recreational area for children.

At its peak, the facility is believed to have housed about 2,000 migrants, many of them young mothers with children and young people who crossed the border without their parents. The renovated center is being designed to house about 1,100 people.

The renovation, which was earlier reported by The Washington Post, is being paid for with funds allocated by Congress.

The Ursula warehouse was converted in 2014 during the Obama administration into a holding facility for migrants in response to a surge of Central American migrants arriving at the border to seek asylum in the United States.

Because newly arriving migrants were released relatively quickly, the facility never grew as crowded during the Obama presidency as it became in subsequent years, immigrant advocates said.

After President Trump took office, another spike in detentions drew attention to the abysmal conditions many migrants were experiencing and the cages came to represent the harshest aspects of his administration’s crackdown on the border. Migrants called the chain-link enclosures “pereras,” or doghouses, in Spanish.

To slow the arrival of migrants, the administration introduced a policy that forced asylum seekers to wait in Mexico for their immigration court hearings in the United States. This year, amid the pandemic, the president invoked his emergency powers under public health laws to halt most immigration across the border.

As a result, the processing facility has been unused since March. Thousands of border crossers have been turned back to Mexico. Last week, a federal judge ordered the Trump administration to stop expelling young people who arrived on their own looking for asylum in the United States.

Immigrant advocates welcomed the news that the facility would be upgraded but cautioned that more fundamental changes were necessary to ensure that migrants were more quickly and efficiently processed, rather than being stranded in crowded facilities for weeks.

“This feels a little bit like window dressing. It is overdue from the perspective that no one should be housed in cages,” said Michael Bochenek, senior counsel in the children’s rights division at Human Rights Watch.

“The more fundamental shift that needs to happen is rigorous application of federal law and an agency standard that calls for expeditious transfer to more suitable arrangements for children and families,” said Mr. Bochenek, who visited the warehouse in 2018 as part of a monitoring team.

Under the Flores settlement, a consent decree that established standards for the treatment of migrant children, a legal team has the right to inspect all facilities and interview any children detained there to monitor government compliance.

President-elect Joseph R. Biden Jr. has pledged to reverse the Trump administration’s approach on the border. His plan calls for cutting off money for an expanded border wall and restoring the process for welcoming asylum applicants into the country while their cases are being heard.

However, he is likely to face a swell of border crossers from Central America on the heels of recent hurricanes and the coronavirus pandemic, both of which have exacerbated economic distress in the impoverished region.

Last month, more than 69,000 migrants were taken into custody along the southwestern border, a 21 percent increase over September.

Most of them have been handled at other, less-crowded border processing facilities.

Mr. Bochenek, the lawyer, said that during his time at Ursula he at one point counted about a dozen cells, each crammed with up to 140 children.

“Nobody was really looking out for the kids,” he said. “All they had were mats and foil blankets.”

“We talked to teenage girls caring for toddlers in cages. We looked over and saw a boy 7 or 9 years old. The kid was beside himself in tears,” he added. “He was in deep distress and there were no adults anywhere nearby to find out what was wrong.”