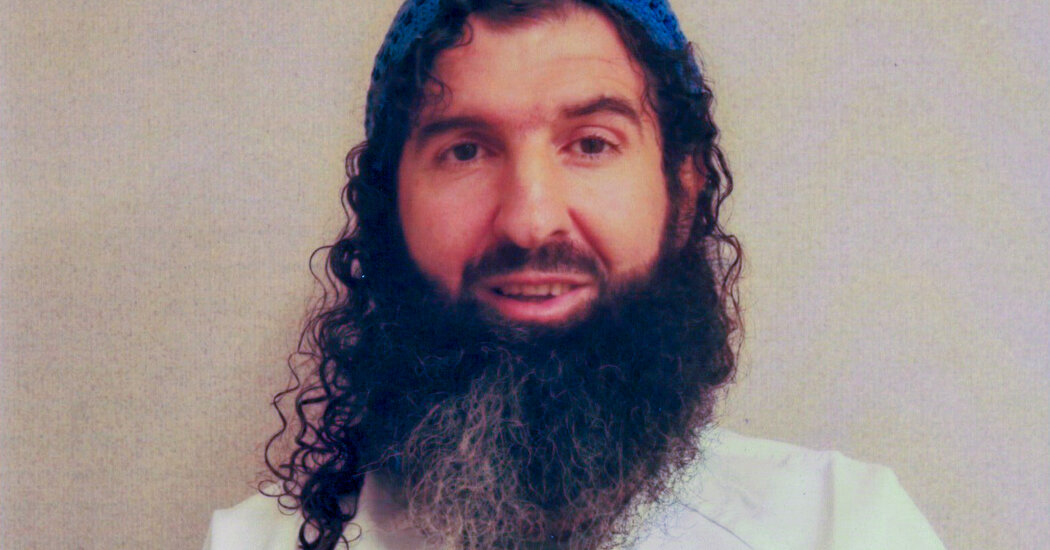 GUANTÁNAMO BAY, Cuba — The U.S. military on Saturday delivered to Algeria a prisoner whose repatriation from Guantánamo Bay was arranged during the Obama administration but then delayed for five years.

The prisoner, Sufyian Barhoumi, 48, was captured in Pakistan in March 2002 and soon taken to Guantánamo Bay, where he never faced trial. He was notified in August 2016 that he was eligible for release, but his case was sidelined by a Trump administration policy that generally halted transfers.

The transfer was the second this year and the third since President Biden took office with the goal of closing Guantánamo. Now, 37 detainees remain, including 18 who are approved for release to the custody of another country if U.S. diplomats can arrange secure deals for them to go.

“The United States appreciates the willingness of Algeria and other partners to support ongoing U.S. efforts toward a deliberate and thorough process focused on responsibly reducing the detainee population and ultimately closing of the Guantánamo Bay facility,” the Pentagon said in a statement on Saturday.

Mr. Barhoumi’s lawyer, Shayana Kadidal of the Center for Constitutional Rights, described the prisoner as one of Guantánamo’s most cooperative captives, a man who helped calm tensions between unruly or frustrated prisoners and Army guards who would typically serve nine-month tours of duty.

In 2017, at the start of the Trump freeze, Mr. Kadidal said, Mr. Barhoumi interrupted the lawyer’s explanation of the politics of his case, declaring: “It’s not you who decides when I leave this place, and it is not politicians. It’s God. He decides when I will go. So I am OK with his decision.”

U.S. officials had planned to transfer Mr. Barhoumi in March, but the mission was delayed by logistics and then by bad weather, which forced a cargo plane carrying the prisoner that was bound for Algeria to turn back.

Mr. Barhoumi’s father died while he was in detention. Once reunited with his family, he will become his ailing mother’s caretaker, Mr. Kadidal said. He should be home in plenty of time for his youngest brother’s wedding this year in Algiers.

Algeria has typically held men returning from Guantánamo for a brief period of questioning. Typical security arrangements with the United States restrict their travel for several years.

The Defense Department notified Congress in January of the plan to transfer Mr. Barhoumi, according to government officials with knowledge of the process, under a statutory requirement of 30 days’ notice. Congress simultaneously received notice of diplomatic and security arrangements for the repatriation to Saudi Arabia of Mohammed al-Qahtani, a mentally ill detainee who was suspected of being the intended 20th hijacker in the Sept. 11 attacks — and was repatriated by the U.S. military on March 7.

The first transfer of the Biden administration took place in July, when the United States repatriated a Moroccan man whose transfer had also been arranged in late 2016 by the State Department’s special envoy, Lee Wolosky. Rather than complete that deal, the Trump administration shuttered the office of the special envoy for the closure of Guantánamo, which has not been reestablished by Mr. Biden’s secretary of state, Antony J. Blinken.

For a time, military prosecutors considered Mr. Barhoumi a candidate for trial as a bomb-making instructor at a safe house in the Punjab region of Pakistan. They abandoned that case, however, after a civilian court ruled that the Pentagon had no authority to charge the civilian offense of “providing material support to terrorism” as a war crime. Mr. Kadidal said that, in time, the government realized it had no evidence to support the case.