U.S. Sending More Troops to Syria to Counter the Russians 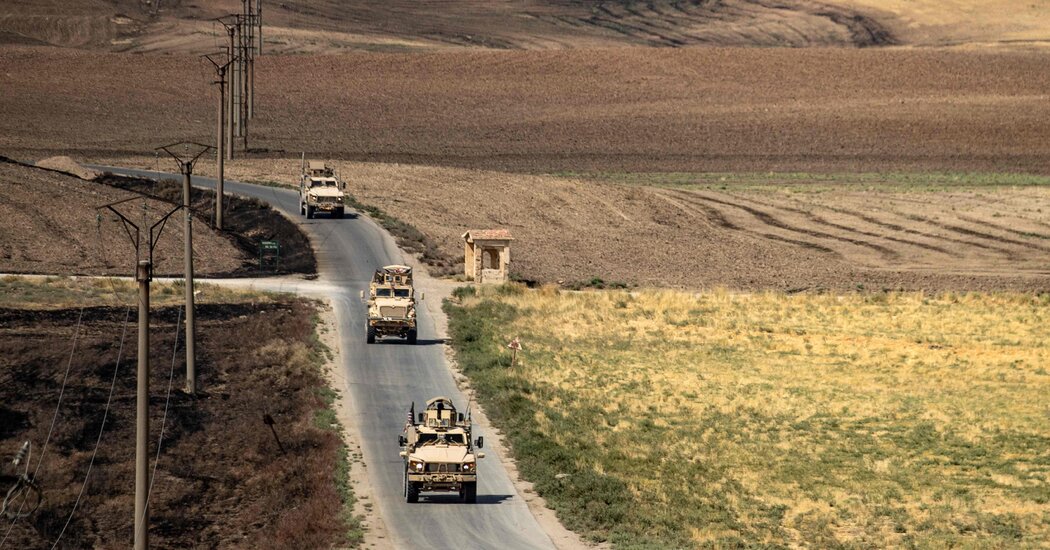 The reinforcements, which add about 100 troops to the more than 500 U.S. forces already there, represent a show of force in response to the clash last month that caught American commanders off guard. They are also likely to escalate tensions between the two rival powers in the country’s hotly contested northeast.

“These actions are a clear demonstration of U.S. resolve to defend coalition forces,” Capt. Bill Urban, a spokesman for the military’s Central Command, said in an email, “and to ensure that they are able to continue their defeat-ISIS mission without interference.”

The new deployment came on the same day that President Trump declared that American troops “are out of Syria,” except to guard the region’s oil fields. “Other than that, we are out of Syria,” Mr. Trump said at White House news conference, making no mention of what the Pentagon says is the main mission there: to help its Syrian Kurdish allies fight remnants of the Islamic State.

The deployment includes a handful of Bradley fighting vehicles — the same that were dispatched for a month to the region last fall — as well as Sentinel radars to track Russian helicopters, and increased fighter jet and Apache helicopter gunship patrols to support American ground forces. It has been in the works since the altercation in Syria revealed the latest Russian test of American military resolve in the region and around the world.

Democrats immediately seized on the episode as the latest example of Mr. Trump’s failure to challenge Russia’s increasing aggressions toward the West, including interfering in this year’s general election and putting bounties on American troops in Afghanistan.

Former Vice President Joseph R. Biden Jr., the Democratic presidential nominee, in a speech in Pennsylvania on Aug. 31, rebuked Mr. Trump for failing to publicly address the altercation in Syria: “Did you hear the president say a single word? Did he lift one finger?”

The latest trouble started on Aug. 25 during what the Pentagon called a routine American patrol near Dayrick, Syria.

Russian military personnel have increasingly had run-ins with U.S. troops on highways in the region, breaking agreements between the two countries to steer clear of each other, American officials say. The United States withdrew from much of that area last fall before a Turkish cross-border offensive.

Videos of the August encounter that later emerged on Twitter appeared to show Russian and American vehicles speeding in an open field, with a Russian vehicle smashing into an American vehicle, and two Russian helicopters buzzing low over U.S. forces uncontested by American air power.

The skirmish set off a war of words and finger-pointing between the two sides.

A White House spokesman called the Russian actions “unsafe and unprofessional” and a violation of a December 2019 agreement to avoid clashes on the ground. Congressional Democrats and Republicans and even some former Trump national security aides criticized the White House response as woefully inadequate.

The next day, Pentagon and U.S. Central Command officials issued tougher statements, condemning the Russian action. Seven American soldiers were treated for concussionlike symptoms at their base in Syria and returned to duty soon after.

The U.S. military’s account contrasted sharply with the Russian version of events. In a phone call with Gen. Mark A. Milley, the chairman of the Joint Chiefs of Staff, shortly after the episode, Gen. Valery V. Gerasimov, the Russian chief of the general staff, said that American troops tried to block a Russian patrol “in breach of the existing agreements,” according to a Facebook post from the Russian Embassy.

General Gerasimov told General Milley that U.S. troops tried to block the Russian patrol, which “took every step necessary to prevent the incident and proceed with its mission,” a characterization American officials rejected.

In an interview last week with The New York Times and two other news organizations, Gen. Kenneth F. McKenzie Jr., the head of the Central Command, continued to blame the Russians.

General McKenzie said American officers in the middle of the fray prevented an escalation. No shots were fired. “What saved the situation was the very good judgment of small unit U.S. Army commanders on the ground,” he said. “I’m just glad I got those kind of people out there making decisions.”

General McKenzie said in another interview last week that tensions with the Russians in Syria had eased for the moment, but he foreshadowed the reinforcements announced on Friday. “Their behavior has been better,” he told NBC News. “I don’t want to judge or project what it might be in the future. But I would simply tell you that we are ready for all eventualities in Syria and the force has what it needs to protect itself.”