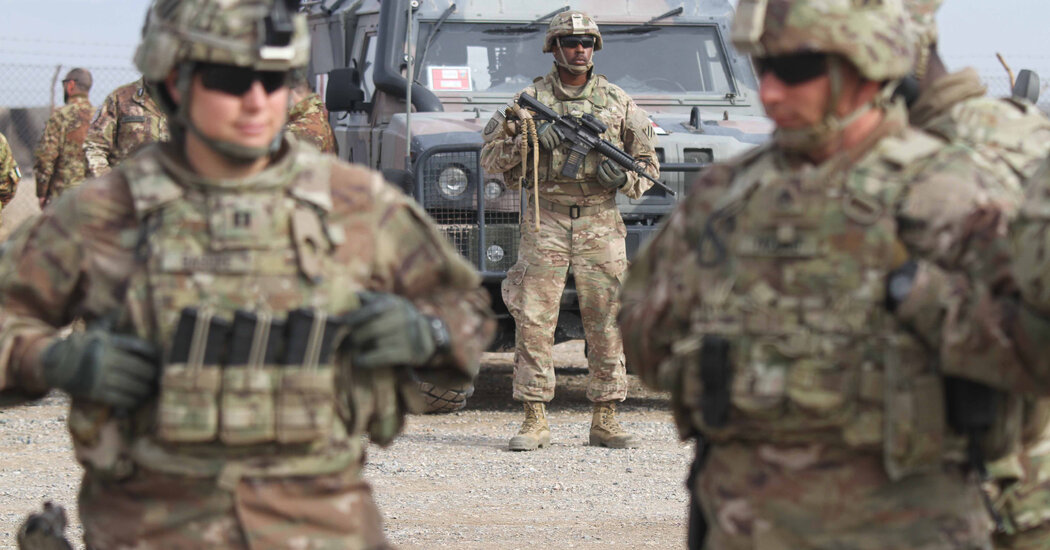 WASHINGTON — President Trump’s national security adviser announced on Wednesday that the United States would cut its troops in Afghanistan to 2,500 by early next year.

But hours later, his boss contradicted him, suggesting a timeline as early as Christmas and prompting confusion among administration officials.

“We should have the small remaining number of our BRAVE Men and Women serving in Afghanistan home by Christmas!” Mr. Trump posted on Twitter.

Asked about the tweet, a senior U.S. military official was silent for a moment before saying, “Oh my God!” The official said he was not aware of such a decision.

But Mr. Trump often takes to Twitter to announce policy, frequently to the surprise of those involved. The president has forecast troop withdrawals, for instance, even without apprising the Pentagon, as he did with Syria in 2018 in a move that prompted the resignation of Defense Secretary Jim Mattis.

The senior U.S. military official, who spoke on the condition of anonymity to discuss internal assessments, raised questions about the timing of the conflicting comments on troop cuts in Afghanistan from Mr. Trump and his adviser, Robert C. O’Brien, which came shortly before the vice-presidential debate started.

Earlier on Wednesday, Mr. Brien forecast a reduction to 2,500 service members from the 4,500 that officials had estimated would remain in Afghanistan by November. That number, administration officials calculated, would give the president the opportunity to try to tell voters that he had wound down America’s longest war. But such a drawdown is likely to be contingent on the outcome of the election.

“When President Trump took office, there were over 10,000 American troops in Afghanistan,” Mr. O’Brien said during an event at the University of Nevada, Las Vegas. “As of today, there are under 5,000, and that will go to 2,500 by early next year.”

Former Vice President Joseph R. Biden Jr., the Democratic nominee, also does not favor a significant troop presence in the country. But should he win office, his administration is likely to conduct a review of Afghanistan policy.

Senior military officials have argued all year that a quick withdrawal from Afghanistan would effectively doom the peace deal reached in February with the Taliban.

In recent months, Mr. Trump has repeatedly voiced a desire to leave the country sooner than the timeline laid out in the Feb. 29 peace agreement with the Taliban, which stipulated that U.S. troops would withdraw in 12 to 14 months if the insurgent group met certain conditions.

The Pentagon has tried to work around a commander in chief who has regularly surprised the military with his decisions. Taliban and Afghan government-backed negotiators, for their part, are still struggling to advance intra-Afghan peace talks, although the two sides recently agreed on a broad code of conduct.

As the discussions have continued, so too has the fighting. In a significant tactical shift, the Taliban have carried out targeted assaults, like bombings and assassinations, to exert pressure while maintaining deniability for the violence.

In Doha, Qatar, where the talks are taking place, chief negotiators from both sides have called for patience, but sticking points remain, like which school of Islamic thought to use for resolving disputes.

While both parties largely agree on using the Hanafi school of Islamic thought, one of the four major Sunni schools that is also the foundation of the current Afghan Constitution, they are at odds on a formulation that does not alienate other sects, particularly the Shia.

“Ultimately, the Afghans themselves are going to have to work out an accord, a peace agreement,” Mr. O’Brien said. He added, “We think Americans need to come home.”