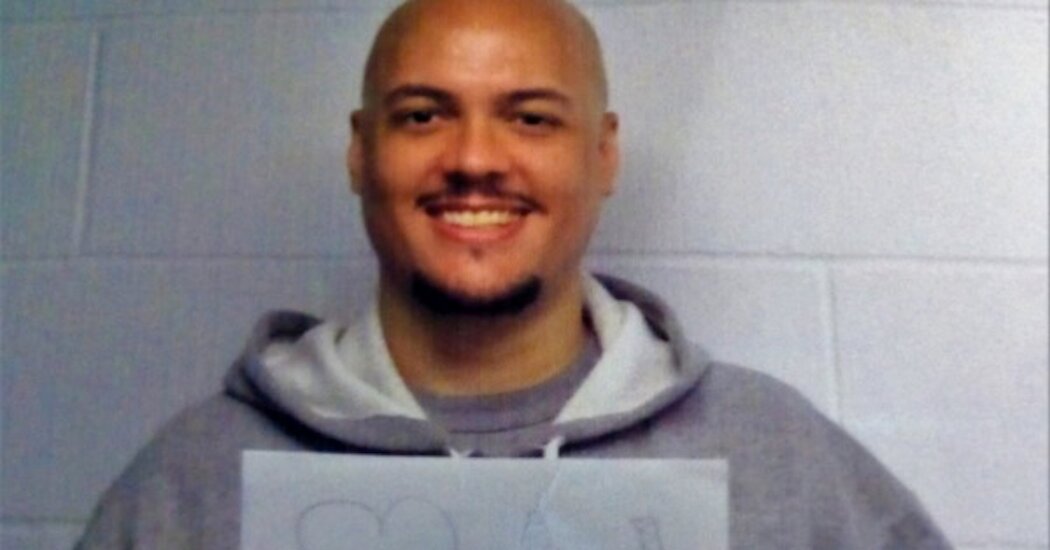 The inmate, Christopher Andre Vialva, 40, was convicted in 2000 of carjacking and murdering the couple, Todd and Stacie Bagley, who were visiting Texas from Iowa and had just attended Sunday services, the Justice Department said.

Mr. Vialva was scheduled to be executed by lethal injection at 6 p.m. Eastern time at the federal penitentiary in Terre Haute, Ind., according to his lawyer, Susan M. Otto, who said Mr. Vialva had asked the Supreme Court for a stay of his execution and had petitioned President Trump to commute his sentence to life in prison.

Mr. Vialva, who was 19 when he murdered the Bagleys, was to be the first federal inmate executed in more than 70 years for crimes committed as a teenager, according to the Death Penalty Information Center, a nonprofit group that studies capital punishment.

His planned execution followed the executions of three federal inmates in July, two in August and one on Tuesday, when William Emmett LeCroy Jr., 50, was put to death for robbing, raping and murdering a 30-year-old nurse in 2001 in Georgia.

The federal government has not executed this many people in a single year since before World War II, according to Robert Dunham, the Death Penalty Information Center’s executive director. But the pace has quickened since Mr. Barr announced in July 2019 that he was lifting what had essentially been a moratorium on the federal death penalty since 2003.

Mr. Barr also issued a protocol replacing a three-drug procedure previously used in federal executions with a single drug, pentobarbital, that was widely available. The drug cocktail had fallen out of favor because of botched executions that prompted a number of lawsuits.

Mr. Barr’s decision countered a national shift away from the death penalty since the 1990s, when public support for capital punishment began to dwindle. Twenty-two states do not allow the death penalty, and three others — Pennsylvania, Oregon and California, which has the largest death row in the Western Hemisphere — have governor-imposed moratoriums.

The United States was one of 20 countries that executed prisoners last year, according to Amnesty International. Most of those executions took place in China, Iran, Saudi Arabia, Iraq and Egypt, the group said.

The six federal executions carried out since July have come as Mr. Trump has campaigned for a second term by casting himself as a defender of “law and order” against Democrats whom he accuses of giving license to violent anarchists and criminals.

Mr. Trump has long been an enthusiastic supporter of the death penalty. In 1989, he placed full-page advertisements in four New York City newspapers, including The New York Times, calling for New York State to adopt the death penalty in response to the case of the Central Park Five, the five Black and Latino teenagers wrongly convicted of the rape and beating of a jogger in Central Park.

The executions also come as nationwide protests over the police killings of Black people have drawn attention to racism in the criminal justice system. This month, a report by the Death Penalty Information Center traced the roots of capital punishment in the United States to slavery, lynching and Jim Crow-era segregation.

Racial discrimination in capital punishment persists to this day, the report said. It pointed to a 2015 analysis that showed that the killers of white people were more likely than the killers of Black people to face a capital prosecution.

Mr. Barr has defended the death penalty by noting that Congress has expressly authorized it. “The Justice Department upholds the rule of law — and we owe it to the victims and their families to carry forward the sentence imposed by our justice system,” he said last year.

About 2,500 prisoners currently face execution in the United States. Fifty-six are federal inmates. The Justice Department has not announced any future executions after Mr. Vialva’s.

Mr. Vialva was a member of a street gang in Killeen, Texas, when he abducted and murdered the Bagleys, according to the Justice Department.

While stopping to use a pay phone, Mr. Bagley agreed to give a ride to Mr. Vialva and two of his accomplices, the department said. In the car, Mr. Vialva pulled out a gun, forced the Bagleys into the trunk, and drove for several hours, stopping at A.T.M.s to withdraw money from the couple’s bank account and trying to pawn Ms. Bagley’s wedding ring.

Mr. Vialva shot and killed Mr. Bagley, 26, and then shot Ms. Bagley, 28, in the face, leaving her to die of smoke inhalation after Mr. Bernard set the car on fire, the Justice Department said. Mr. Vialva and Mr. Bernard were both convicted and sentenced to death in 2000, although no date has been set for Mr. Bernard’s execution.

There was no answer at phone numbers listed for relatives of the Bagleys and their former pastor in Iowa, Bill Tvedt, declined to comment.

Ms. Otto said race had played a “very significant role” in the case. She noted that the Bagleys were white and said that prosecutors had emphasized that Mr. Vialva was the leader of a “Black street gang,” which raised the specter of “organized, marauding Black teenagers in their community.”

“It played into the ‘superpredator’ scenario that was so common during that era,” Ms. Otto said. Only one member of the jury of 10 men and two women that convicted Mr. Vialva and Mr. Bernard was Black, she said.

After his conviction, Mr. Vialva converted to Messianic Judaism and preached about redemption to other death-row inmates, Ms. Otto said.

In a YouTube video this month, Mr. Vialva, wearing a white skullcap and prayer shawl, pleaded with the American public to rethink the death penalty.

“I am not making this plea as an innocent man, but I am a changed and redeemed man,” he said. “I committed a great wrong when I was a lost kid and took two precious lives from this world.”

Every day, he said, “I wish I could right this wrong.”