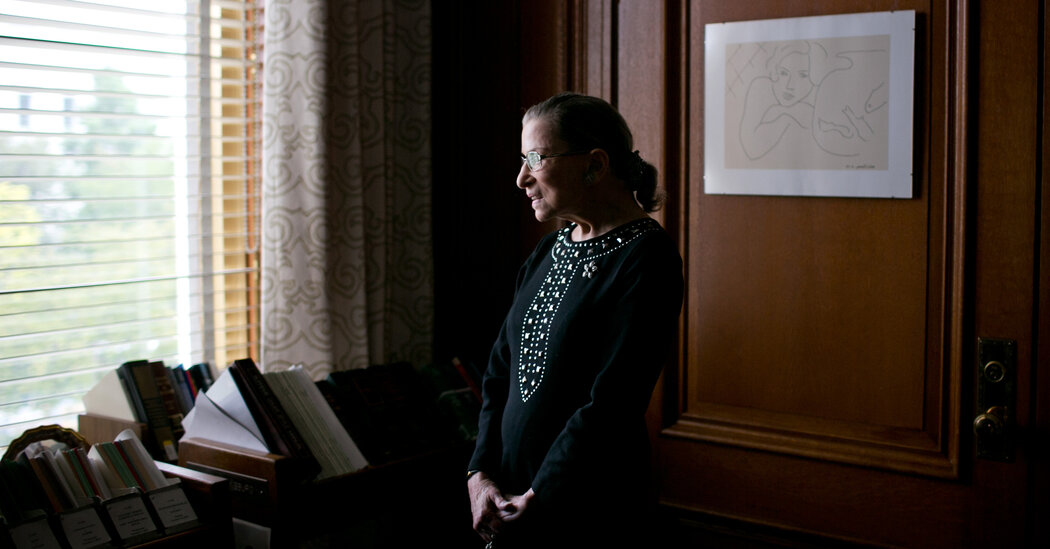 Ruth Bader Ginsburg, the Supreme Court Justice who fought for women’s rights for more than a half century before her death in 2020, will have a U.S. Navy ship named after her, military officials said on Thursday.

The U.S.N.S. Ruth Bader Ginsburg (T-AO 212), which has not yet been constructed, will be a John Lewis-class replenishment oiler ship designed to carry fuel to the Navy’s operating carrier strike groups, the Navy said in a news release.

The class and lead ship, T-AO 205, is named in honor of Representative John Lewis, a Georgia Democrat, who died in July 2020. Mr. Lewis was a stalwart of the civil rights movement and the last surviving speaker from the March on Washington for Jobs and Freedom in 1963.

All of the ships in this class follow a naming convention honoring leaders who have fought for civil and human rights. Other ships in the class are named after Harvey Milk, Robert F. Kennedy, the abolitionists Lucy Stone and Sojourner Truth, and two other former members of the Supreme Court: Earl Warren and Thurgood Marshall.

The oiler ships measure 742 feet long and have the ability to carry up to 162,000 barrels of oil with expansive dry cargo capacity, aviation capability and a speed of 20 knots, the Navy said.

“She is a historic figure who vigorously advocated for women’s rights and gender equality,” Carlos Del Toro, the secretary of the Navy, said in a statement about Justice Ginsburg. “It is my aim to ensure equality and eliminate gender discrimination across the Department of the Navy. She is instrumental to why we now have women of all backgrounds, experiences and talents serving within our ranks, side by side with their male Sailor and Marine counterparts.”

This will be the first U.S. Navy ship to bear Justice Ginsburg’s name and is sponsored by her daughter, Jane Ginsburg. (A sponsor typically attends key events for and maintains close ties with the ship, a spokesman for Navy said.)

Justice Ginsburg died from complications of metastatic pancreatic cancer in September 2020 at age 87. She was the second woman to serve on the Supreme Court.

She developed a rock-star following in her later years and became an unlikely cultural icon to a much younger generation. A law student, Shana Knizhnik, anointed her the Notorious R.B.G., a play on the name of the Notorious B.I.G., the famous rapper who was Brooklyn-born, like the justice. Soon the name, and Justice Ginsburg’s image — complete with a frilly lace collar — became a cultural fixture.

It was announced this week that her famous “dissent” collar, along with other items related to her tenure on the court, including a judicial robe, are being donated to the Smithsonian’s National Museum of American History. The donation by her family coincides with the museum’s decision to award Justice Ginsburg its signature honor, the Great Americans Medal.

Before taking her seat on the Supreme Court in 1993, she had argued six cases before the court from 1973 to 1978, winning five.

Although Justice Ginsburg delivered numerous noteworthy opinions in her career on the court, one of her more notable came in 1996 when she wrote for the majority in United States v. Virginia, a case that opened doors for women to enter Virginia Military Institute.