U.S. Intelligence Tells Congress Putin Is ‘Unlikely to Be Deterred’ 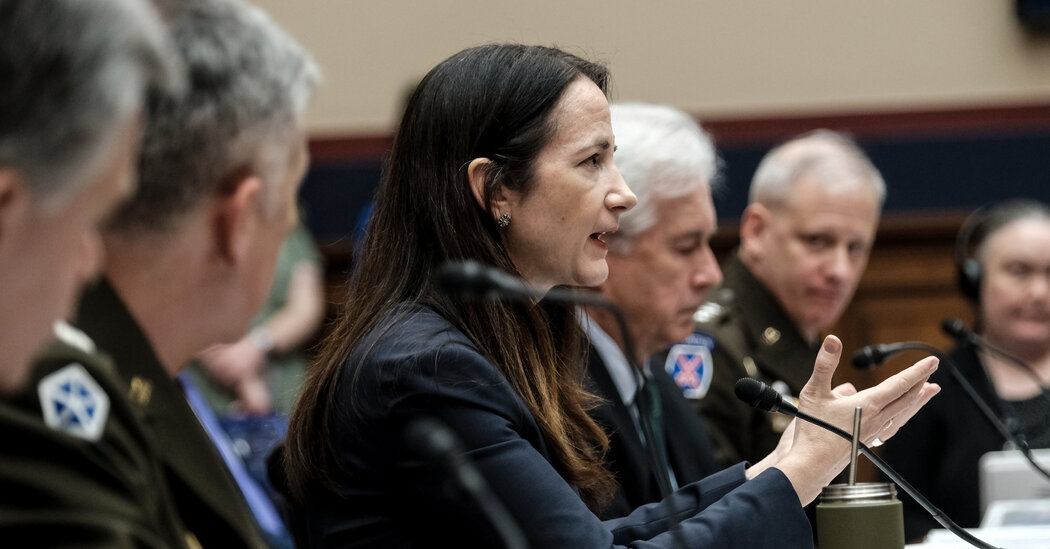 WASHINGTON — Top U.S. intelligence officials said on Tuesday that President Vladimir V. Putin of Russia had been surprised and unsettled by the problems that have hampered his military in Ukraine, issues that will make it more difficult for Russian forces to control the country.

But Mr. Putin is determined to succeed in Ukraine, and will try to double down and use ever more brutal tactics, the officials said during an appearance before the House Intelligence Committee.

America’s intelligence agencies, which before the attack released information on Russia’s troop buildup and war plans, will work to highlight Russian atrocities and crimes, a continuation of the information war that helped rally the West to impose tough sanctions on Ukraine, the officials said.

Before the invasion, Mr. Putin thought the war would be relatively quick, allowing him to rapidly seize Kyiv and overwhelm Ukrainian forces, Avril D. Haines, the director of national intelligence, told lawmakers.

“Moscow underestimated the strength of Ukraine’s resistance and the degree of internal military challenges we are observing, which include an ill-constructed plan, morale issues and considerable logistical issues,” Ms. Haines said.

Controlling all of Ukraine will necessitate even more forces than Russia has committed to the fight, she said.

Some allied intelligence services believe that Mr. Putin’s early military problems could cause him to readjust his plans to take control of the whole country, and stop his advance after he captures Kyiv, particularly if military officers highlight how many additional forces it will require to secure Ukraine.

But diplomats are also quick to add that they are not sure how rationally Mr. Putin is viewing the situation. At the hearing, Ms. Haines said Mr. Putin appeared intent on intensifying his campaign, despite his military’s logistical problems.

“Our analysts assess that Putin is unlikely to be deterred by such setbacks,” Ms. Haines said, “and instead may escalate, essentially doubling down to achieve Ukrainian disarmament, neutrality, to prevent it from further integrating with the U.S. and NATO.”

Given the problems the Russian military has faced, and the rising will of Ukraine to fight, intelligence officials predicted the war would intensify. William J. Burns, the C.I.A. director, is anticipating an “ugly next few weeks.”

“I think Putin is angry and frustrated right now,” Mr. Burns said. He is likely to “try to grind down the Ukrainian military with no regard for civilian casualties,” he added.

Lt. Gen. Scott D. Berrier, the director of the Defense Intelligence Agency, said there was a limit to how long Kyiv could hold on as Russian forces encircled Ukraine and tightened the vise. “With supplies being cut off, it will become somewhat desperate in, I would say, 10 days to two weeks,” General Berrier said.

Other estimates are similar. Some allied governments believe Russia will finish encircling Kyiv in a week and, given the strength of Ukraine’s resistance, the city may be able to hold out for another month, a European diplomat said on Tuesday.

While the intelligence chiefs said Mr. Putin felt aggrieved, Mr. Burns said it would be incorrect to view his actions as crazy.

The Russian leader’s increasing isolation and insulation from conflicting views make him “extremely difficult to deal with,” Mr. Burns said. Without aides willing to push back, Mr. Putin entered the war misunderstanding the will of Ukraine to fight back and the West to take action.

Germany, for example, suspended the Nord Stream 2 pipeline project, which would have allowed imported Russian natural gas to bypass Ukraine; sent weapons directly to Ukraine; and expanded its defense budget.

A halt to Russian sales. After days of seeming reluctance to take a stance over Russia’s invasion of Ukraine, three high-profile American food and beverage companies — McDonald’s, Coca-Cola and Starbucks — said they were pausing operations in Russia.

A humanitarian crisis. Indiscriminate Russian shelling has trapped Ukrainian civilians and left tens of thousands without food, water, power or heat in besieged cities. The United Nations said that the number of refugees who have fled Ukraine has reached two million.

General Berrier said he had low confidence in reports of Russian casualties, but put Moscow’s losses at 2,000 to 4,000.

Mr. Burns said the American government was keeping a close eye on Mr. Putin’s domestic support. With state-controlled media dominating what the Russian public hears and independent reporting on the invasion essentially being made illegal, it will take time for Russians to “absorb the consequences” of Mr. Putin’s actions.

But, over time, funerals of Russian soldiers killed in Ukraine will have an impact, Mr. Burns said.

“You also see, in relatively small numbers, a lot of very courageous Russians out on the street protesting,” Mr. Burns said. “Something like 13 or 14,000 have been arrested since then, which is not a small thing in a deeply repressive society like Russia.”

Other governments said another crucial factor is whether Mr. Putin’s support within the military erodes. Before the invasion, Russian officers complained about the plan, according to intercepts obtained by Western intelligence. The discontent with the Kremlin’s planning now continues, the European diplomat said.

The intelligence community will expand its information war with Russia, working to expose Moscow’s war crimes and atrocities in Ukraine, Ms. Haines said. American spy agencies were working with other agencies to document Russian actions in Ukraine, including war crimes, and to hold the perpetrators accountable.

“Russian forces are at the very least operating with reckless disregard for the safety of noncombatants, as Russian units launch artillery and airstrikes into urban areas as they have done in cities across Ukraine,” Ms. Haines said.

Such an information campaign to expose Russia’s attacks on civilians and other missteps would build on the intelligence released before the invasion, which sought to expose Russia’s war plans, rally allied support for tough financial sanctions and deny Moscow the chance to create a false pretext for an attack.