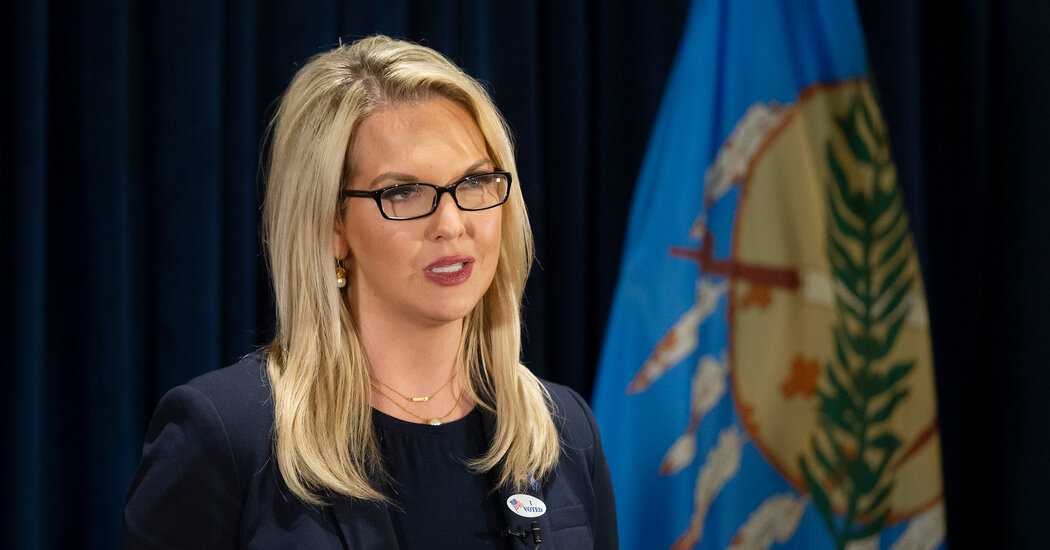 A Democratic candidate for Congress in Oklahoma apologized in a television interview on Friday after parents complained that she drank and verbally abused children attending a sleepover at a friend’s home this month.

The House candidate, Abby Broyles, a former television investigative reporter who ran unsuccessfully for the U.S. Senate in 2020, said that she had no memory of what happened because she had mixed alcohol and a sleep medicine. About eight girls between the ages of 12 and 13 attended the Feb. 11 sleepover, where they watched the movie “Titanic,” according to NonDoc Media, a journalism nonprofit in Oklahoma.

When first contacted by NonDoc Media for comment, Ms. Broyles seemed to deny that she was at the party. After a TikTok video showed otherwise, she gave an interview to KFOR-TV, an Oklahoma City station where she once worked. She did not immediately return a message from The Times on Monday.

In the interview, Ms. Broyles said that she had “blacked out” after drinking wine and taking a sleep medication. She said the medicine was given to her by her friend, whose daughter was having a sleepover when Ms. Broyles came to visit.

“I had an adverse reaction,” Ms. Broyles said. “Instead of helping me sleep, I hallucinated. And I don’t remember anything until I woke up or came to, and I was throwing up in a hamper.”

Ms. Broyles, 32, who is a lawyer, is seeking her party’s nomination in June to run against Representative Stephanie Bice, a Republican in her first term representing Oklahoma’s Fifth Congressional District. A Democrat has held the seat only once in recent history, and for just two years. The district includes most of Oklahoma City.

Citing information from some parents and children who attended the party, NonDoc Media reported that Ms. Broyles had sworn at one girl, while also mentioning that she was Hispanic, and had referred to another girl’s acne, among other abusive remarks. They said that she had vomited into one of the girls’ shoes, in addition to the laundry hamper.

On Wednesday, before Ms. Broyles’s televised apology, Sarah Matthews, whose daughter attended the party, had criticized the candidate on Twitter for failing to reach out to the girls or apologize.

“For someone who pontificates to be undyingly pro woman, I am disgusted by your behavior and find it appalling you couldn’t understand why their parents are angry,” Ms. Matthews wrote. “Your vile, cruel, and bigoted behavior should not be excused.”

In the interview broadcast on Friday, Ms. Broyles told the station that she had struggled for years with stress, anxiety and insomnia but had never experienced anything like what happened at the party.

“I remember starting to hallucinate, and the rest is just blurry,” she said. “I just remember opening my eyes, and I had gotten sick in this hamper and I didn’t know where I was. It was the most awful experience that I’ve had.”

Ms. Broyles said that the actions and words attributed to her were completely out of character.

“First of all, I want to apologize to the families again. And for people who say I just blacked out and I’m making this up, you don’t know me,” she said. “I never, ever would say something hurtful like those things, and that’s why I know I was not in my right mind.”

When asked whether she had a substance-abuse problem, Ms. Broyles answered, “No.”