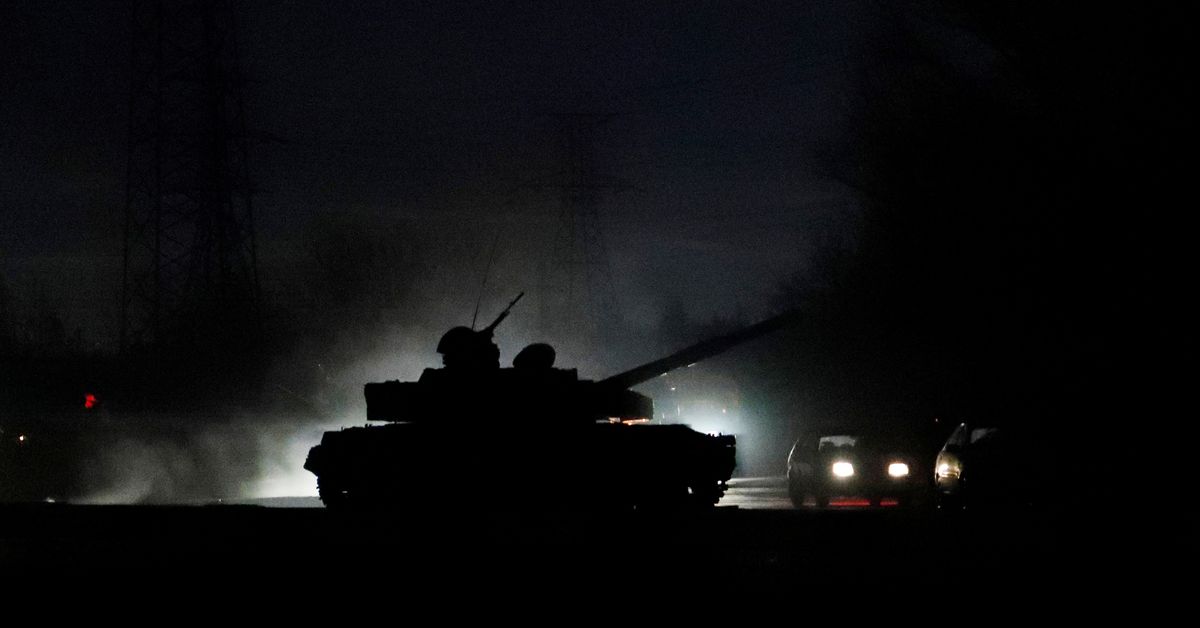 MOSCOW/DONETSK/WASHINGTON, Feb 22 (Reuters) – U.S. President Joe Biden on Tuesday revealed new sanctions on Russian elites and two banks as the West tries to stop an all-out invasion of Ukraine by punishing Moscow for ordering troops to two separatist regions it has recognised.

The European Union, Germany and Britain also announced ways they will hit Russia financially as they fear a further incursion is to come, a move Moscow has consistently denied for months.

One of the worst security crises in Europe in decades is unfolding as Russian President Vladimir Putin ordered Russian troops into eastern Ukraine to “keep the peace.” Washington has dismissed as “nonsense” that justification to deploy troops to the regions of Donetsk and Luhansk after Moscow recognised them as independent.

Both adjoin Russia and have been controlled by Russian-backed fighters since 2014.

Weeks of intense diplomacy have so far failed as Moscow calls for security guarantees, including a promise that its neighbour Ukraine will never join NATO, while NATO members offer Putin confidence-building and arms control steps.

“To put it simply Russia just announced that it is carving out a big chunk of Ukraine,” Biden said on Tuesday at the White House.

“He’s setting up a rationale to take more territory by force,” Biden said. “This is the beginning of a Russian invasion of Ukraine.”

In response to Russia not withdrawing its forces from Belarus to the north of Ukraine, Biden said he had authorized additional movements of U.S. forces and equipment already in Europe to strengthen Estonia, Latvia and Lithuania.

“Let me be clear, these are totally defensive moves on our part. We have no intention of fighting Russia,” he said. “We want to send an unmistakable message though, that the United States, together with our allies, will defend every inch of NATO territory.”

Sanctions are being applied to VEB bank and Russia’s military bank, Promsvyazbank, which does defence deals, Biden said. Starting on Wednesday U.S. sanctions will begin against Russian elites and their family members.

Tass news agency cited Promsvyazbank as saying the sanctions would not have a significant effect since it had taken precautionary measures ahead of time. It did not give details.

The hit to Russia’s sovereign debt meant the Russian government would be cut off from Western financing, according to Biden.

Putin did not watch Biden’s speech and Russia will first look at what the United States has outlined before responding, according to Kremlin spokesperson Dmitry Peskov, cited by Russian news agencies.

A tank drives along a street after Russian President Vladimir Putin ordered the deployment of Russian troops to two breakaway regions in eastern Ukraine following the recognition of their independence, in the separatist-controlled city of Donetsk, Ukraine February 22, 2022. REUTERS/Alexander Ermochenko

Earlier on Tuesday, Germany put the brakes on a new gas pipeline from Russia and Britain also hit Russian banks with sanctions. The Russian foreign ministry criticised the new measures as “illegitimate”.

“Our European, American, British colleagues will not stop and will not calm down until they have exhausted all their possibilities for the so-called punishment of Russia,” he said.

The prospect of a disruption to energy supplies and fears of war – stoked by reports of shelling in some areas and movements of unmarked tanks overnight in the city of Donetsk – rattled markets and sent oil prices to their highest level since 2014.

Germany is Russia’s biggest customer for natural gas, and the decision by Chancellor Olaf Scholz to freeze the Nord Stream 2 pipeline – built but awaiting approval – was widely seen as one of the strongest measures Europe could take.

Germany’s economy ministry will take steps to ensure that certification could not take place for now, said Scholz.

“This is a morally, politically and practically correct step in the current circumstances,” he said. “True leadership means tough decisions in difficult times. Germany’s move proves just that.”

The Kremlin said it hoped the delay was temporary. Putin said Russia “aims to continue uninterrupted supplies” of energy to the world.

Following Russia’s recognition of independence, in Donetsk, some residents were celebrating, with cars flying Russian flags and sounding their horns.

But several blasts were heard in the city on Tuesday, and some people questioned whether Putin’s moves would bring peace.

The Russian-backed separatists in Donetsk and Luhansk broke away from Ukrainian government control in 2014 and proclaimed themselves independent “people’s republics” after a pro-Moscow Ukrainian president was ousted in Kyiv.

“I know that the blood I spilled with my comrades and our labours and efforts and the losses of civilians were not in vain all this time,” Dmitry, a former member of a pro-Russian militia, said in Donetsk on Tuesday.