U.S. Forces Are Leaving a Toxic Environmental Legacy in Afghanistan 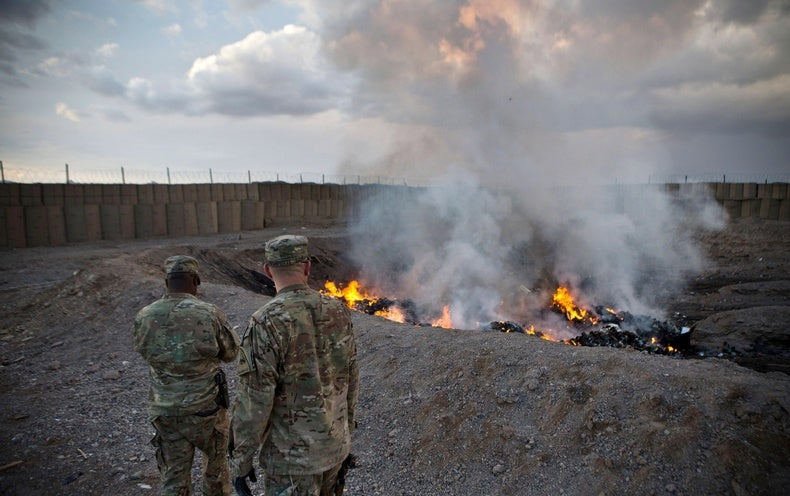 As U.S. forces withdrew from Afghanistan, the Taliban immediately rushed in, and it recently took over the country’s major cities in just a few days. The end of the two-decade American occupation has not only produced a fraught political situation; it has also created an environmental one. Some of the military bases the U.S. handed over to the Afghan national security forces—which this month stood down rather than continuing to contest a seemingly inevitable Taliban victory—hold toxic detritus that may never get a full cleanup.

The U.S. has operated some of these facilities for almost 20 years. As part of the sites’ routine functioning, the American military and its allied partners generated waste, including substances that increase the risk of cancer and other diseases. These materials can produce long-lasting environmental hazards in and around such sites as they seep into the ground, remain exposed in uncovered landfills and—when some items are incinerated—drift into the air as smoke particles.

A defunct military base may produce less pollution than an active one—for example, the uncovered remains of a burn pit present less direct harm than the active release of toxins from burning waste. But such a base still requires some degree of environmental remediation before it can be safely converted to civilian use. In a 2017 report, the Government Accountability Office estimated the final cost of such cleanups in bases closed inside the U.S. between 1988 and 2015 would be nearly $15 billion.

These sites can leave a substantial mark on their surroundings. For example, open-air burn pits are often used to dispose of waste in the field. They are common across areas where the U.S. has fought, despite the fact that an official Department of Defense policy prohibits them “except in circumstances in which no alternative disposal method is feasible.” This is because burning military material—everything from food waste to paint, metal, plastics, medical and human waste, and sometimes unexploded ordnance—can produce toxic smoke contaminated with “particulate matter, lead, mercury, dioxins, and irritant gases,” as outlined in a 2014 report by the Special Inspector General for Afghanistan Reconstruction (SIGAR). Inhaling these contaminants, the report continues, “can negatively affect organs and body systems, such as the adrenal glands, lungs, liver, and stomach,” causing conditions that include asthma, rhinitis and sinusitis. Although the Department of Veterans Affairs has anticipated and tracked related medical conditions among overseas deployments since 2001, the health impacts are hardly limited to uniformed personnel. As the American Public Health Association noted in a statement in 2015, “Afghan citizens face equal, if not greater, risk from exposure to burn pit pollutants. Nationals of the countries where these conflicts have taken place cannot leave as easily as occupying soldiers and must cope with the environmental aftereffects of war.”

Burn pits are primarily a source of harm while actively used to incinerate waste. But long-running or poorly tended burn pits within the U.S. itself have at times been so contaminated that they have been designated Superfund sites even after they were shut down. Contaminants from burn pits can include “polycyclic aromatic hydrocarbons, metals such as lead and copper, or other compounds in soil and potentially in sediment if a surface water body is in the vicinity,” says an official at the New York State Department of Environmental Conservation (NYSDEC). Cleaning up burn pits takes time and is hard enough to do domestically—let alone in a country now controlled by a hostile force.

Understanding the challenge of remediation outside of an active war zone can illustrate the baseline difficulties. For example, one nonmilitary cleanup in New York State focused on a burn pit used by an industrial manufacturer. The process required participants to monitor groundwater for contaminants and build up two feet of soil to enable passive decontamination by beneficial plants. “Long-term, direct contact to humans can be prevented or mitigated by placement of a clean soil cover over the area,” the NYSDEC official explains. But the remediation does not end with soil cover: for this particular burn pit, progress will need to be assessed again next year, about a decade after the effort. Like the site in New York State, long-running burn pits in Afghanistan destroyed solvents (among a variety of other waste), which means they could face similar cleanup problems.

Perfluoroalkyl and polyfluoroalkyl substances, commonly called PFAS, create another durable environmental hazard if they leach into the environment at military posts. These chemicals, which have uses ranging from nonstick pans to food wrappers, are also found in a specialized firefighting foam that many domestic and overseas U.S. bases use to put out petroleum fires. Exposure to PFAS has been linked to symptoms such as increased cholesterol levels, decreased infant birth weight, and a heightened risk of kidney or testicular cancer, among others.

Even within the U.S., cleaning up PFAS at military bases is a difficult process. One factor is that the Department of Defense is still just getting started on actual remediation. A June 2021 report by the Government Accountability Office found that the DOD “is early in the environmental restoration process at or near the 687 [domestic military] installations with a known or suspected release of” PFAS contained in firefighting foams.

In the past few decades, better practices for reducing contamination have somewhat mitigated the situation at U.S. bases. “The environmental remediation and compliance programs at DOD are fairly mature. They really came into their own in the 1990s and then grew from there,” says John Conger, former U.S. acting assistant secretary of defense for energy, installations and environment. “As DOD has been more diligent in compliance programs, the amount of pollution that it inserts into the environment decreases.” Despite this progress, some adaptations—such as the prohibition on burn pits—have only been adopted slowly and have not always been adhered to.

Cleaning up after military bases becomes vastly more difficult outside U.S. states and territories because of legal obstacles and the need for diplomacy with a foreign government. For these locales, the U.S. can fund the remediation of environmental hazards at its bases only while they are in use: when the military withdraws from a base, a specific rule prohibits the DOD from directly spending money or using its resources “to meet requirements that are the responsibility of host nations, as stipulated in applicable international agreements.”

“There is a legal prohibition that exists,” Conger says. “It prohibited the DOD from spending money for environmental remediation in other countries. So it’s against the law for [the DOD] to spend money there on cleanup.” A version of this rule was adopted in 1995 as part of the post–cold war realignment of U.S. forces across the globe. It specified that the U.S. could fund environmental remediation at a base in a host country—but that unless it was obliged by a binding international agreement or already approved cleanup plan, the DOD would be prohibited from doing so for a base it no longer occupied. The department can share information about such hazards with the host country to assist in cleanup efforts, however. Just a few years later, the Institute for Policy Studies asserted that the “DOD has exploited this lack of explicit obligation by conducting the absolute minimum of environmental restoration at overseas bases.” The Office of the Assistant Secretary of Defense for Sustainment did not respond to a request for comment.

Because of the legal and practical obstacles, it was unclear what environmental remediation efforts would occur at former U.S. military bases in Afghanistan—even before the Taliban took over the country. Inquiries to Afghanistan’s National Environmental Protection Agency about what cleanup projects happened or were planned at U.S. military bases in Afghanistan were not answered before the change of government. SIGAR declined to comment, instead pointing to published reports. And at press time, the Assistant Secretary of Defense for Energy, Installations, and Environment has not responded to a request for comment. The United Nations Environment Program’s Afghanistan program has been unable to weigh in on hazards at military bases because it is helping ensure employee safety during the Taliban takeover.

“What happens when environmental damage occurs and a host nation or local national does not have the leverage or resources to demand compensation or demand mitigation from the U.S. military?” wrote Jennifer Neuhauser, then a judge advocate at the U.S. Army, in a 2015 paper. With a hostile power now in possession of these sites, the U.S. is unlikely to participate in local cleanup efforts. As Neuhauser stated in her paper, “There are very few enforcement mechanisms under international law to compel U.S. forces to resolve these issues.”