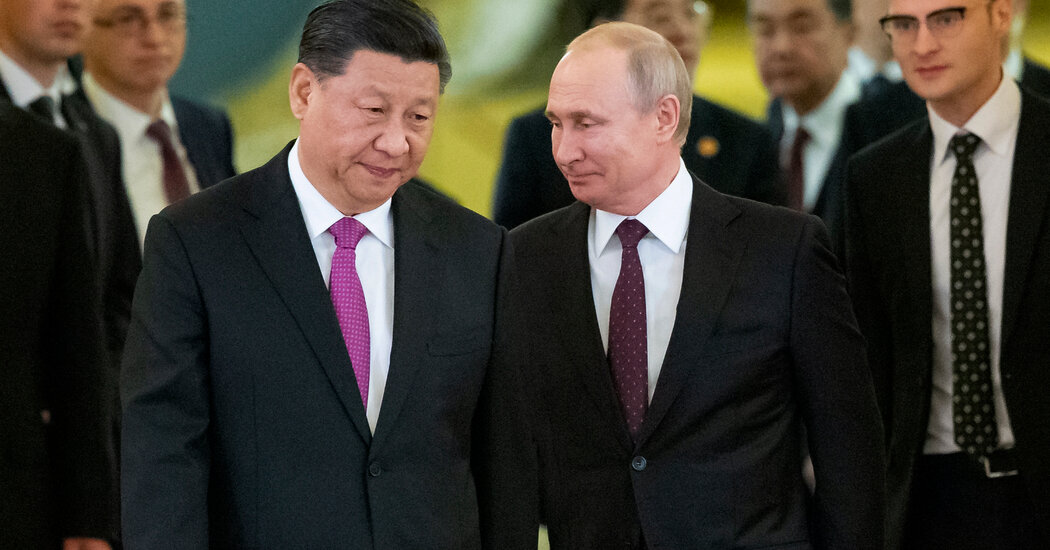 WASHINGTON — One of Russia’s most incendiary disinformation campaigns ramped up days ago, when its defense and foreign ministries issued statements falsely claiming that the Pentagon was financing biological weapons labs in Ukraine.

Then Chinese diplomats and state media organizations repeated the conspiracy theory at news conferences in Beijing, in articles and on official social media accounts.

Now, the Biden White House has taken the extraordinary step of calling out both countries on their coordinated propaganda campaign and saying they might be providing cover for a potential biological or chemical weapons attack on Ukrainians by the Russian military.

“Now that Russia has made these false claims, and China has seemingly endorsed this propaganda, we should all be on the lookout for Russia to possibly use chemical or biological weapons in Ukraine, or to create a false flag operation using them,” Jen Psaki, the White House press secretary, wrote on Twitter on Wednesday evening. “It’s a clear pattern.”

She called the accusations “preposterous,” and said the United States “does not develop or possess such weapons anywhere.” The State Department labeled the assertions “total nonsense” and said Ukraine has no biological weapons labs. Top American intelligence officials reiterated those points in a Senate hearing on Thursday.

The Biden administration and its European and Asian allies find themselves fighting an information war against both Russia and China as President Vladimir V. Putin of Russia continues his military onslaught in Ukraine.

The Chinese government’s promotion of Russian disinformation in the middle of the war has ignited concern among Western officials because of China’s powerful diplomatic standing and extensive cyberabilities. Analysts who study disinformation from the two nations said this was the first time they had seen this scale of amplification between Beijing and Moscow around a conspiracy theory.

“I can’t think of another active propaganda campaign by Russia that has gotten this level of boost from China,” said Bret Schafer, who tracks disinformation from China, Russia and Iran as a senior fellow for the Alliance for Securing Democracy, a Washington nonprofit group. “I haven’t seen this volume around something like this.”

It is the latest display of the close alignment between Beijing and Moscow, which the two nations said had “no limits” in a 5,000-word statement issued when Mr. Putin met with President Xi Jinping of Beijing on Feb. 4. Around that time, senior Chinese officials asked senior Russian officials not to invade Ukraine before the end of the Winter Olympics in Beijing, according to a Western intelligence report.

Starting last November, American officials quietly held talks with Chinese officials, including the ambassador in Washington and the foreign minister, to discuss intelligence showing Mr. Putin’s troop buildup to persuade the Chinese to tell the Russians not to launch a war, but were rebuffed, U.S. officials said.

William J. Burns, the C.I.A. director, said Thursday in the Senate hearing that he believed Mr. Xi was “unsettled” by the Ukraine war and appeared to not have been told by his own intelligence services what would unfold.

Chinese officials have publicly sided with Russia throughout the war, denouncing the United States as the cause of the conflict and emphasizing Mr. Putin’s grievances about NATO enlargement, while also expressing concern over the humanitarian crisis. On Tuesday, Mr. Xi repeated China’s standard talking points on the war in a video call with the leaders of France and Germany, though he added that China was “deeply grieved by the outbreak of war again on the European continent,” according to a Chinese readout. He did not say Russia had started the fighting.

Using news conferences, state media and the social media accounts of diplomats around the world, China has been trying to inflame the situation with fiery rhetoric and conspiracy theories rooted in Russian disinformation, say current and former U.S. officials and independent researchers. As Mr. Xi was talking to the European leaders on Tuesday, Zhao Lijian, a Foreign Ministry spokesman whom many Chinese citizens hail as a fiercely patriotic “wolf warrior” diplomat, raised the issue of biochemical weapons in Ukraine at a news conference in Beijing, asserting that “Russia has found during its military operations that the U.S. uses these facilities to conduct bio-military plans.”

“It has 26 bio-labs and other related facilities in Ukraine, over which the U.S. Department of Defense has absolute control,” he said. “All dangerous pathogens in Ukraine must be stored in these labs and all research activities are led by the U.S. side.”

Mr. Zhao has spread anti-U.S. conspiracy theories to try to deflect criticism of China’s poor handling of the initial coronavirus outbreak in Wuhan and questions over the research of the Wuhan Institute of Virology. He said in March 2020 that the U.S. military might have brought the virus to Wuhan and asserted that research at Fort Detrick, Md., might have been at the root of the pandemic. He mentioned Fort Detrick again on Thursday.

Chinese diplomats, government agencies and state media organizations have used official accounts on Twitter and other social media platforms to spread the Ukraine labs conspiracy theory. A diplomat at the Chinese Embassy in Beirut, Cao Yi, even posted the theory on Twitter in both Arabic and English.

The more than 235 Twitter posts have been split about evenly between Chinese state media accounts and diplomatic or government nonmedia accounts, Mr. Schafer said. There are many more posts on the lab theory on Chinese social media platforms.

Telesur, the Venezuelan state television network, has also amplified the lab theory from Russia, but that activity is minor compared with what China has been doing, Mr. Schafer said.

Variations of the lab conspiracy theory have been circulated in recent weeks by far-right American political figures and groups, including Tucker Carlson, the Fox News host; and QAnon acolytes. Glenn Greenwald, a journalist critical of American military power and security agencies, has said the theory could be true. Even Ai Weiwei, the Chinese dissident artist, has reposted the theory on Twitter.

The Institute for the Study of War, a Washington think tank that tracks the Ukraine conflict, also issued a warning on Wednesday that the Russian statements could be part of an effort to lay the groundwork for Moscow’s own chemical or biological attack. “Russia may conduct or fabricate such an attack and blame Ukraine and NATO to justify additional aggression against Ukraine,” it said.

Chinese state media have repeated the entire range of official Russian statements on the Ukraine war, from the false assertion that Ukraine is full of neo-Nazis to arguments that the United States is an “empire of lies” pulling the puppet strings of Kyiv.

Global Times, a nationalistic newspaper published by the Communist Party, posted an article on Tuesday that said the U.S. government was trying to stir up anger against China over the Ukraine war by planting stories in The New York Times, The Wall Street Journal and Voice of America. Other stories in Chinese state media accused Ukraine of using civilians as human shields, a Kremlin talking point, while avoiding any mention of civilian deaths at the hands of the Russian military.

Censors at Weibo and other Chinese social media companies have deleted pro-Ukraine posts on their platforms.

Mr. Xi and Mr. Putin began promoting greater cooperation between the media organizations of the two countries in 2015, and since then the two governments have held an annual media conference to try to “redefine the map of the international discourse.” Chinese media executives express admiration for RT and Sputnik, Russian state media organizations, for their ability to disseminate messages on a global scale.

The two nations were bound by a Communist ideology in the 1950s, but then split over politics and foreign policy. President Richard M. Nixon exploited that with a historic visit to Beijing in 1972 to normalize diplomatic relations with China. But in recent years, Mr. Xi and Mr. Putin have strengthened their nations’ ties, in large part driven by a shared perception of the United States as a threat and a desire to undermine American global dominance.

The Feb. 4 joint statement had a long section in which the two nations said they would lead the world in establishing true “democracy.”

That drive to stand firm against the United States and Western Europe is showing up in both nations’ propaganda and state media stories, said Maria Repnikova, a professor of global communication at Georgia State University who studies China and Russia.

“There’s a strong undercurrent of anti-Western sentiment and disposition in a lot of these narratives,” she said. “They’re questioning U.S. legitimacy, including by using these conspiracy theories.”

On the Ukraine war, she added, there is a “convergence of Russian and Chinese propaganda about who is to blame, about the roots of the conflict.”

But some Russian news stories and commentary on Thursday questioned China’s commitment to Russia after news agencies reported that China was refusing to send aircraft parts to the country, Ms. Repnikova said. Boeing and Airbus cut ties to Russian airlines after the Biden administration and the European Union imposed sanctions.

Large Chinese companies will likely comply with sanctions to avoid jeopardizing their global commerce. For China, Europe and the United States are much larger trade partners than Russia.