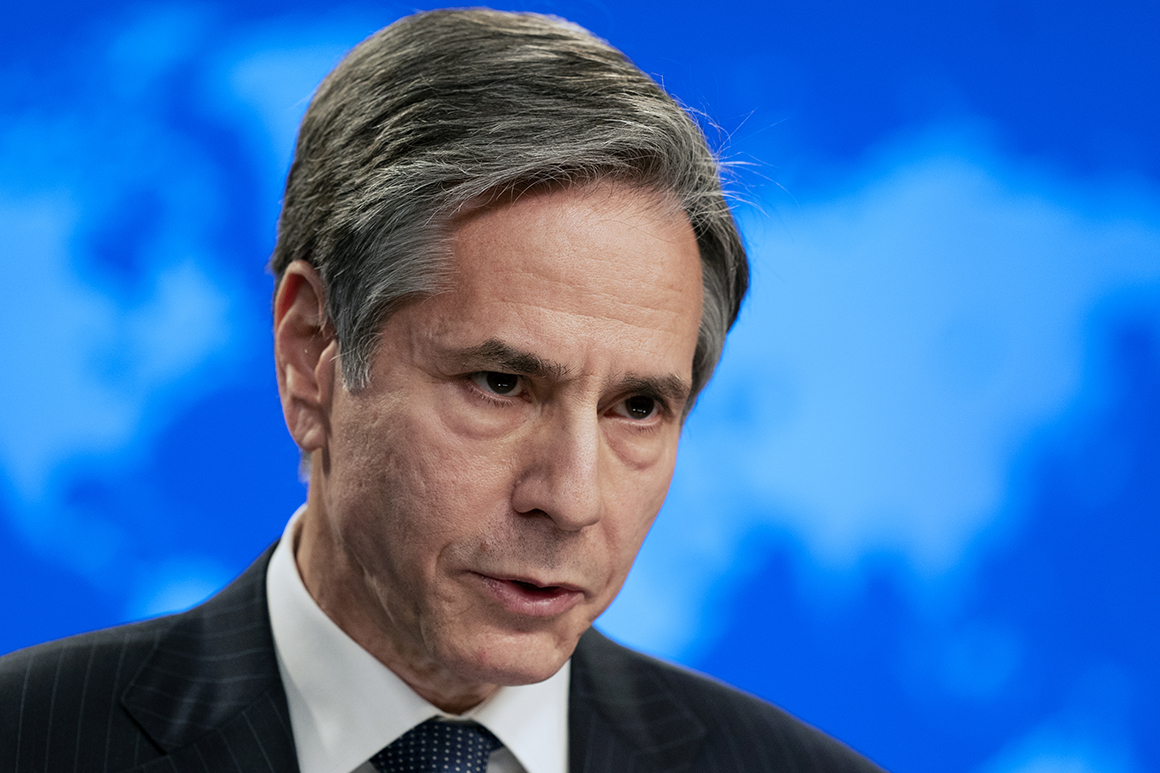 President Alexander Lukashenka of Belarus has in recent months faced increasing opposition to his iron-fisted rule, leading to mass arrests and the departure of some opposition leaders from the country. He has been in power since 1994 in the former Soviet republic.

“This shocking act,” Blinken said, “perpetrated by the Lukashenka regime endangered the lives of more than 120 passengers, including U.S. citizens. Initial reports suggesting the involvement of the Belarusian security services and the use of Belarusian military aircraft to escort the plane are deeply concerning and require full investigation.”

Blinken’s statement followed criticism of Lukashenka — also rendered as Lukashenko — by the American ambassador to Belarus, as well as a number of congressional leaders.

“Lukashenka and his regime today showed again its contempt for international community and its citizens,” U.S. Ambassador Julie Fisher tweeted.

Menendez, the chair of the Senate Foreign Relations Committee, was joined by lawmakers who hold similar positions in the Czech Republic, Germany, Ireland, Latvia, Lithuania, Poland and the United Kingdom. “We, the chairs of our respective national parliament’s Foreign Affairs Committees, condemn unequivocally the threat of violence used against a civilian aircraft in the skies over Belarus,” they said.

Menendez and the others condemned Belarus not only for the act of arresting Protasevich but also for the harm it could have caused everyone on the flight, which was headed from Greece to Lithuania. “This reckless act put the passengers and crew in grave danger. It is a reminder of the illegitimacy of the administration claiming authority in Minsk,” they said.

They urged the International Civil Aviation Organization to keep planes from flying over Belarus and pushed NATO and the EU to sanction Belarus.

Other members of Congress blasted Lukashenka.

“To arrest an activist for simply exposing the truth of the regime-sanctioned police brutality against anti-government protests in Belarus is abhorrent,” said Rep. Michael McCaul of Texas, the leading Republican on the House Foreign Affairs Committee. “To force an Irish aircraft with nearly 200 innocent civilians to land in order to make that arrest is an egregious affront to democratic societies around the world.”

Rep. Chris Smith (R-N.J.) said this episode “should be the final straw” that leads the international community to attempt to force Lukashenka out, saying “every sanction on the books needs to be used” to apply pressure.

“This was not only the hijacking of an airliner but an unprecedented violation of international aviation rules,” Smith said in a statement.

One of the other passengers on the flight told The Associated Press that Pratasevich expressed a fear for his life.

“I saw this Belarusian guy with girlfriend sitting right behind us,” passenger Marius Rutkauskas said after the plane arrived in Lithuania. “He freaked out when the pilot said the plane is diverted to Minsk. He said there’s death penalty awaiting him there.”

Nahal Toosi contributed to this report.