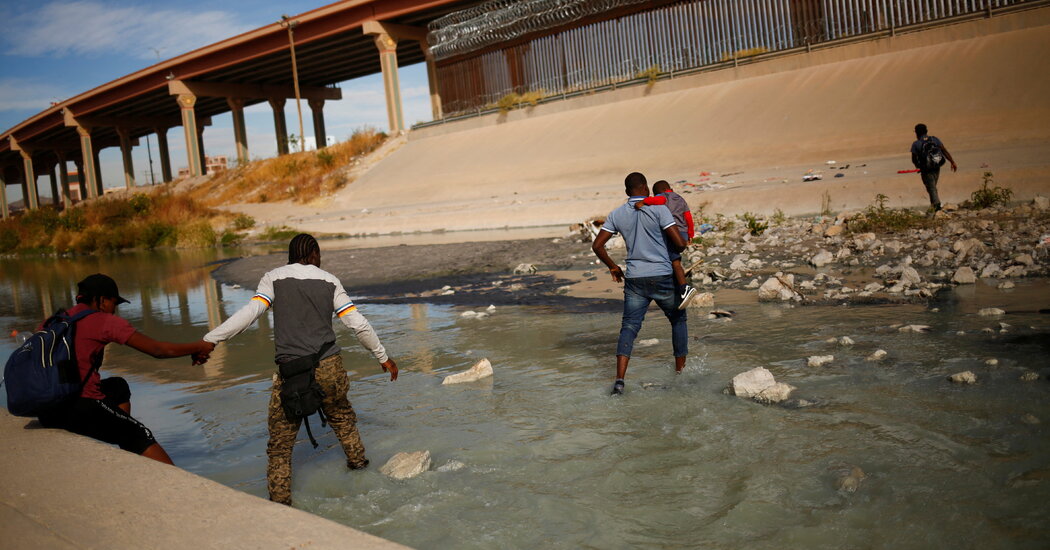 WASHINGTON — A public health rule that has kept many undocumented migrants from entering the country during the pandemic suffered a blow on Friday, when a federal appeals court said it could no longer be used to expel families to countries where they would face persecution or torture.

The ruling, issued by a panel of the U.S. Court of Appeals for the District of Columbia Circuit, partially affirmed an earlier decision in an ongoing lawsuit and applies only to migrant families traveling with minor children. Although it allowed the Biden administration to keep the rule in place, the three-judge panel questioned whether it was still necessary, noting that it “looks in certain respects like a relic from an era with no vaccines, scarce testing, few therapeutics and little certainty.”

Immigration lawyers said the ruling meant that from now on, migrant families will need to be given the chance to express a fear of persecution or torture, which could be followed by an interview with an asylum officer or a court date with an immigration judge — steps that have been broadly denied since the public health rule was put in place in March 2020.

The Biden administration can continue to use the rule, known as Title 42, for families who do not face persecution as well as for single adults, who have made up a majority of the migrants expelled under it. Critics have said that the rule, put in place by President Donald J. Trump, was his most successful effort to restrict asylum.

Even so, many immigration groups, as well as some people inside the Biden administration, see Friday’s decision as the beginning of the end of the public health rule, as the court opinion could make it harder for the administration to justify that single adults who face persecution or torture should be expelled.

After the ruling was issued, some officials at the Department of Homeland Security were summoned to join a call with the department’s secretary, Alejandro N. Mayorkas, to discuss “the end of Title 42,” according to a person familiar with the internal discussion, who spoke on the condition of anonymity in order to discuss internal matters.

Lee Gelernt of the American Civil Liberties Union, one of the lead lawyers for the plaintiffs in the case, called Friday’s development a “huge victory.”

Immigration and human rights advocates have said that President Biden has followed Mr. Trump in using the rule to control illegal immigration, a political vulnerability for him — not to stop the spread of the coronavirus.

“It was enacted by the Trump administration and retained by the Biden administration so they did not need to screen people for persecution,” Mr. Gelernt said, “and could just immediately load families onto planes to Haiti and other dangerous countries without determining what would happen to them.”

One of the highest-profile examples was last September, when thousands of Haitians were expelled back to their country without being given the chance to explain why they feared returning to an impoverished nation that has suffered natural disasters and, in some parts, is run by gangs.

In recent weeks, lawmakers from the president’s own party have been putting pressure on the administration to lift the rule.

The Biden administration did not respond to questions about the ruling or the government’s next steps.

White House officials have said it falls to the Centers for Disease Control and Prevention to decide when the public health rule can be lifted. The agency’s next review of the policy will be in April. Brandon Judd, the head of the Border Patrol union, said agents were hearing that the rule would go away on April 1.

The Biden administration has kept the order in place for all migrants except children who arrive at the border without a parent or guardian, although in practice, the government has allowed many families to stay in spite of the rule. While more than 181,000 migrant families have been expelled under it, many more have been allowed into the country to face deportation proceedings for a variety of reasons, including humanitarian exceptions.

Many Republicans have praised the use of the rule and called it a successful policy. Last year, Senator Ted Cruz, Republican of Texas, introduced legislation to make it a law.

Critics of the rule, including a number of public health experts, have said there is no public health benefit to expelling migrants to prevent the spread of Covid-19 in the United States, especially now. The appeals court appeared to agree.

“To be sure, as with most things in life, no approach to Covid-19 can eliminate every risk,” the panel wrote. “But from a public health perspective, based on the limited record before us, it’s far from clear that the C.D.C.’s order serves any purpose.”

While case numbers and hospitalizations from Covid-19 have been on the decline recently in the United States, the number of migrants trying to get into the country has not decreased significantly. Officials expect even more to come this year than last year.

And expulsions under Title 42 have proved an efficient way to expel undocumented immigrants at a time when a record number have crossed the southwestern border.

“While this ruling can be taken as a win for both sides, it is an event that pales in comparison to a train that is coming down the tracks,” said R.J. Hauman, the head of government relations for the Federation for American Immigration Reform, a conservative group. “As bad as the border crisis is now, without Title 42 it would be a whole lot worse.”

Mr. Judd, the head of the Border Patrol union, said Friday’s decision would not have an immediate effect on operations at the border because most migrant families are already being allowed into the country to face removal proceedings. But if the authority goes away completely, he said, “it’s not going to be good.”

Officials have argued that border agents are overwhelmed and that existing border stations are not capable of holding all of the migrants who need to be processed into the country, a resource-intensive and time-consuming process. Some border officials have feared that without the rule in place, they will be completely overwhelmed and buried in paperwork instead of patrolling the border.

Interviewing migrants about their fears of torture or persecution could take days or even a week, and requires space where migrants can be held humanely until they can be interviewed, said Aaron Reichlin-Melnick, the policy counsel for the American Immigration Council.

“Given those operational realities, actually carrying out reasonable-fear interviews for families is going to be incredibly difficult,” Mr. Reichlin-Melnick said, adding that “the most likely result would be simply to release families who express a fear of persecution.”

Most often it is single adults who are turned away, including many repeat crossers who have so far not faced penalties for getting caught more than once. The government estimates that about 30 percent of the people caught crossing the southwestern border illegally have been caught previously.

One idea under consideration in the administration is to start penalizing repeat crossers and detaining them, according to the person familiar with the internal discussions.