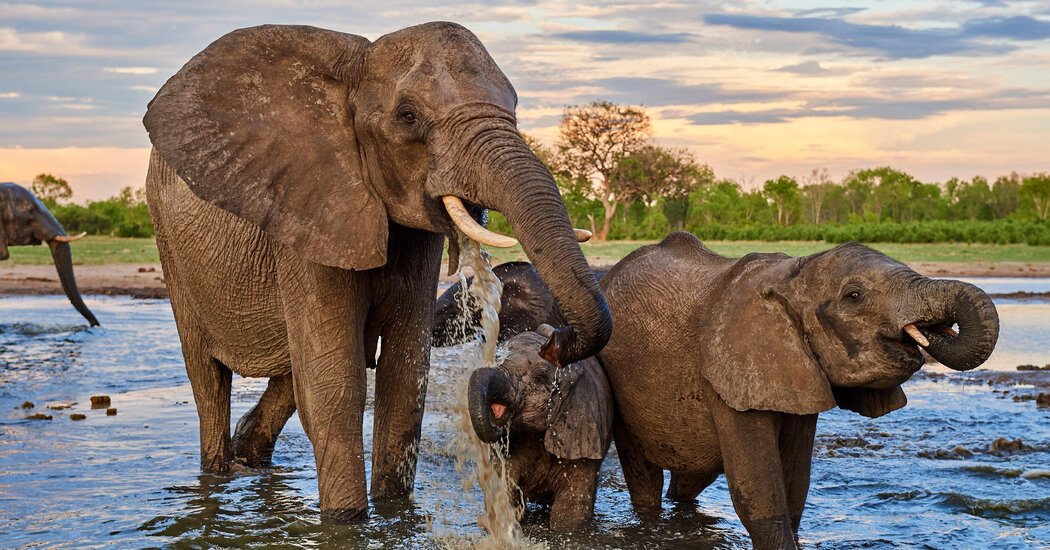 The U.S. Fish and Wildlife Service informed some hunters last month that it would allow the import of six elephant trophies into the United States from Zimbabwe. The African elephant carcasses will be the first allowed into the country in five years.

The decision reverses an agencywide hold on processing elephant trophy import permits that was put in place during the Trump administration in November 2017, and has since prevented any elephant tusks, tails or feet from being brought into the country.

The reversal is the result of a September 2021 settlement with the Dallas Safari Club, a big-game hunting organization that sued the Trump administration in December 2019 for pausing trophy permit processing. The environment and tourism ministry of Namibia was also a plaintiff in the case. The Fish and Wildlife Service is required under the settlement to process the permits of the 11 hunters named in the suit, as well as 73 other outstanding permit applications. That could potentially lead to additional trophies being brought into the United States from countries that allow limited hunting of elephants for sport.

According to a Fish and Wildlife Service spokesperson, both parties “negotiated a settlement they consider to be in the public interest and a just, fair, adequate and equitable resolution of the disputes set forth in the plaintiffs’ complaint.”

The service’s decision to settle the lawsuit continues a long-running dispute between hunters and biodiversity experts over whether trophy hunting is beneficial or harmful to big game species, particularly endangered animals like the two species of African elephants. It has also prompted criticism from activists and biodiversity groups who question why the agency did not fight the lawsuit or reinstate a similar ban that was instituted during the Obama administration.

They point out that the move goes against President Biden’s commitment on the campaign trail to limiting hunting imports. The critics also say it is the latest in a series of confounding steps by the Biden administration to acquiesce to lawsuits leftover from the Trump administration and a failure to invest in more protections under the Endangered Species Act, like conserving more gray wolves. They argue these actions show that Mr. Biden hasn’t kept his word on environmental priorities.

“We expected the Biden administration would have halted everything and taken a hard look and made some tough decisions that maybe this isn’t something we should be doing given the biodiversity crisis,” said Tanya Sanerib, senior attorney at the Center for Biological Diversity. “So to have the reality be the exact opposite of that, it feels like whiplash.”

For trophy hunters and big game groups, the reversal came as a long delayed win.

“It’s a victory for conservation because in a lot of these places where elephants reside, the habitat is only made available because of hunting dollars,” said Lane Easter, 57, an equine veterinarian in Texas whose trophy permit was approved under the settlement for a Zimbabwe hunt he did in 2017.

The majority of trophy hunters are from the United States. Under the federal Endangered Species Act, hunters must prove before they import a trophy that killing the animal aided in the “positive enhancement” of a species.

The Fish and Wildlife Service’s perspective, which predates Mr. Biden’s election, is that trophy hunting can qualify as species enhancement if it’s “legal, well-regulated hunting as part of a sound management program,” the agency spokesperson said.

Big game hunters say that the money they spend on hunts is later invested in the rehabilitation of the species and economically benefits nearby communities, preventing poaching. They also say that hunting certain animals like elephants and lions can benefit overall herd health.

Hunters can spend upward of $40,000 on an African hunt in Zimbabwe, Tanzania, Zambia and Namibia, and many of them win the rights through bidding wars held at national conferences like the Safari Club International’s annual convention.

But groups like Humane Society International say that hunting a species does not benefit its survival and that the Fish and Wildlife Service should not allow paid hunts to qualify as a method of species enhancement, especially on animals the United States considers threatened. The International Union for Conservation of Nature in 2021 revised its listing for both species of African elephant to highlight that both are at greater risk of extinction.

Critics also say there is little proof that money paid for a hunt ultimately helps the species recover, especially when corruption has been found to be rampant in several of the countries where African elephants reside.

“There is no evidence that trophy hunting advances conservation of a species,” said Teresa Telecky, a zoologist and the vice president of wildlife at the Humane Society International.

When Donald Trump was elected president in 2016, big game hunters expected it would be easier to import elephant trophies. The week before Thanksgiving in 2017, the Fish and Wildlife Service reversed an Obama-era ban, allowing hunters to import elephant trophies from several African countries. The news set off a storm of disapproval and criticism, with even staunch allies of Mr. Trump warning the move might increase the “gruesome poaching of elephants.”

Just 24 hours later, Mr. Trump tweeted that he would put the decision on “hold.” After that tweet, not a single elephant trophy was approved for import to the United States.

“Because the president found trophy hunting distasteful he essentially abrogated the law with a tweet,” said George Lyon, the lawyer who represented the Dallas Safari Club, “and that’s not how the administrative process is supposed to go.”

So far, the wildlife service said it had processed eight permits. In addition to the six it allowed, it denied two, and it is expected to rule in coming months on more. Mr. Lyon estimated that as of last September, close to 300 elephant trophy permits from various African countries were awaiting processing.

Mr. Easter says he’s not wasting any time to bask in his legal victory. His elephant’s tusks are already being prepared for shipment to his home in Texas.

“They are going to hang in the living room of my house, and I will remember that elephant for the rest of my life,” he said.

He has another trophy hunt in Africa booked for August.