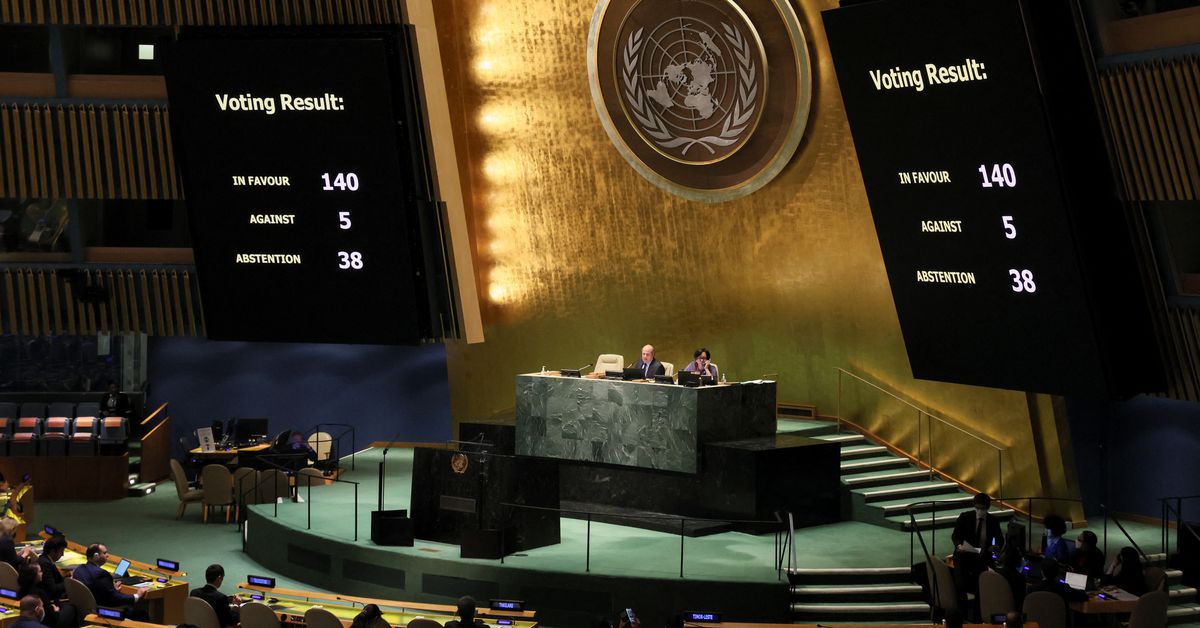 Voting results are seen on the screen during a special session of the U.N. General Assembly on Russia’s invasion of Ukraine, at the United Nations headquarters in New York City, New York, U.S., March 24, 2022. REUTERS/Brendan McDermid

UNITED NATIONS, March 24 (Reuters) – Almost three-quarters of the U.N. General Assembly demanded aid access and civilian protection in Ukraine on Thursday, and criticized Russia for creating a “dire” humanitarian situation after Moscow invaded its neighbor one month ago.

It is the second time the 193-member General Assembly has overwhelmingly isolated Russia over what Moscow calls a “special military operation” that is says aims to destroy Ukraine’s military infrastructure.

U.N. Secretary-General Antonio Guterres has blasted Russia’s “absurd war.” Thousands of people have been killed in Ukraine, millions made refugees, and cities pulverized in the past month. read more

The resolution adopted on Thursday, which was drafted by Ukraine and allies, received 140 votes in favor and five votes against – Russia, Syria, North Korean, Eritrea and Belarus – while 38 countries, including China, abstained.

General Assembly resolutions are nonbinding, but they carry political weight. There was a round of applause in the hall after the adoption on Thursday.

Russia’s U.N. Ambassador Vassily Nebenzia described the resolution adopted on Thursday as a “pseudo humanitarian draft” that took a “one-sided view of the situation.” He again accused Western countries of a campaign of “unprecedented pressure” to win votes, a claim that the United States has rejected.

Ukraine and its allies had been looking to match or improve on support received for a March 2 General Assembly resolution that deplored Russia’s “aggression” and demanded it withdraw its troops. That received 141 yes votes, the same five no votes, while 35 states – including China – abstained. read more

U.S. Ambassador to the United Nations Linda Thomas-Greenfield described the vote on Thursday as an “astounding success,” telling reporters: “There’s really no difference between 141 and 140.”

The resolution adopted on Thursday demands the protection of civilians, medical personnel, aid workers, journalists, hospitals and other civilian infrastructure. It also demands an end to the siege of cities, in particular Mariupol.

The resolution echoes the March 2 General Assembly text by again demanding that Moscow stop fighting and withdraw its troops from Ukraine.

South Africa had proposed a rival draft resolution that focused on the humanitarian situation and did not mention Russia. Russia appealed for countries to support that text.

The General Assembly decided not to act on the South African draft after Ukraine called a vote under a rule covering draft resolutions on the same issue.

The General Assembly vote came one day after a Russian-drafted resolution calling for aid access and civilian protection in Ukraine – and not mentioning Moscow’s role – failed at the U.N. Security Council, with only Russia and China voting yes and the remaining 13 members abstaining. read more

The Russian Security Council draft was very similar to the text put forward in the General Assembly by South Africa.