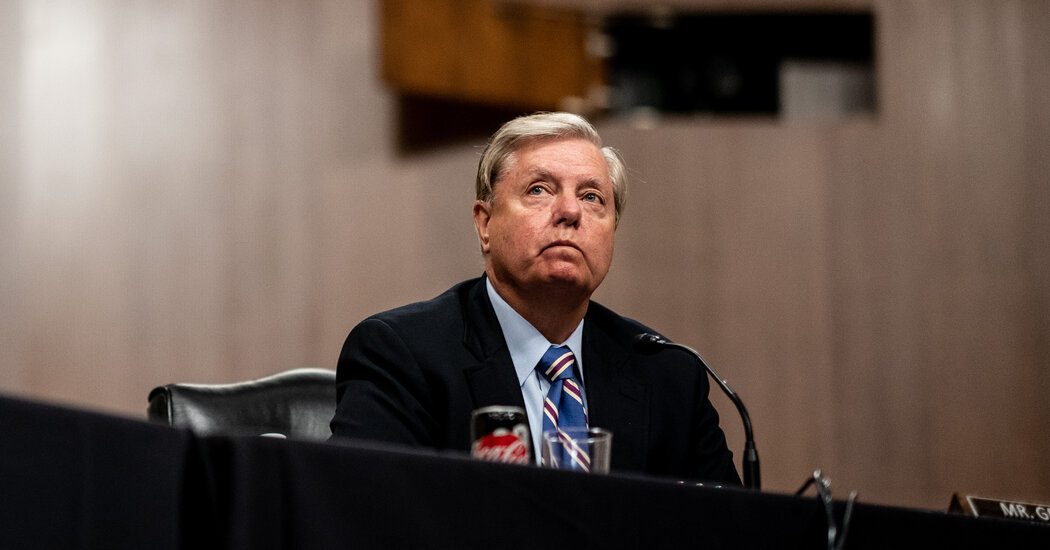 Tucker Carlson on Fox News, one of President Trump’s most devoted defenders, is pointing a finger at another Trump wingman — Senator Lindsey Graham of South Carolina — for selling the president on a sit-down with Bob Woodward for his new book.

It is not clear, however, if Mr. Carlson blames Mr. Graham for the 17 other times the president spoke to Mr. Woodward for the book, on the record.

“It was Lindsey Graham who helped convince Donald Trump to talk to Bob Woodward,” said Mr. Carlson, citing an anonymous source, during his show on Wednesday night. “Lindsey Graham brokered that meeting. Lindsey Graham even sat in on the first interview between Bob Woodward and the president. How did that turn out?”

He went on to ask, rhetorically, why Mr. Graham (“who is supposed to be a Republican”) walked the president, the senator’s golf partner, into a such a trap.

Mr. Carlson had a theory:

“Keep in mind that Lindsey Graham has opposed, passionately opposed, virtually every major policy initiative Mr. Trump articulated when he first ran — from ending illegal immigration, to pulling back from pointless wars, to maintaining law and order at home. Mr. Graham was against all of that.”

That is true enough; Mr. Graham was a scathing Trump critic before he rose to power.

But that case hit a fact-check wall, and fast: Mr. Trump told Mr. Carlson’s Fox colleague Sean Hannity on Wednesday night that the choice had been his own.

“He called. I didn’t participate in his last one — and he does hit jobs with everybody,” the president said, alluding to Mr. Woodward’s first biography of Mr. Trump, “Fear,” published in 2018.

“On Bush, I guess they did three books — they were all terrible,” the president continued. (Mr. Woodward actually wrote four about George W. Bush.) “So I figured: You know, let’s just give it a little shot — I’ll speak to him. It wasn’t a big deal. I speak to him, and let’s see. I don’t know if the book is good or bad — I have no idea. I probably, almost definitely, won’t read it because I don’t have time to read it.”

Mr. Trump’s explanation comports with his behavior, and his private comments to friends over the years. Mr. Woodward might have been a dangerous inquisitor, but he is also a branded celebrity icon in Washington journalism, and Mr. Trump — who is keenly conscious of his place in the pecking order — respected Mr. Woodward’s status, if not his work.

Susan Collins Hasn’t Changed Much, but Maine Has