Trying to Hammer Iran With U.N. Sanctions, U.S. Issues More of Its Own 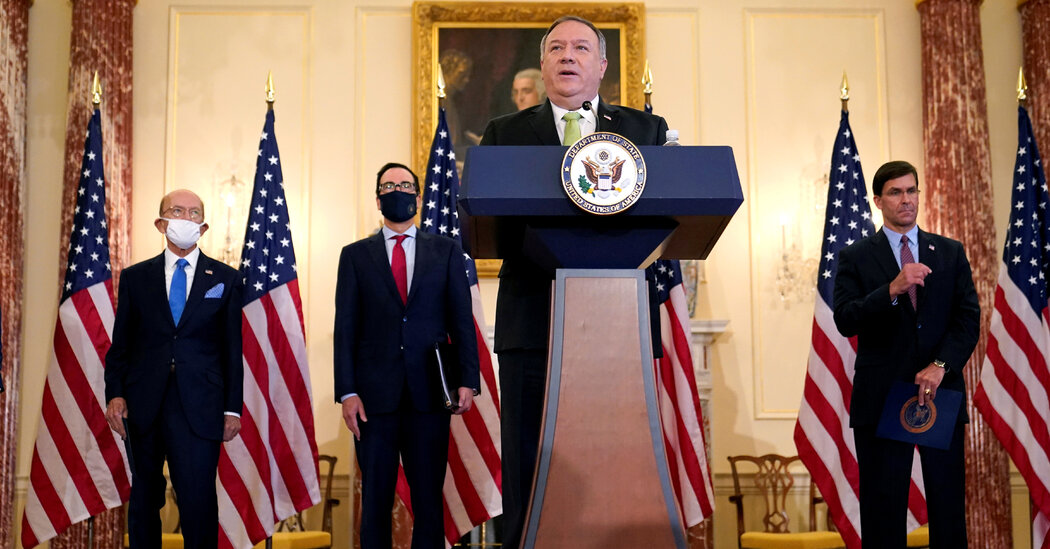 WASHINGTON — The United States issued new economic sanctions against Iran on Monday, inflicting more financial injury on Tehran and insult on American allies as the Trump administration accused other countries of appeasing Iran instead of fostering peace.

Four cabinet secretaries, the White House national security adviser and the American ambassador to the United Nations announced the additional penalties at the State Department, two days after the administration said it had unilaterally reimposed U.N. sanctions against Iran — a declaration European allies have balked at and the U.N. Security Council has refused to recognize.

American officials described the crackdown as complementary to the diplomatic normalization accords between Israel and the Arab states Bahrain and the United Arab Emirates, which were brokered with American help and serve, in part, to unite the Middle East against Iran.

“And today, I’m proud to announce how the Trump administration is taking even more action to further that same goal and protect the American people,” Mr. Pompeo said, referring to the sanctions.

Iran’s foreign minister, Mohammad Javad Zarif, dismissed the regional diplomatic deals as an election-year “show,” given that Israel has had lower-level relations with the Emirates and Bahrain for years.

“Let’s not put more meat into something that didn’t have much meat other than a photo,” Mr. Zarif said in a teleconference hosted by the Council on Foreign Relations.

The administration also again sought to pressure other nations to recognize the U.N. sanctions. Kelly Craft, the American ambassador to the United Nations, urged the world body to enforce them in a letter on Monday, though that position puts the Trump administration at odds not only with the Security Council but with Britain, France and Germany, which have refused to extend an arms embargo against Iran past its Oct. 18 expiration to preserve a 2015 nuclear deal between Tehran and world powers.

At the State Department, Ms. Craft struck a defiant tone.

“As we have in the past, we will stand alone to protect peace and security at all times,” she said. “We don’t need a cheering section to validate our moral compass.”

The top European Union diplomat, Josep Borrell, had earlier repeated his stance that the United States could not impose the international sanctions because it was no longer a party to the deal that had lifted them. “I call on all to do their utmost to preserve the agreement and to refrain from any action that could be perceived as an escalation in the current situation,” Mr. Borrell said in a statement on Sunday.

The dispute between the United States and Europe widens a diplomatic breach that began when the Trump administration withdrew from the nuclear deal in 2018, but it appears mostly symbolic: An E.U. arms embargo against Iran is not set to expire until 2023, meaning that any weapons trade with its nations would already be penalized. But American officials are warily watching Russia and China, both of which have expressed interest in arms trade with Iran once the embargo expires.

In targeting Mr. Maduro, the Trump administration also ratcheted up pressure against a leader whose ouster it has sought for nearly two years, after his disputed re-election in 2018, and on whom it had previously imposed sanctions. Last month, the United States seized fuel headed to Venezuela from Iran after the shipping company was warned it would be hit with severe penalties for allowing the transfer.

The Trump administration also said two of the Iranian officials who worked for Tehran’s Aerospace Industries Organization assisted with a space launch vehicle, with the help of missile specialists from North Korea. That is also a violation of sanctions imposed against North Korea.

During Monday’s teleconference, Mr. Zarif argued that it made little difference that Iran, in reaction to the American withdrawal from the nuclear deal, was enriching more uranium than allowed by the agreement. He acknowledged that by some measures, Iran had “enough for three bombs already.”

He also did not deny that Iranian hackers were attacking targets in the United States.

But Mr. Zarif argued that “it is the United States that had acknowledged engaging in cyberwarfare against Iran, even to the point of destroying very sensitive nuclear structures that could have ramifications with the death of hundreds of thousands of people.” He was apparently referring to the American attack on Iran’s Natanz nuclear enrichment plant more than a decade ago.

He said Iran had no interest in affecting the coming election. “For us, it doesn’t matter who goes to the White House,” Mr. Zarif said.