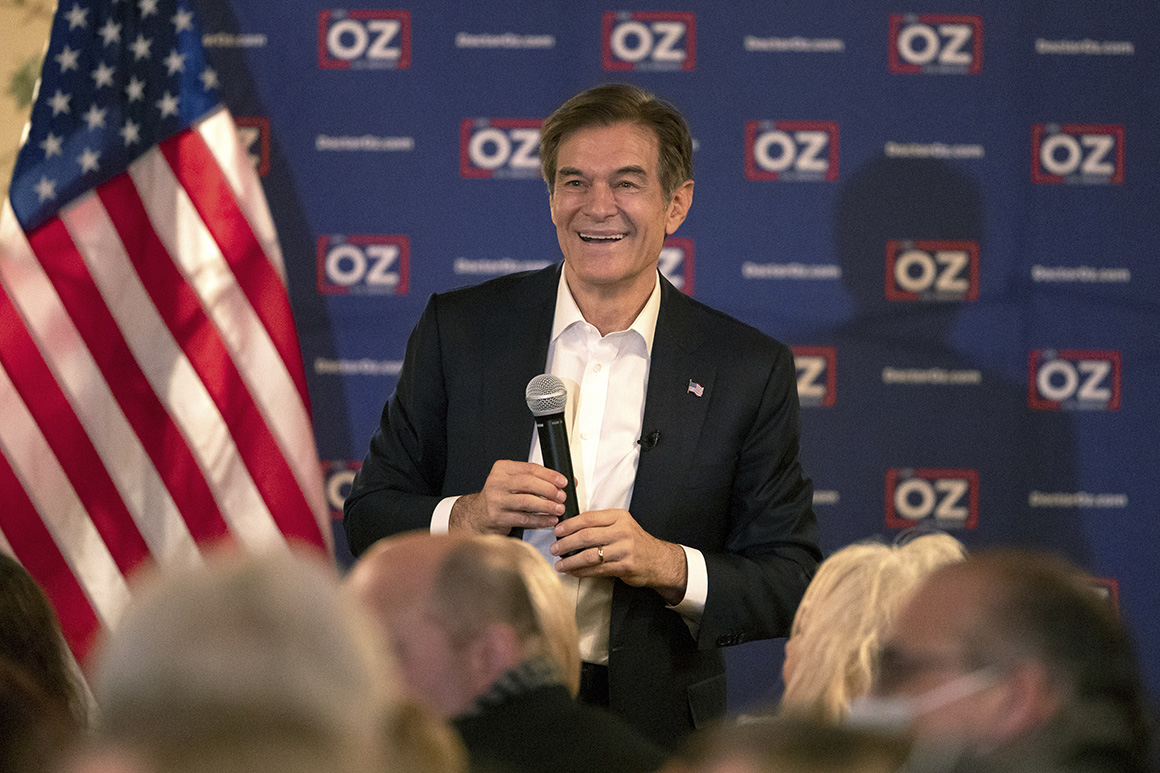 “You know I read a couple articles, I got a lot of reaction to this, 99 percent supportive, ‘MAGA is shocked,’” Hannity said. “When I supported Donald Trump pretty early I got the crap beaten out of me — Glenn Beck, Ben Shapiro … and I promised people he’d govern as a conservative and he did. And I’m saying the same thing about you [Oz].”

But the night after Hannity’s segment, his fellow Fox News host Laura Ingraham did one of her own, in which she played clips of Oz’s past positions on abortion and gun laws and pressed former Trump aide Kellyanne Conway — who supports businessman David McCormick, Oz’s main GOP rival, and is working with a McCormick-supporting super PAC — if Trump’s decision was wrong.

“Kellyanne, do you think the Trump endorsement of Oz was a mistake?” Ingraham said. “Hannity I think endorsed Oz, and I think that’s probably not inconsequential for President Trump. You wouldn’t answer the question of whether it was a mistake. I think it was a mistake for Trump to endorse Oz. I’ll say it, I’m not afraid to say it.”

The dueling Fox News segments illustrate the fissures that have erupted in MAGA world over Trump’s intervention in the Pennsylvania GOP primary. And it is the latest example of how the former president’s endorsements have often added more chaos to already contentious fights to define the Republican Party during his post-presidency.

“My phone has been ringing off the hook from committee chairs in Pennsylvania saying, ‘What the heck is going on? What was President Trump thinking?’” said Army veteran Sean Parnell, the candidate Trump originally endorsed in the race, who withdrew over allegations of abuse from his estranged wife. Parnell is supporting McCormick.

Trump’s decision to endorse Oz followed clamoring from many Republican operatives for him to choose a side in the contentious primary race. And it comes after the former president has faced public criticism among some on the right over his other endorsements; among them his support for former State Department spokesperson Morgan Ortagus, who is running for a House seat in Tennessee against another MAGA favorite Robby Starbuck, and his decision to back and unback Brooks.

According to people familiar with the matter, those most influential in the decision included Hannity; Trump’s wife, Melania Trump; and Palm Beach friends such as billionaire Steve Wynn. Trump was impressed by the crowds at Oz’s Senate campaign events, and he was aware that McCormick had made negative comments about Trump in the past on video, according to a person familiar with Trump’s thinking.

One person close to Trump shrugged off any notion that Trump is having buyer’s remorse or suffering any headaches over his endorsement of Oz. “The authentic outrage versus the paid outrage has been hard to discern,” the person said.

The Oz campaign, meanwhile, argued that the narrative about the backlash to Trump’s nod has been overblown, and driven by the McCormick team.

An Oz aide stressed that the event with Carson had been in the works for some time. But Oz has also rolled out endorsements from two GOP House members in Pennsylvania since Trump’s announcement: Reps. Fred Keller and Lloyd Smucker.

But even some of Oz’s supporters acknowledged concern that the fallout from the Trump nod could impact the party’s chances in the general election. The Pennsylvania Senate race is key to the GOP’s hopes of regaining control of the chamber, and victory in November will require Republicans all rowing in the same direction.

“Unless you’re really wanting to damage us in the general, I don’t know why you’re continuing this,” said Gloria “Lee” Snover, chair of the Northampton Republican Party and an Oz backer, of complaints about Trump’s decision. “That’s why I’m upset with these people that won’t get over the endorsement. Okay, it happened. It’s done. You’re going to continue to trash the Republican Party? Please stop.”

Snover was thrilled with Trump’s endorsement, and she said she had lobbied for it after undergoing her own transformation from Oz skeptic to Oz fan. She sees a parallel between Oz and Trump.

“I went back today and was watching some old videos of Trump when he said he was pro-choice before he ran. And he ended up being the most pro-life president we’ve ever had in our history of the Republican Party,” she said. “So these people who are trashing Oz, they did this to Trump when they ran. … They’re saying, ‘Oh, he’s pro-choice and he’s a liberal and he’s a RINO and he’s for Democrats.’ They said all that about Trump.”

Oz’s allies believe that Trump’s endorsement will have a major impact on Republican primary voters who remain uncertain about who to support in the race. A poll released by Eagle Consulting Group, which was in the field until the Saturday afternoon ahead of Trump’s endorsement, showed 45 percent of likely Pennsylvania GOP primary voters remaining undecided, with 18 percent supporting McCormick and 11 percent supporting Oz.

Jim Schultz, a former White House lawyer who is close to the McCormick campaign, said McCormick is continuing his campaign as planned.

A spokesperson for McCormick pointed to recent interviews in which McCormick praised Trump and painted himself — not Oz — as the real conservative in the race.

“I respect the president and he’s incredibly popular in PA, as you know Will, and has a huge following among conservatives, and Mehmet Oz doesn’t. If you look at the polling, he is not viewed as the conservative and for good reason,” said McCormick on “The Rich Zeoli Show.” “I think President Trump’s endorsement certainly is a big deal but the really big deal is that Mehmet Oz isn’t a conservative and not an America First conservative.”

So far, Trump has not announced a rally in Pennsylvania ahead of the May 17 primary, although Trump has been holding multiple rallies per month and a Pennsylvania event is not out of the question. A spokesperson for Trump declined to comment on the record for this story, and pointed to Trump’s statement announcing his endorsement of Oz.

Oz and McCormick have each poured millions of dollars into the primary, making the Pennsylvania race one of the most expensive in the country. And in a sign that the McCormick team is undeterred by Trump’s endorsement of Oz, it told Axios on Wednesday that the campaign raised more than $4.3 million in its first three months.