Trump’s Latest Conspiracy Theory: Thugs on a Plane Dressed All in Black 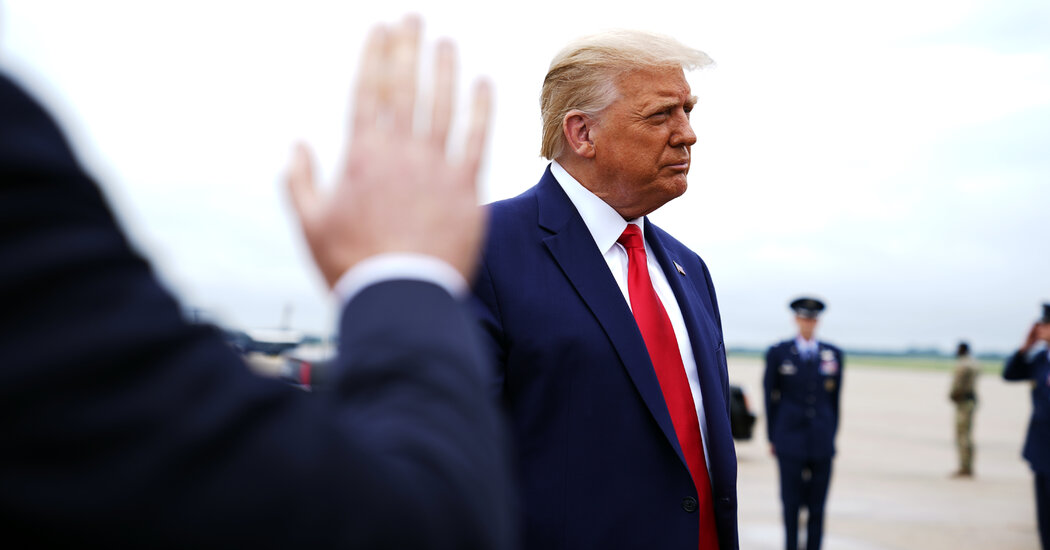 WASHINGTON — Even Laura Ingraham thought it sounded a little wild. There was the president of the United States on her Fox News talk show that aired Monday night describing mysterious people in “dark shadows” secretly pulling the strings of his Democratic challenger amid the street protests against racial injustice.

“People that you’ve never heard of” are controlling former Vice President Joseph R. Biden Jr., President Trump told her. “People that are in the dark shadows.”

“What does that mean?” Ms. Ingraham asked. “That sounds like conspiracy theory.”

“Where was this?” Ms. Ingraham asked.

“I’ll tell you sometime, but it’s under investigation right now, but they came from a certain city, and this person was coming to the Republican National Convention, and there were like seven people on the plane like this person, and then a lot of people were on the plane to do big damage.”

The president’s cryptic comments quickly drew attention on social media as people have tried to figure out what he was talking about.

Asked about his comments before boarding Air Force One bound for Kenosha, Wis., on Tuesday morning, Mr. Trump was hardly any clearer about where he was getting his information.

“I could tell you that I can probably refer you to the person and they could do it,” he told reporters. “I would like to ask that person if it was OK. The person on the plane said there were about six people like that person or more or less and what happened is the entire plane filled up with the looters, the anarchists, rioters, people looking for trouble. The person felt very uncomfortable on the plane. It is a person you know. I’ll see whether or not I can get that person to speak to you.”

The White House later released a statement pointing to a new federal investigation of the financing of rioters, an inquiry confirmed on Monday night by Chad F. Wolf, the acting secretary of homeland security.

“The President is referring to questions that need answers such as who may be funding travel and lodging for organized rioters,” Sarah Matthews, a White House spokeswoman, said in the statement. “In Kenosha, violent rioters who were arrested hailed from 44 different cities. An investigation is underway to determine who is funding these organized riots happening across the country.”

Mr. Trump has long embraced conspiracy theories, the more far-fetched the better (see “Obama birthers”), but in recent days he has increasingly trafficked in dark ideas and stories from the world of QAnon and other fringe elements.

At various points lately, Mr. Trump has promoted a supposed medical expert who blames various ailments on demon sperm and says treatments are being developed from alien DNA. He has also endorsed a congressional candidate who subscribes to QAnon theories of a world controlled by a “global cabal of Satan-worshiping pedophiles.”

Over the weekend, Mr. Trump reposted Twitter messages asserting that the death toll from the coronavirus pandemic had been wildly overstated and that the street protests of police brutality were actually a secretly organized “coup attempt” by “a well funded network of anarchists trying to take down the President.” One of the coronavirus tweets he circulated was subsequently deleted by Twitter because it was false and misleading.

The White House on Tuesday offered no explanation of Mr. Trump’s comments to Ms. Ingraham, but NBC News reported that the description of a planeload of black-clad thugs matches a viral Facebook post from June 1 that made a similar assertion. “At least a dozen males got off the plane in Boise from Seattle, dressed head to toe in black,” the Facebook posting said, warning of possible attacks downtown and claiming that one passenger had “a tattoo that said Antifa America on his arm.”

Antifa, short for anti-fascist, is a loosely affiliated group of far-left activists that has participated in street demonstrations in the months since the killing in May of George Floyd, a Black man who died in custody after a white police officer in Minneapolis pressed his knee on his neck. Mr. Trump has sought to highlight and magnify Antifa’s role in the protests, calling for it to be designated a terrorist group, although the United States has no domestic terrorism law allowing for that.

Mr. Trump’s portrayal of menacing thugs on a plane headed to disrupt the Republican National Convention comes as he seeks to make law and order a central theme of his campaign against former Vice President Joseph R. Biden Jr., his Democratic challenger. New polling by Morning Consult shows Mr. Biden with substantial leads in many battleground states following the two party conventions.

The president is heading on Tuesday to Kenosha, the scene of unrest after police shot Jacob Blake, a Black man, seven times in the back, leaving him paralyzed. Mr. Trump has no plans to meet with Mr. Blake’s family, saying he tried to call but decided not to speak with the relatives when they asked for a lawyer to be on the line.

Instead, he will tour areas damaged by street violence and then meet with law enforcement officers and others at a local high school. The city’s mayor and Wisconsin’s governor, both Democrats, asked Mr. Trump not to come for fear that he would inflame the situation rather than calm it down.

During his interview with Ms. Ingraham, the president defended police officers who have been accused of using excessive force, particularly against Black men. Mr. Trump compared such shootings to missing a putt on a golf course.

“The police are under siege because of things — they can do 10,000 great acts, which is what they do, and one bad apple — or a choker — you know, a choker. They choke. Shooting the guy,” he said.

Mr. Trump continued: “Shooting the guy in the back many times. I mean, couldn’t you have done something different? Couldn’t you have wrestled him? You know, I mean, in the meantime, he might have been going for a weapon, and, you know, there’s a whole big thing there, but they choke. Just like in a golf tournament, they miss a three-foot putt.”

Ms. Ingraham tried to save him from himself. “You’re not comparing to golf because, of course, that’s what the media would say,” she said.