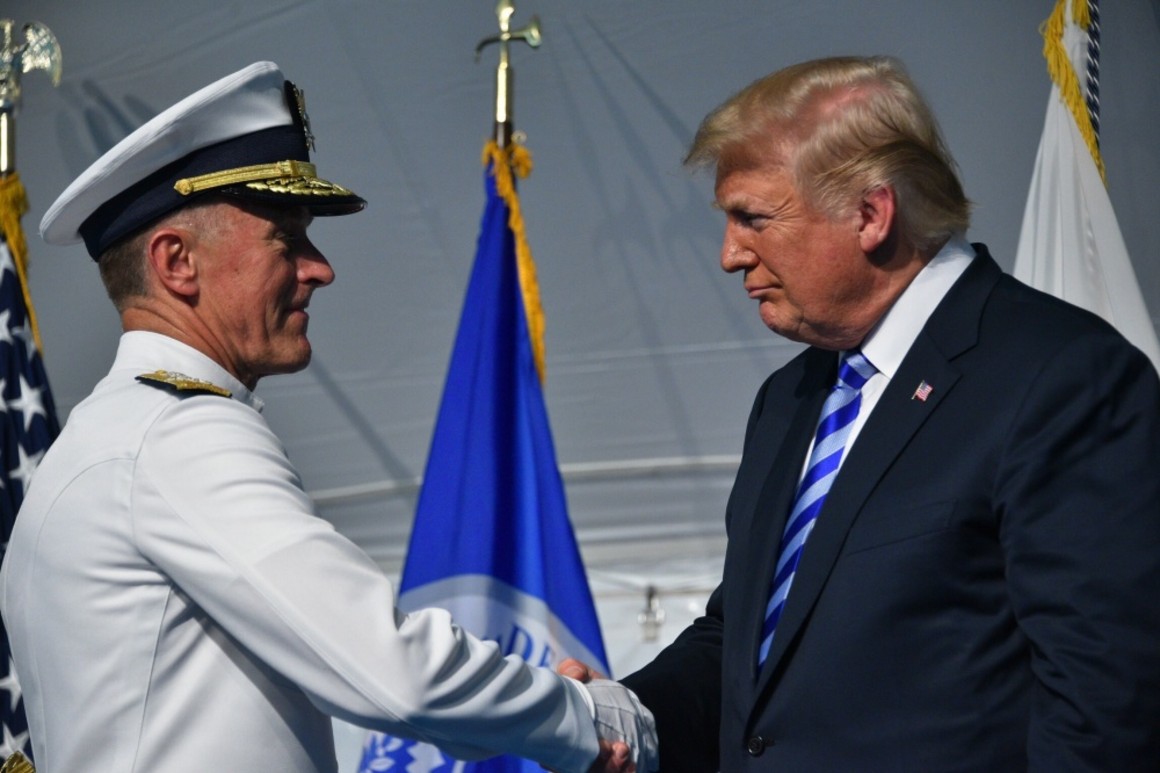 Zukunft’s comments come a day after Trump sidestepped a question about whether he would commit to a peaceful transfer of power if he loses the November election. His press secretary later said the president would “accept the results of a free and fair election.” The president has also repeatedly questioned the legitimacy of mail-in voting, and even urged Americans to vote twice, which is illegal.

In addition to his concern over the Constitution, Zukunft said he was driven to endorse Biden by the 2019 government shutdown over funding for Trump’s border wall, which left the Coast Guard’s active-duty force of more than 40,000 working without pay for several months. He is also concerned by Trump’s dismissal of science, both on climate change and the Covid-19 pandemic, which Zukunft says has caused “irrevocable” damage to the environment.

Zukunft joined recently retired Air Force Gen. Paul Selva, who was the second-highest ranking officer in the military as vice chairman of the Joint Chiefs of Staff until August 2019, in signing the letter.

The retired four-star officers are two of nearly 200 other retired generals and admirals who threw their support behind the former vice president. The group, which calls itself the National Security Leaders for Biden, also includes former defense secretaries, ambassadors, and a number of high-profile Republicans.

“We love our country. Unfortunately, we also fear for it,” the open letter said. “The COVID-19 pandemic has proven America needs principled, wise, and responsible leadership. America needs a president who understands, as President Harry S. Truman said, that ‘the buck stops here.’”

Other signatories included two Obama defense secretaries, Ash Carter and Chuck Hagel, as well as Eric Edelman, who served as undersecretary of defense for policy in the George W. Bush administration.

“Our military men and women, our veterans love this president for a very distinct reason. Under Obama-Biden, sequestration really gutted our military. You had the Navy at its smallest point ever, and the other military branches were absolutely gutted,” she said. “Then you had President Trump who came in and secured a record amount of funding for our military and our Department of Defense and built up our military.”

“I can’t speak to one person’s reasoning,” she said when asked about Selva’s involvement. “But this president, when you look at what he’s done — bringing our troops home and all he’s done in aggregate — the rank and file in this military love this president.”

It is rare for recently-retired high-ranking military officers to publicly endorse a political candidate or criticize a commander in chief they served. While former top military leaders have endorsed Biden and blasted Trump, Selva is the highest-ranking Trump-era leader to do so. Trump’s predecessor, Barack Obama, selected both Selva and Zukunft for the jobs, but they served well into the Trump administration.

In the interview, Zukunft described a chaotic administration often thrown off balance by an unpredictable leader. He recalled when Trump announced in a series of tweets in July 2017 that transgender people would no longer be allowed to serve in the military. Zukunft said he called his then-boss, Homeland Security Secretary John Kelly, who would go on to serve as White House chief of staff. Kelly, also caught off guard, worried about breaking faith with the service members who had recently come out as transgender, he said.

“How do you respond to a tweet?” Zukunft said. “The whole decision-making process, it would be a tweet, what’s the public reaction, and then things would move along in that direction. At no point was there even any sit-down discussion or deliberation or ‘we’re thinking about repealing this and gaining your insights.'”

Zukunft interacted with Trump on multiple occasions throughout the first two years of his administration, including quarterly meetings at the Pentagon or the White House, and he quickly learned how to get the president’s attention. During a briefing in Key West, Fla., Zukunft recalled watching Trump grow increasingly bored as a Navy admiral and an Air Force general discussed strengthening partnerships.

When it was his turn to brief, Zukunft told the president what he believed he wanted to hear: “‘Mr. President, you are the first commander in chief to get off their ass and see what the hell is going on down here.”

“Now I don’t talk like that normally,” Zukunft told POLITICO. “But as soon as I did, the president was intently hanging on every word I had to say.” Trump agreed to provide the Coast Guard the additional ships Zukunft said were needed to police the region.

Later, when Trump spoke at the commencement ceremony at the Coast Guard Academy in New London, Conn., Zukunft urged the speechwriter to add a line about building additional icebreakers. When the president read the line from the teleprompter, the crowd went wild, he said.

“It garnered the attention he was looking for, in a very blue state, by the way,” Zukunft said.

In light of recent reports that the president disparaged troops wounded or killed in combat, Zukunft stressed that he never heard Trump say anything of the sort. He said he was grateful that Trump presided over his change-of-command ceremony after 41 years of service, the only time a president has done that for a Coast Guard commandant, he said.

However, Trump’s policies have hurt America’s standing in the world, Zukunft said, citing the president’s decision to pull out of the Paris Climate Accord without an alternative solution.

“Our global reputation suffered at the hands of this administration,” he said.

By contrast, Biden is a measured leader and surrounds himself with advisers with contrasting viewpoints, he said.

“He has great diplomatic skills. I think he would be a great executive envoy to re-instill trust in the U.S. brand among our allies,” Zukunft said.

In the Thursday letter, the signatories similarly contrasted Biden with Trump, who they said has demonstrated he is “not equal to the enormous responsibilities of his office.”

“Thanks to his disdainful attitude and his failures, our allies no longer trust or respect us, and our enemies no longer fear us,” they wrote, citing failures on climate change and North Korea’s nuclear program. They also slammed Trump for ceding influence to Russia and starting a trade war with China that has hurt American workers.

Zukunft also said he was dismayed at how Trump’s presidency has divided Americans, noting that as a “career public servant” he “took the highest oath to support and defend the Constitution of the United States.”

“I should be able to sit down over a cup of coffee with a Democrat and a Republican and have a healthy conversation, but instead it’s almost as though it’s the Hatfields and the McCoys,” Zukunft said.