Trump team plots how to bust Biden in the debates – POLITICO 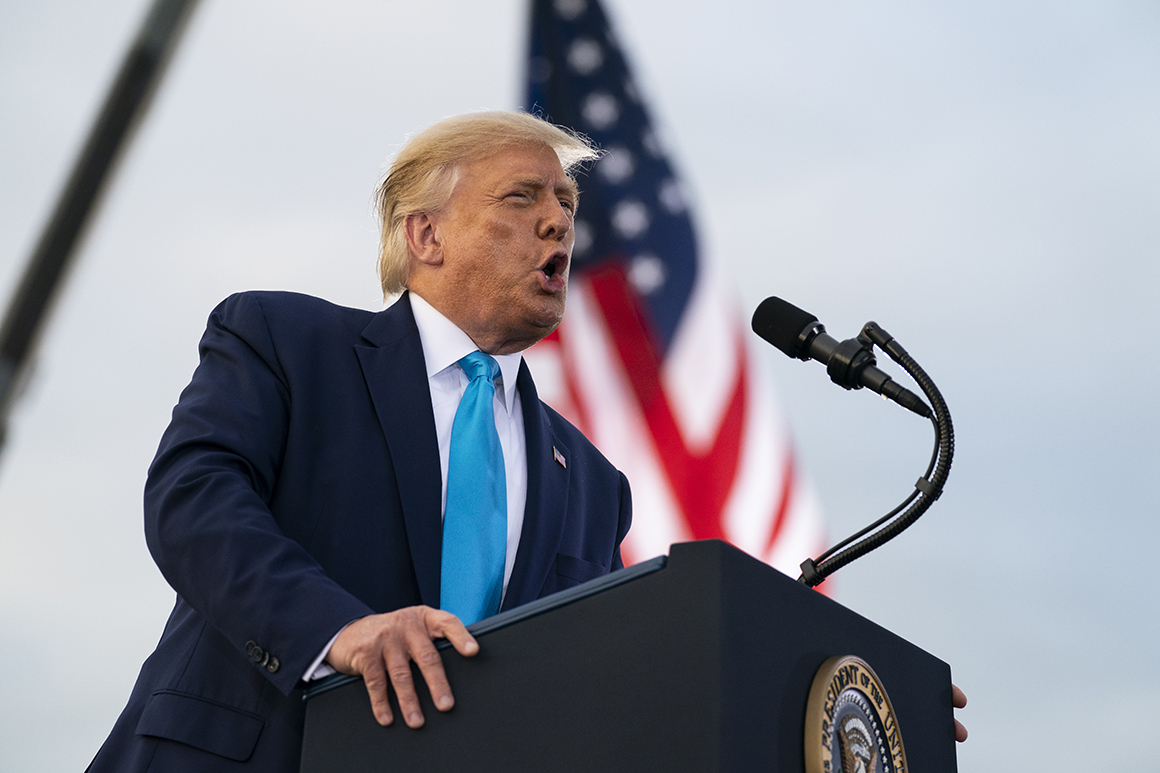 Now the Trump campaign and top advisers want to avoid the same misstep this fall when the president first faces off against former Vice President Joe Biden on Sept. 29.

The Trump team has been studying Biden’s idiosyncrasies in debates and other venues and preparing tactics for Trump, according to interviews with a dozen campaign aides, White House officials and outside advisers. Some have noticed the way he says, “C’mon, man,” whenever he feels frustrated, and they’re trying to identify words or phrases that trigger him to “reboot,” as one person familiar with the planning described it. Essentially, Trump aides are looking for ways to trip up Biden in an effort to spur an incoherent or unsatisfactory response — bolstering a key Trump argument against Biden built around his age.

Biden “did a very effective job at debating the wunderkind that was Paul Ryan in 2012, so I take his knowledge and skills seriously,” said one outside adviser to the Trump campaign. “That said, I do think he’s lost a step in the years since then.”

Other aides say they have been watching Biden’s past debate performances for other clues, such as when he is uncomfortable with a question.

“Biden has certain tells when he is not telling the truth, and those are things I have picked up in my review of his debates over the years,” said Jason Miller, a senior adviser to the campaign and one of the key advisers for Trump on the debates. “Biden has been debating for a half-century. He is very good. Part of the reason he is very good is that he gives the same answers over and over again to questions for the last 30 years. But he does have certain tells that he uses when he is not confident in his answer or trying to change the subject or make viewers forget what the actual question is.”

Very quietly, top Trump aides and advisers began to discuss debate prep in early August at the president’s golf resort in Bedminster, N.J. The prep work is expected to ramp up considerably now that the Republican National Convention has concluded.

Polls show the presidential race tightening, particularly in battleground states like North Carolina, Michigan and Wisconsin. The debate offers an opportunity for Trump to show off the power of incumbency, speak about his second-term agenda or simply draw a leadership or policy contrast with Biden.

But Biden is a much different politician from Clinton, and preparing to debate him involves its own set of challenges, especially since Trump must prepare and serve as president at the same time. Biden also does not carry the same political baggage or raw hatred from conservatives that the Clintons did, and he speaks in a more folksy and conversational manner compared with other politicians.

Christie, Miller and Trump campaign manager Bill Stepien are leading the debate prep. White House chief of staff Mark Meadows has been present for discussions and strategy sessions, but he isn’t deeply engaged; Christie has done this with Trump before and the president trusts his feedback and direction more than others, including his chief of staff. Jared Kushner also can attend any sessions he wants and involve himself as much as he wishes.

“The president is good at learning things through observation, so he’s been watching staff run through questions with Chris Christie and then he’ll develop his own style from there,” said a Republican close to Trump.

Facebook will ban political ads the week before the November election. POLITICO’s Steven Overly breaks down how the effort aims to prevent the spread of misinformation — and looks at whether big tech can handle the election.

Among the challenges for Trump is giving himself enough time and space to adequately prepare, especially when the president has never been a big fan of fat briefing books and prefers to make decisions on instinct.

“Debates are all about practice, practice, practice, and Trump does not like to do that,” said Ed Rollins, chair of the pro-Trump Great America PAC. “He needs to spend a lot of time and resources to get this ready. It is a 90-minute debate, and you probably have 30 minutes of you talking. You need to have something precise to say.”

The Trump team has been trying to do many of the sessions outside the White House and views Bedminster as a relaxing place freer of distractions than the West Wing or residence, but doing the prep work off-site will become more challenging this September as Trump starts to travel more frequently to battleground states.

So far, the team has done at least three strategy meetings and prep sessions and has tried to do one every 10 days — with at least one happening at the White House. So far, no one is playing the role of Biden. Instead, aides are talking though possible questions with Trump and playing devil’s advocate as he offers his response.

Aides have closely watched Biden’s debate against Paul Ryan in 2012 and the campaign speeches he gave when he was stumping for Hillary in 2016 for clues about his tics.

There’s some tension among the president’s advisers over whether it’s wise to try to trip up Biden so he stutters, or to box him in on issues.

One 2016 Trump campaign official said it’s a “calculated risk” to phrase things in such a way that might cause the former vice president to stammer in his response, acknowledging such a strategy could backfire if Trump deliberately appears to be messing with Biden’s history of stuttering — an attribute Biden has used to demonstrate his ability to overcome challenges and his empathy for children in similar situations. One aide said Biden is a good debater and unlikely to have difficulty speaking in that environment.

“Joe Biden has had mixed results of speaking off the cuff in the last few months, but he has been elevated by such low expectations,” said longtime Republican pollster Frank Luntz. “I don’t understand why the Trump people and Trump himself make fun of Biden’s inability to complete a sentence. That makes it easier for him to claim victory.”

One outside adviser to the president’s 2020 campaign said the goal is to equip Trump with ways in which he can box in Biden on policy matters by forcing him to either disavow his party’s most controversial positions on immigration, taxes, abortion or the “Green New Deal,” a move that would enrage his progressive base, or alternatively, force him to embrace positions that alienate moderate voters and would fit into the Trump campaign’s “radical leftist” narrative about him. Trump will also go after Biden’s 47-year record in Washington in the Senate and as vice president.

Democrats fear that Trump’s biggest strength heading into the debate is his willingness to say whatever he wants at any time — and the potential inability for any debate moderator to keep up.

“His biggest advantage in the debate is his biggest advantage day to day. His lying floods the zone, and it floods the zone in the way that is unimaginable,” said Philippe Reines, a longtime top aide to Hillary Clinton who played Trump in her 2016 debate prep and watched hours of Trump tape in preparation. “He’s difficult to debate because of the unpredictably and no focus.”

The Trump team is urging people not to discount Biden and has promised the president will be prepared.

“Anyone who watches can see that there are times when Joe Biden can turn it on,” said Tim Murtaugh, the Trump campaign’s communications director. “He made it pretty well through 11 Democratic primary debates, and he has been a Washington politician for 47 years. He knows how to do this.”