Trump Takes Night Off From Anti-Immigrant Talk to Swear In U.S. Citizens 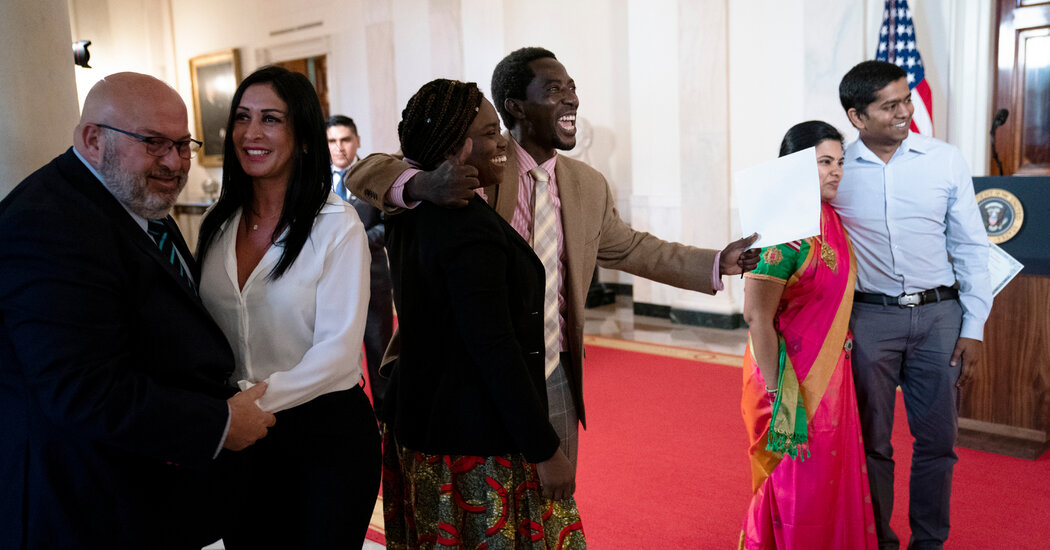 WASHINGTON — President Trump moved within weeks of taking office to prohibit immigrants from Sudan from entering the United States, citing terrorism threats and including it in his travel ban on some predominantly Muslim countries — restrictions that remain partly in place today.

But on Tuesday, when Mr. Trump wanted to portray himself as pro-immigrant, he invited Neimat Abdelazim Awadelseid, a Sudanese woman who had just qualified to become a U.S. citizen, and four others to a White House naturalization ceremony that his re-election campaign featured prominently during the Republican National Convention.

The president’s willingness to use the trappings of presidential power during a campaign convention was a striking departure from previous presidents, who avoided so blatantly blurring the lines between official actions and political activity. And Mr. Trump’s declaration that “we welcome five absolutely incredible new members into our great American family” stands in stark contrast to his anti-immigrant policies, often fueled by xenophobic language.

His decision to preside over the naturalization ceremony appeared aimed at suburbanites, people of color and women put off by his usually strident talk.

Ms. Awadelseid, 66, a substitute teacher who works with Sudanese children in her suburban Virginia community, said in an interview that “it is hard for my country” to be subject to travel restrictions but that it was an honor to visit the White House.

“It is a special moment, to get it from a president of the United States, to give me the citizenship,” she said. Ms. Awadelseid, who received a master’s degree and a doctorate from the University of Wyoming, has lived full time in the United States since 2000. She said she did not like to talk about politics and did not say whether she was surprised that her ceremony was broadcast during the convention.

But others, including Sudha Sundari Narayanan, 35, who was also among the five people sworn in at the White House, said they had not been told.

“I was surprised and shocked and excited,” said Ms. Narayanan, who immigrated to the United States in 2007 from India.

Ms. Narayanan, who said she did not have an opinion about Mr. Trump’s immigration policies, said she found out that the ceremony aired during the convention only when an excited friend called her later that night and told her she was on television.

“I never dreamed that something like this would happen,” Ms. Narayanan said. “I’m just a very simple girl trying to get my family running.”

Salih Abdul Samad, a Ghanaian chef, also did not know that the event would be broadcast during the convention. By Wednesday morning, he had received messages from friends around the world about his new fame.

“When you call me, you have to go through security background checks because I’m a star,” joked Mr. Abdul Samad, 44. He added that he was thankful for the United States, particularly the Affordable Care Act, which he said saved his life when his kidneys failed six years ago.

“I’m so ever grateful to this country for what they’ve given me,” Mr. Abdul Samad said.

The decision by Mr. Trump’s campaign to feature the naturalization ceremony angered some senior officials with U.S. Citizenship and Immigration Services, which oversees the naturalization process. Several expressed frustration with what they described as a politicized event.

Some asylum officers confronted senior agency officials during a virtual town hall on Wednesday about whether Chad F. Wolf, the acting secretary of the Department of Homeland Security, had violated rules prohibiting political activity by presiding over the ceremony.

“It’s one of the things that shouldn’t be politicized, and you can hardly get more political than your partisan political convention,” said Barbara Strack, a former chief of the refugee affairs division at Citizenship and Immigration Services during the Bush and Obama administrations.

White House officials said Wednesday that the ceremony, which featured Mr. Trump arriving to “Hail to the Chief,” was an official government event because it was taped Tuesday afternoon and publicly made available on the White House website. A White House spokeswoman said the president’s re-election campaign had simply decided to use it once it was on the website.

Planning for the event began early last week when White House officials reached out to the Washington office of the citizenship and immigration agency with a request to organize a naturalization ceremony at the White House, according to a senior administration official. Naturalization ceremonies have been held at the White House under previous presidents and Mr. Trump himself, but this appears to be the first time one has been broadcast during a political convention.

As the weekend approached, the White House officials requested information about the potential candidates for the ceremony and suggested the agency find immigrants from Mexico — something of a turnaround from Mr. Trump’s usual messaging on Mexico. When he announced his candidacy in 2015, he warned of Mexican “rapists” coming to the United States, and he has spent nearly four years trying to build a wall on the U.S.-Mexico border. But Mr. Trump has been more complimentary this year after Mexico directed security forces to halt migration from Central America.

As it happened, no one from Mexico was at the ceremony.

Ms. Narayanan, from India, had traveled to the United States with her husband, who came on a student visa. Ms. Narayanan accompanied him on an F2 visa that allows spouses and dependents of foreign students at American schools to temporarily stay in the United States. In July, the Trump administration proposed stripping international students of their visas if they exclusively took online courses during the coronavirus pandemic, but after an outcry from colleges and universities, the rule was rescinded.

Ms. Narayanan, who has two children born in the United States, obtained lawful permanent residency in 2013. She said she took her citizenship test and had her required interview just a week before she received a call about the ceremony at the White House.

“It was very warm and welcoming,” Ms. Narayanan said of the event with the president. “I told him it was such an honor to meet him.”

Ms. Awadelseid, from Sudan, studied at the University of Wyoming twice, first to get her master’s in the early 1980s and then her doctorate in 1994. She said both degrees were in animal nutrition. She arrived in the United States permanently in 2000, and eventually got a green card through sponsorship by her brother, who had already become a citizen.

“The situation in Sudan was really not good politically and economically and everything,” she said. “When we found the chance to be a permanent resident here in the U.S.A., we stayed.”

She said she planned to quickly register to vote in the 2020 election.

“I’m excited about that,” she said.

The other attendees included Rima Gedeon, 46, from Lebanon, who works at a preschool in Virginia, and Robert Alcocer, 32, from Bolivia, who works at a construction company.

The Trump administration also moved late last month to raise the cost of naturalization applications by more than 80 percent and to substantially tighten eligibility requirements for a subsidized application.

Of all the contradictions about a White House naturalization ceremony during the Republican National Convention, the starkest may be that Mr. Trump himself started an initiative seeking to potentially strip the citizenship status of thousands of people — a departure from the past several decades of practice and Supreme Court precedent.

Mr. Trump’s Justice Department announced in 2018 a goal of filing 1,600 denaturalization cases, a major acceleration of the previous use of denaturalization. Fewer than 150 people had been denaturalized in American courts in the previous 50 years, almost all of them Nazis, war criminals or people who were convicted of federal crimes tied to large-scale immigration fraud.

The president has largely blocked asylum seekers and refugees fleeing persecution, war and violence. He has built nearly 300 miles of border wall (though without persuading Mexico to pay for it, as he once insisted). He has made it harder for poor people to immigrate to the United States, imposed travel bans on some predominantly Muslim countries and separated migrant children from their parents at the border.

At times, he has used racist messaging, condemning “shithole countries” and complaining that people from Haiti “have AIDS.”

Mr. Abdul Samad said Wednesday that he found the president’s comments about African nations “very painful,” but he was “very, very honored and grateful” to Mr. Trump for inviting him to the White House.

At the ceremony, Mr. Trump listened to the five immigrants take the oath of citizenship, then he approached the lectern to briefly share each of their stories.

Last week, during a briefing from border officials in Yuma, Ariz., the president had similar praise for a very different achievement.

Bombing at California Church Known for Its Anti-L.G.B.T.Q. Views

The Trump Presidency Is Now History. So How Will It Rank?