Trump shifts into listening mode, if only briefly. 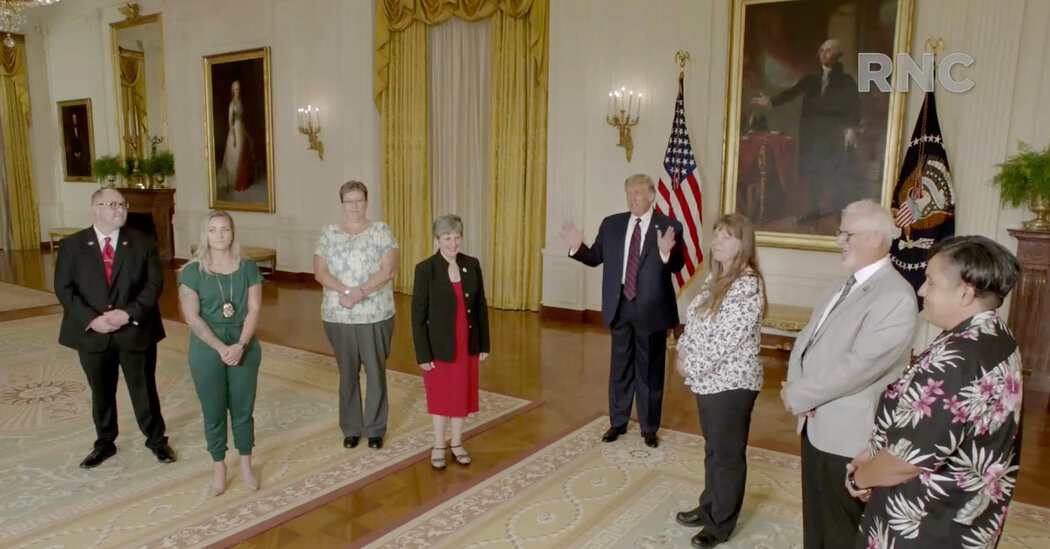 President Trump was trying to rewrite history and enlist frontline health workers to the cause. The strain showed.

Flanked in the East Room of the White House by Americans involved in the fight against the coronavirus — a nurse, a trucker, a postal worker, another nurse — Mr. Trump set off on Monday for more than four rose-colored minutes recasting the recent past before his Night 1 convention audience.

“Tell me a little about your stories,” he asked his guests at first. But he had a few of his own: about dastardly Democrats and governors who disappointed him, about his preferred nicknames for the virus and the insufficient gratitude for his government’s efforts.

“We have delivered billions of dollars of equipment that governors were supposed to give, and in many cases they didn’t get,” he complained. “So the federal government had to help them, and all of the people that did this incredible work, they never got credit for it. But you understand where it came from.”

“I don’t want to go through all the names,” he said at one point, “because some people may get insulted. But that’s the way it is.”

And this is the way it was, as ever, on Monday night: a re-election team that had pledged a message of uplift and unity beforehand — with its candidate struggling in the polls amid poor appraisals of his pandemic response — and a principal who knows no other way but rampaging and revisionism.

All night, the proceedings played out in this perpetual tug. Any aspirational appeals from speakers like Nikki Haley, the former United Nations ambassador, and Senator Tim Scott of South Carolina, the chamber’s only Black Republican, seemed doomed to be shadowed by the often ominous tone of the evening.