Trump says he is ‘the only thing standing between the American dream and total anarchy.’ 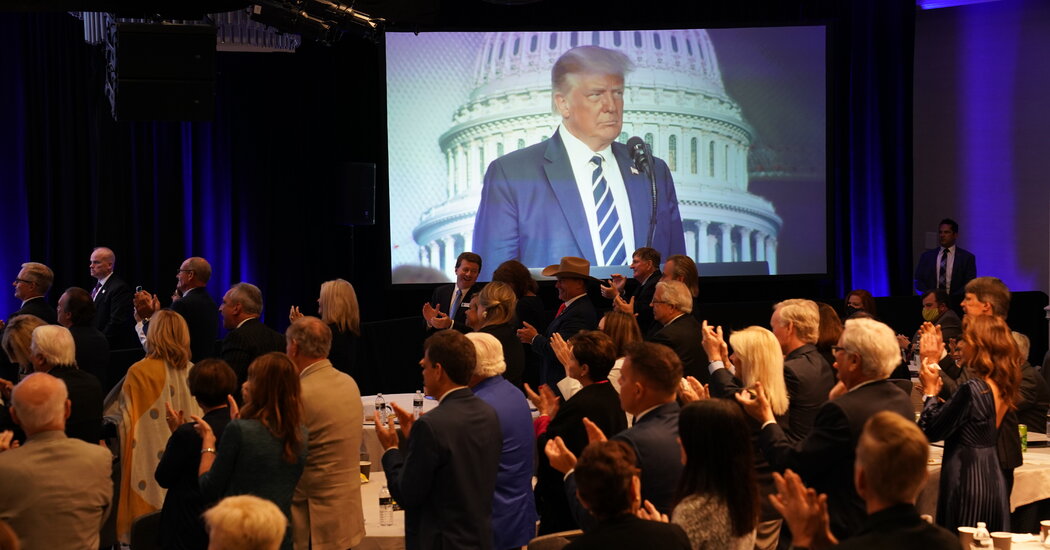 President Trump, who decried what he called “American carnage” during his inaugural address in 2017, on Friday called the Democratic convention the “darkest and angriest and gloomiest” in the country’s history in remarks to a conservative group in Arlington, Va.

He also delivered another intense assault against universal mail-in voting, predicting that it would lead to the “greatest catastrophe” ever in which the results of the election will not be known for weeks or months because of fraudulent and chaotic voting.

The president then described what he called “a theory,” that if the results are not known by the end of the year, House Speaker Nancy Pelosi, a Democrat from California, could automatically become president. He appeared to be referring to Section One of the Constitution, which says the House of Representatives picks a president if electors do not vote by the inauguration.

“Crazy Nancy Pelosi would become president, you know that,” Mr. Trump told members of the Council for National Policy. “No. No. I don’t know if it’s a theory or a fact, but I said, ‘That’s not good. That’s not good.’ ”

In Mr. Trump’s hour-long remarks, delivered a day after Mr. Biden formally accepted the Democratic nomination Thursday evening, he painted a picture of death, destruction and economic ruin if voters choose the Democrat in November.

“Joe Biden declared a season of American darkness,” the president said. “The more success that we’ve achieved, the more unhinged the radical left has become. Anarchists and violent mobs have rioted in our Democrat-run cities, attacking police and tearing down statues.”

The president offered a litany of what he called his administration’s accomplishments over nearly four years, including less regulations, lower taxes, the appointment of conservative judges, staunch support for guns, anti-immigrant policies and support for police. At one point he claimed to represent “the bright future, not the dark future that you saw last night and for the last four days.”

“I’m the only thing standing between the American dream and total anarchy, madness and chaos and that’s what it is,” he said.