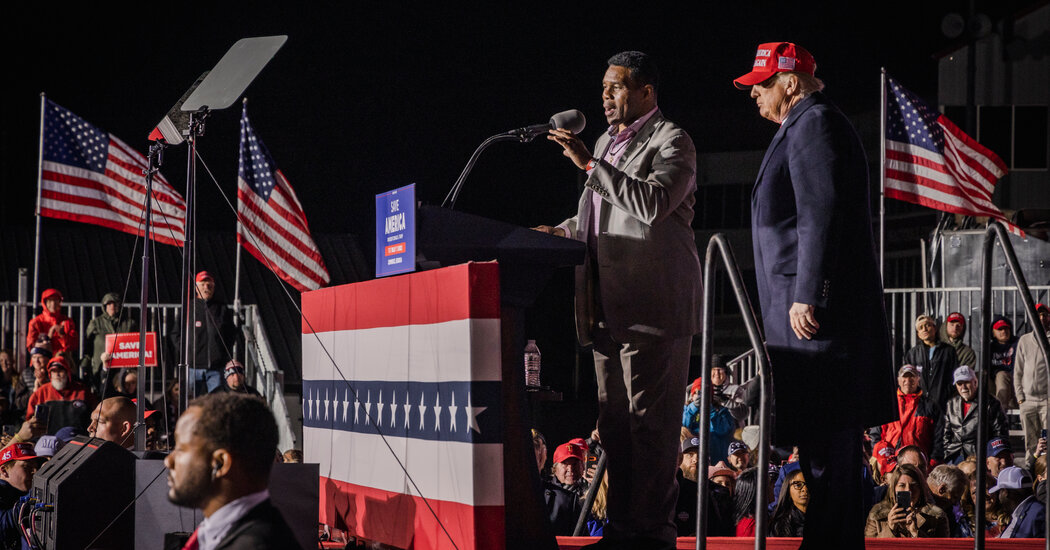 Donald J. Trump will not cross the Florida state line to campaign with Herschel Walker during the final week of the Georgia Senate runoff election, after both camps decided the former president’s appearance carried more political risks than rewards, campaign officials for the two Republicans said on Monday.

Instead of holding one of his signature campaign rallies, Mr. Trump is planning a call with supporters in the state and will continue sending online fund-raising pleas for Mr. Walker, two people with knowledge of the planning said.

The decision to keep Mr. Trump out of the spotlight was a response largely to the former president’s political style and image, which can energize his core supporters but also motivate Democratic voters and turn off significant segments of moderate Republicans.

In Georgia, that political math has become a net deficit for Mr. Trump, who opened his 2024 presidential campaign two weeks ago. In 2020, he was the first Republican presidential candidate to lose the state in 28 years. Earlier this year, his handpicked primary challengers to Gov. Brian Kemp and Secretary of State Brad Raffensperger were both trounced.

Mr. Trump also appeared to be a factor in the state’s general election in November. Roughly one in three Georgia Republicans who voted said they were not supporters of Mr. Trump’s “Make America Great Again” movement. Mr. Kemp won 90 percent of those voters while winning re-election by 7.5 points, according to the AP VoteCast survey of 2022 voters.

Georgia Senate Runoff: What to Know

In the Senate race, Mr. Warnock finished with less than 50 percent of the vote, forcing a runoff on Dec. 6 with Mr. Walker under Georgia law.

Mr. Trump has held two campaign rallies with Mr. Walker, one in September 2021 and another last March. His super PAC, MAGA Inc., spent $3.6 million broadcasting TV ads in the state for Mr. Walker, but Mr. Trump did not hold a rally in Georgia once Mr. Walker became a general-election candidate.

The decision to steer clear of Georgia during the final stretch of the runoff contrasts with Mr. Trump’s approach two years ago, when he held two large rallies before the two Senate runoffs in Georgia. Republicans lost both of those contests, and the Democrats took control of the chamber.

This time, Democrats have already secured the Senate majority for another two years by defending all of their incumbents and flipping control of a seat in Pennsylvania, where Mr. Trump’s preferred candidate, Mehmet Oz, lost to Lt. Gov. John Fetterman, a Democrat.

Republicans have been grappling with the former president’s broader effect on the midterm elections, in which his endorsed candidates lost key races for House and Senate, as well as high-profile contests for governor and secretary of state in battleground states.

Mr. Trump had been teasing a visit to Georgia for weeks and during his speech at Mar-a-Lago declaring his candidacy, he offered his full support of Mr. Walker, calling him “a fabulous human being who loves our country” and imploring all of his supporters in Georgia to vote for him. Days later, the Warnock campaign cut a 30-second advertisement that consisted entirely of footage of that portion of Mr. Trump’s speech.

Mr. Walker’s campaign is in a crucial period, as it enters the final week of Georgia’s runoff window and only week of early voting. On Nov. 8, he lagged behind the rest of the G.O.P. ticket in the state and garnered roughly 200,000 fewer votes than Governor Kemp.

Several Republican figures, including Senators Lindsey Graham and Ted Cruz alongside the Republican National Committee chairwoman, Ronna McDaniel, have made frequent trips to the Peach State to campaign for Mr. Walker. Mr. Kemp also appeared with Mr. Walker at one campaign stop in a Metro Atlanta suburb and cut an advertisement for him running in Atlanta markets.