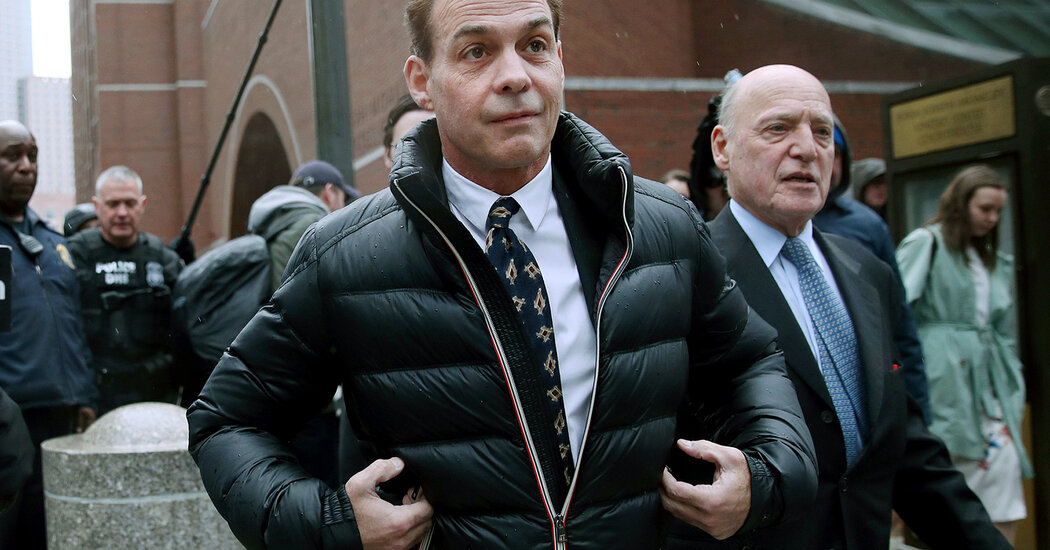 CAMBRIDGE, Mass. — He was not among the most famous people ensnared in the sweeping college admissions investigation known as Operation Varsity Blues, which included Hollywood celebrities and a prominent designer, but he was among the more colorful: the founder of a Miami private investment firm who was a fan of Burning Man and known for lavish parties.

And on Wednesday, the investor, Robert Zangrillo, was among 73 people pardoned by Donald J. Trump during the former president’s final hours in office, absolving him of responsibility in a case that has sent other parents to prison.

In June 2018, according to prosecutors, Mr. Zangrillo and his daughter Amber got on the phone with a college consultant to discuss her college prospects. She had already been rejected once by the University of Southern California, but the consultant, William Singer, had a plan to get her in as a transfer student, according to court documents.

Mr. Singer, who is cooperating with prosecutors, told the father and daughter that he had convinced U.S.C. athletic officials to designate Ms. Zangrillo as a recruit for the crew team, even though she did not row competitively, in exchange for “help.”

But there was more to the plan, according to prosecutors. To secure her admission, Ms. Zangrillo needed to finish online classes that she had listed on her application, and that was proving to be a problem. On the phone call, which was recorded by investigators, Ms. Zangrillo asked Mr. Singer what he was doing about an “F” she had received in an online art history class, the documents show. Mr. Singer said that an employee of his was retaking the class for her and was almost done.

Mr. Zangrillo asked: Could the employee also take his daughter’s biology class? The employee, who was on the call, said she could.

Ms. Zangrillo was admitted to U.S.C. that same month. Nine months later, in March 2019, Mr. Zangrillo was arrested and charged with fraud. Prosecutors said he had paid $250,000 as part of a conspiracy to defraud U.S.C. of an admissions spot. He pleaded not guilty and was set to stand trial in September.

His lawyer, Martin Weinberg, had argued that Mr. Zangrillo had made a legitimate donation to the university and that, rather than being a victim, U.S.C. had welcomed donations by people seeking to improve their children’s chances in the admissions process. Mr. Zangrillo and Mr. Weinberg declined to comment on Wednesday.

Some of the more than three dozen other parents charged in the Varsity Blues investigation, including the Hollywood actresses Felicity Huffman and Lori Loughlin, have pleaded guilty and completed prison sentences.

The White House, in its list of the pardons issued by Mr. Trump on Wednesday, described Mr. Zangrillo as “a well-respected business leader and philanthropist” and said that Ms. Zangrillo “did not have others take standardized tests for her” — a reference to other parents in the case who were charged with falsifying their children’s SAT or ACT scores.

The U.S. attorney for the district of Massachusetts, Andrew E. Lelling, a Trump appointee who spearheaded the admissions case, said in a statement that the charges against Mr. Zangrillo, “including having his own daughter knowingly participate in a scheme to lie to U.S.C. about her accomplishments and grades, illustrates precisely why Operation Varsity Blues was necessary in the first place.”

President Trump has discussed potential pardons that could test the boundaries of his constitutional power to nullify criminal liability. Here’s some clarity on his ability to pardon.

Mr. Lelling added, “It is the highest calling of the criminal justice system to hold all people equally to account, regardless of wealth or privilege.”

How Mr. Zangrillo came to be pardoned is unclear. Representatives for two people the White House listed in support of its action — the billionaire investor Thomas J. Barrack Jr., a close friend of Mr. Trump’s and a U.S.C. trustee, and Sean Parker, a co-founder of Napster and early president of Facebook — said that they had not been involved.

“Mr. Barrack had nothing whatsoever to do with Mr. Zangrillo’s pardon,” a spokesman said. “He never intervened and never had discussion with anyone about it. All reports to the contrary are patently false.”

A spokesman for Mr. Parker said he did not know Mr. Zangrillo, had not advocated for him, and did not know how his name had ended up on the White House’s list.

Mr. Zangrillo has not donated to Mr. Trump and does not have a long history of political contributions.

Some parents charged in the admissions case have seen their careers implode. But as of October, Mr. Zangrillo remained employed by his firm, Dragon Global, according to a court filing from his lawyer, and received permission by the court to travel for business meetings to Cancun, Playa del Carmen and Tulum, Mexico.