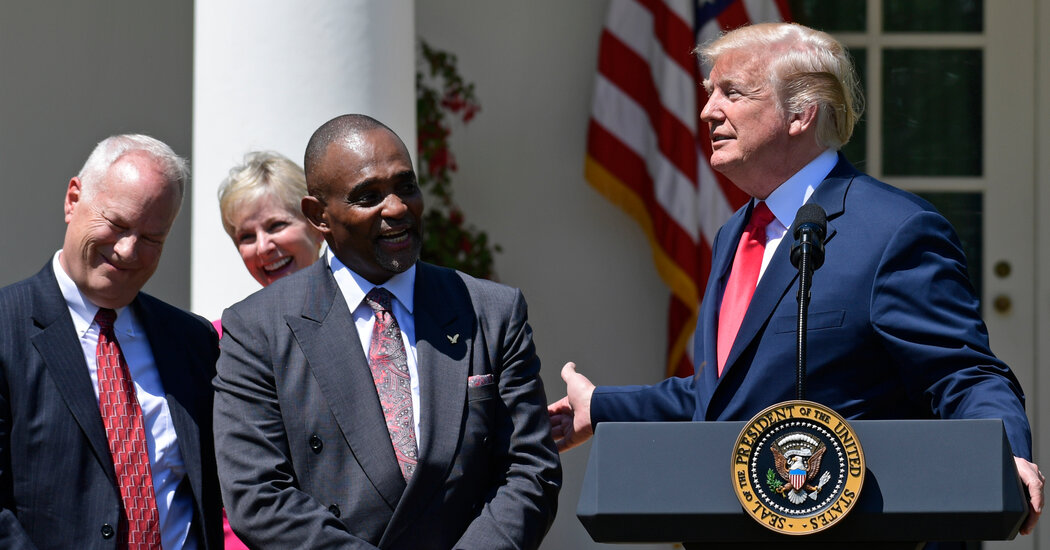 WASHINGTON — President Trump on Tuesday pardoned a man convicted of robbing a bank in Nevada who now runs a nonprofit for prisoners, shortly before the Republican National Convention entered its second night.

The White House announced the pardon of the man, Jon Ponder, in a seven-minute video in which the president called Mr. Ponder’s life “a beautiful testament to the power of redemption.”

As Mr. Trump’s bid for re-election enters its last stretch, the announcement appears to be an attempt by the president to draw voters’ attention to criminal justice, a subject that he has promoted as a signature initiative of his time in office. That includes bipartisan legislation he signed in 2018 that made substantial changes to federal prison and sentencing laws.

“We believe that each person is made by God for a purpose,” Mr. Trump said in the video. “I will continue to give all Americans, including former inmates, the best chance to build a new life and achieve their own American dream, and a great American dream it is.”

The president has highlighted Mr. Ponder’s story in recent years, showering praise on him for using his Christian faith as a pathway for getting out of prison.

In 2005, Mr. Ponder pleaded guilty to bank robbery. After being released from prison in October 2009, Mr. Ponder started Hope for Prisoners in 2010, a nonprofit that provides job training, mentorship and counseling to individuals leaving jail.

Mr. Ponder met the president in 2018, when he was invited to a Rose Garden ceremony for a National Day of Prayer. He was accompanied by Richard Beasley, a retired F.B.I. agent who arrested Mr. Ponder.

There, Mr. Trump highlighted Mr. Ponder’s commitment to Christianity and his friendship with Mr. Beasley. Both Mr. Ponder and Mr. Beasley spoke during the convention on Tuesday night, where the second day of programming carried the theme of “Land of Opportunity.”

In February, Mr. Trump hinted at a pardon for Mr. Ponder when he attended a graduation ceremony for Hope for Prisoners.

Since he took office, Mr. Trump has pardoned or granted clemency to people he personally knows or whose cases strike a chord with him, including Rod R. Blagojevich, the former Illinois governor who was serving a prison sentence related to a conviction on corruption charges.

In July, Mr. Trump commuted the sentence of his longtime friend and political adviser Roger J. Stone Jr., who was convicted on charges stemming from the investigation into whether the Trump campaign conspired with Russian officials in the 2016 election.

Last week, Mr. Trump posthumously pardoned Susan B. Anthony, a women’s suffragist who was arrested after voting illegally in 1872, in an attempt to appeal to female voters on the 100th anniversary of the 19th Amendment giving them the right to vote.

In March, Mr. Ponder was pardoned for his state-level offenses, which included a handful of domestic violence charges.

In 2005, Mr. Ponder, then a dairy manager at a Wal-Mart Supercenter in Las Vegas, went on a crime spree that culminated with two bank robberies in which he handed threatening notes to tellers, claiming he had a gun and demanding money.

By then, he had already pulled a series of similar heists at a dry cleaner and several fast-food restaurants in the area, and his criminal record in Nevada included charges of domestic violence from 1995 and 1998 and a case of attempted domestic violence in 2001.

In a letter to Judge James C. Mahan of Federal District Court, Mr. Ponder expressed remorse for his robberies and asked for leniency, pledging to take advantage of his time in prison to improve his education with the ultimate goal of obtaining a degree.

“With every ounce of energy I can muster, I will use this term in prison to reinvent myself so that I may lead my son by positive examples. I owe him that,” wrote Mr. Ponder, who would later blame his crimes on addiction to “every substance known to man.”

When a Nevada pardon board approved a conditional pardon to Mr. Ponder for episodes of domestic violence, Gov. Steve Sisolak, a Democrat and a member of the panel, expressed reservations.

Mr. Sisolak said he did not want Mr. Ponder to be given special treatment because of his celebrity, saying that “all domestic violence cases are major to me.”