Trump lashes out at Biden and Harris and chides a reporter for wearing a mask. 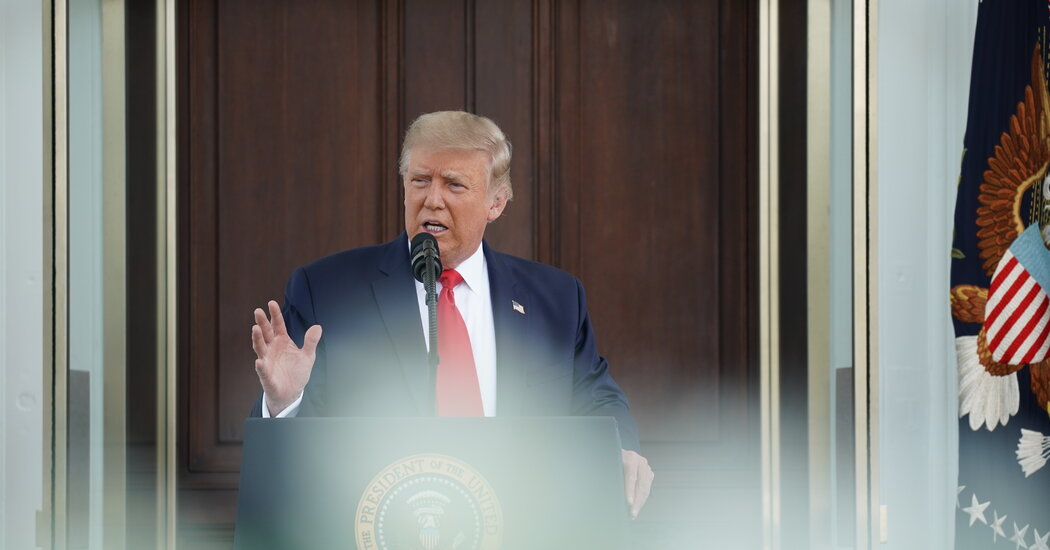 During a Labor Day news conference outside the White House, President Trump unleashed a personal screed against his rival for president and criticized a reporter for asking him a question while wearing a mask.

“The issue of what happened when you were in France continues to be a story —” the reporter, Jeff Mason of Reuters, began.

The president cut him off.

“You’re going to have to take that off, please,” Mr. Trump said. “Just, you can take it off, you’re — how many feet are you away?”

“Well,” Mr. Trump said, “if you don’t take it off, you’re very muffled, so if you would take it off would be a lot easier.”

“I’ll just speak a lot louder. Is that better?”

A little later, another reporter took his mask off as he prepared to ask Mr. Trump a question.

“Based on some of your recent tweets, sir,” he began.

Mr. Trump interrupted again, this time to praise the reporter.

“You sound so clear, as opposed to everybody else where they refuse,” he said.

Mr. Trump spent much of the rest of the news conference insulting his opponents and airing grievances. He called former Vice President Joseph R. Biden Jr. a “stupid person” and dismissed Senator Kamala Harris, Mr. Biden’s running mate, as “not a competent person” whom he predicted would never serve as president.

Mr. Trump, who has been hoping that an October announcement of a vaccine to treat the coronavirus could help his electoral chances in November, said that Mr. Biden and Ms. Harris were spreading “reckless anti-vaccine rhetoric” because they have raised questions about his political motivations for an accelerated timeline.

Mr. Trump said of Ms. Harris, “she will never be president,” and accused her of “disparaging a vaccine so that people don’t think the achievement was a great achievement.”

Mr. Trump also defended himself against allegations that he had privately referred to American troops killed in combat as “losers” and “suckers.” He suggested the accusations came from Pentagon leaders, whom he described as war profiteers.

“They want to do nothing but fight wars so that all of those wonderful companies that make the bombs, who make the planes, and make everything else stay happy,” Mr. Trump said of the officers he commands, making no mention of his own choice for defense secretary, Mark T. Esper, who was an executive at the defense contractor Raytheon.

The broadside, coming after current and retired officers have been notably quiet about claims that the president described those killed in action as “losers,” only added more fuel to an explosive story line that many Republicans want Mr. Trump to put behind him.