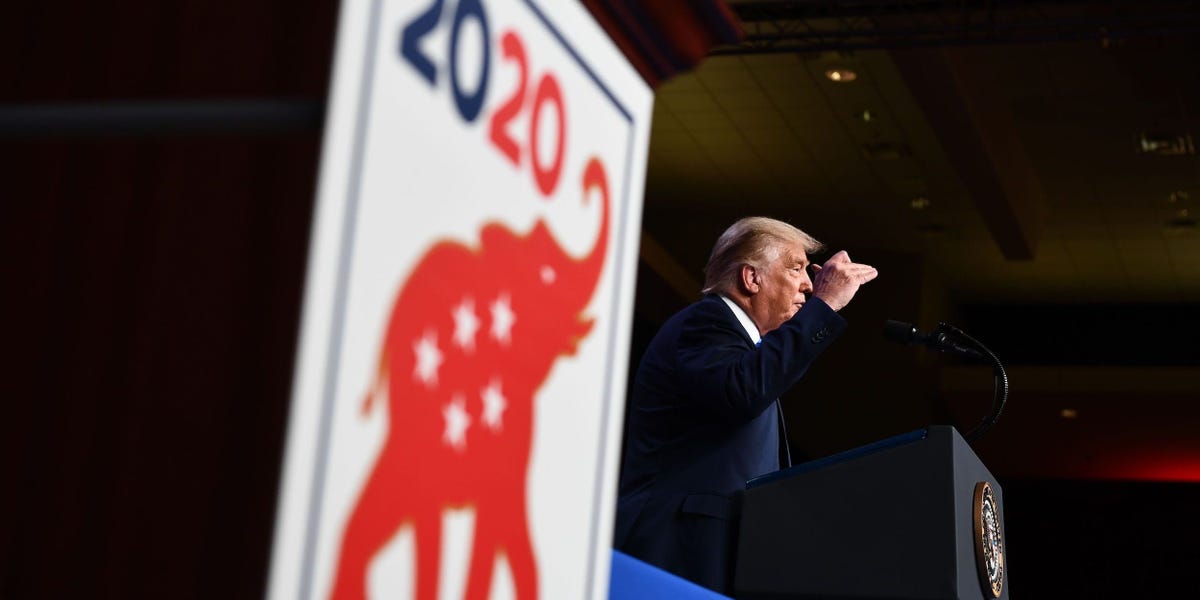 Although the Republican National Convention’s actual televised programming was not supposed to start until 9 pm EST, President Donald Trump was on the stage in Charlotte, N.C., by 1 pm to deliver a typical MAGA rally speech.

“The pandemic, we’re handling it very well. Look at the crowds,” Trump said in one of several false remarks during his rambling speech, which lasted about an hour.

The president dedicated most of the first half hour of his speech to repeating his favorite lies about voting by mail.

At one point, CNN cut away from his speech, citing the growing number of inaccurate claims Trump made about voting.

Trump repeated his usual false statements, without presenting any evidence, that voting by mail is more prone to fraud, and that the Democrats are promoting “ballot harvesting” — which is illegal, and not a component of Democratic nominee Joe Biden’s campaign nor the actual Democratic Party’s platform.

His comments on voting by mail were hard to follow at times, with Trump veering between hypothetical examples and false claims of what is currently happening in the country.

Trump also falsely claimed that 80 million ballots will be sent to Americans who aren’t even registered to vote, and that various crews will be going door to door to collect them.

Many states have expanded their mail-in voting parameters during the coronavirus pandemic, and each state’s deadlines can be found here.

Beginning a series of efforts to provoke outrage from opponents, Trump corrected the crowd’s “four more years” chants by saying, “If you really want to drive them crazy, you say 12 more years.”

The president also made an incorrect assertion that the Mexican border wall is almost done, claimed that farmers who call him “Sir” tell him how much they love China, complained about how MSNBC, CNN and Fox News covered the roll call vote earlier in the hour, and said he believes the country was more divided under President Barack Obama.

Trump reportedly plans on speaking at the convention at least four more times this week.