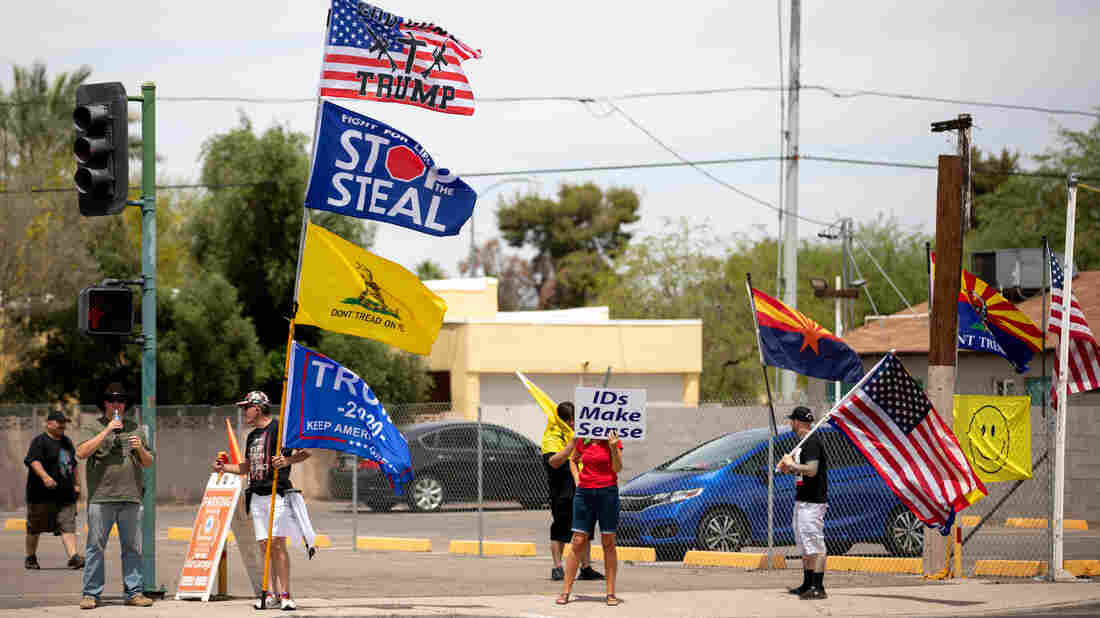 Demonstrators in support of former President Donald Trump gather on May 1 outside the Arizona Veterans Memorial Coliseum in Phoenix, where a controversial 2020 general election review was set to begin. Trump has heartily supported the audit. Courtney Pedroza/Getty Images hide caption 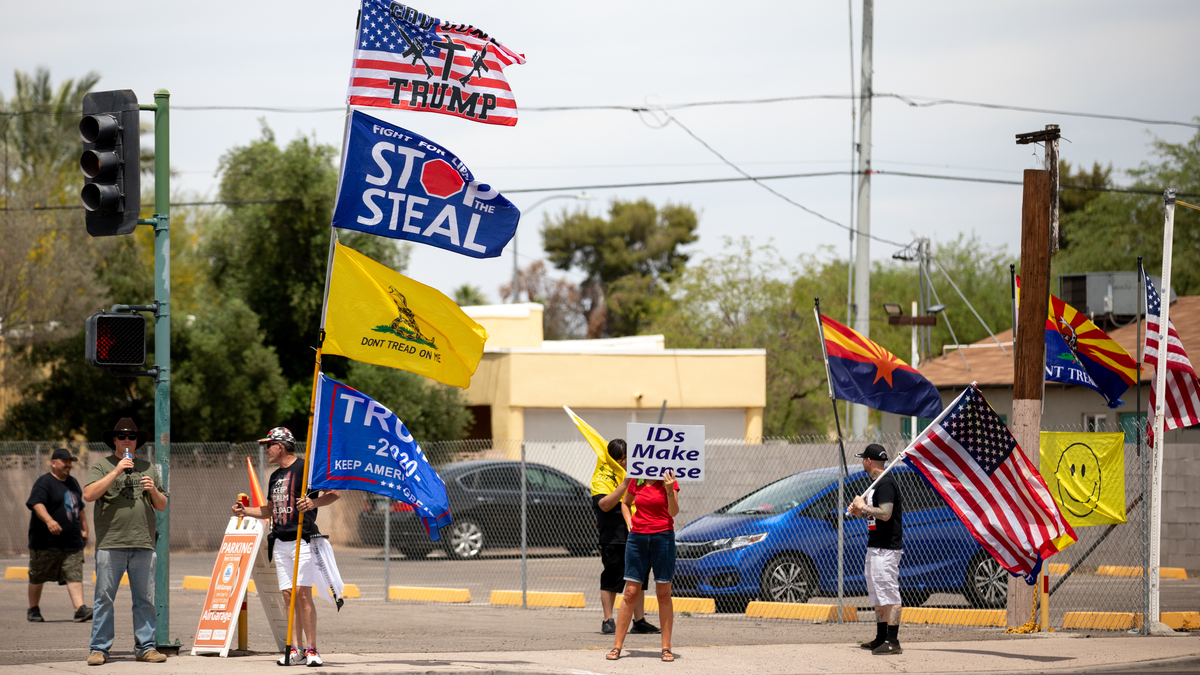 Demonstrators in support of former President Donald Trump gather on May 1 outside the Arizona Veterans Memorial Coliseum in Phoenix, where a controversial 2020 general election review was set to begin. Trump has heartily supported the audit.

With Twitter taken away from him, former President Donald Trump has been largely out of the spotlight and unable to drive news narratives the way he did when he was president and on social media.

But Trump continues to have great influence with Republican elected leaders because of his continued popularity with the GOP base.

And he’s ramping up the messages he’s sending for all to see on the blog-like portion of his post-presidency website. What’s he focused on? Relitigating his election loss.

An analysis of Trump’s posts on the site shows that his entries have spiked so far this month and that overall a plurality of the statements have mentioned his 2020 election loss or baseless claims of fraud or have cited efforts at relitigating the results.

One focus for the former president has been the controversial election review that continues in Arizona. And the messages come as that state and other Republican-led states, like Georgia, have enacted new voting restrictions.

By the numbers, here’s a look at the kinds of posts that Trump has put out, through midday Wednesday:

It’s clear where Trump’s focus is. He wants to continue to influence the GOP message and be a kingmaker. Given his current front-runner status for the 2024 presidential nomination and his popularity within the Republican Party, he’s well situated to do that.

And Republican elected officials appear to be listening.

On Wednesday, the House passed a measure to create a 9/11-style commission to examine the Jan. 6 insurrection at the Capitol. The bill passed with all Democrats and a few dozen Republicans supporting it. But Republican House leadership formally opposed it and urged conference members to vote against it. (Republican Senate leader Mitch McConnell also opposes the measure.)

“Given the political misdirections that have marred this process, given the now duplicative and potentially counterproductive nature of this effort,” House Minority Leader Kevin McCarthy said in a statement Tuesday, “and given the Speaker’s shortsighted scope that does not examine interrelated forms of political violence in America, I cannot support this legislation.”

That’s right in line with what Trump said later the same day on his website.

“Republicans in the House and Senate should not approve the Democrat trap of the January 6 Commission,” he wrote. “It is just more partisan unfairness and unless the murders, riots, and fire bombings in Portland, Minneapolis, Seattle, Chicago, and New York are also going to be studied, this discussion should be ended immediately.”

On Jan. 6, as the violence was unfolding, McCarthy phoned Trump, urging him to call for calm. On the House floor, McCarthy voiced disapproval of Trump’s actions that day, but since then, he has done an about-face. McCarthy met with Trump at his Mar-a-Lago Club in Florida, posing for a photo together.

And after initially backing Cheney to stay in leadership, McCarthy later joined ranks with those calling for her ouster.

Cheney voted for Trump’s impeachment and has continued to speak out against the former president, his baseless claims about the election and his role in the Jan. 6 insurrection. Cheney was voted out of conference leadership last week.