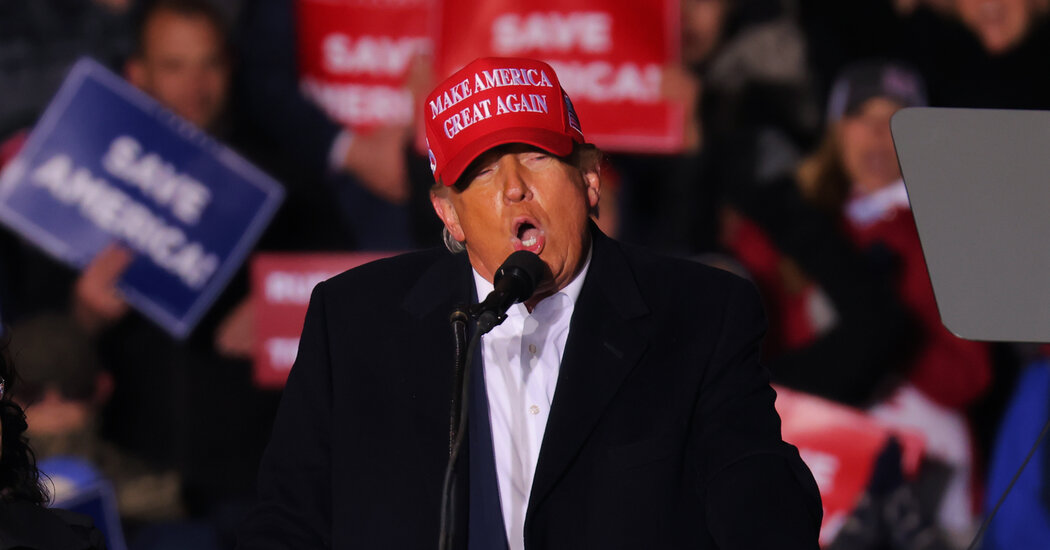 Donald J. Trump’s presidential campaign has been ordered to pay more than $300,000 in legal fees and expenses to a former employee who the campaign’s lawyers said had violated the terms of a nondisclosure agreement when she accused Mr. Trump of forcibly kissing her in 2016.

The award, the culmination of an arbitration claim that was dismissed in November, represents the latest instance of Mr. Trump’s failure to use a nondisclosure agreement successfully against an ex-worker.

The resolution of the claim, which Mr. Trump’s campaign filed in September 2019, came less than a year after he had lost similar efforts to enforce nondisclosure agreements against Jessica Denson, a former campaign worker, and Omarosa Manigault Newman, a former White House aide and a star on “The Apprentice.”

Victor E. Bianchini, a retired federal judge, cited both of those cases in his decision on March 10, when he ruled in favor of Alva Johnson, a former campaign worker who in 2019 unsuccessfully sued Mr. Trump, claiming he kissed her on the mouth against her will during a campaign stop in August 2016.

The Trump campaign “was invested in silencing other employees that were terminated or had somehow criticized the candidate in other ways,” Judge Bianchini wrote, adding that the campaign’s “demand for arbitration appears to have been principally motivated by upholding its NDA and curtailing any criticism of the candidate.”

Liz Harrington, a spokeswoman for Mr. Trump, said the decision to award money to Ms. Johnson and her lawyers after a federal judge had dismissed her case was “pathetic and totally contrary to the rule of law and any reasonable sense of fairness.”

“Anyone can see that Johnson’s blatant lies and bad faith conduct completely preclude her from profiting from her illicit conduct,” she said in a statement.

After Judge Bianchini dismissed the arbitration claim in November, calling the agreement “vague and unenforceable” in its confidentiality provisions, Ms. Johnson’s lawyers made a motion demanding that the Trump campaign pay for legal fees and other expenses.

The March 10 ruling ordered the Trump campaign to pay more than $303,000 for Ms. Johnson’s legal fees and expenses.

Ms. Johnson, 46, said she was “really happy” with the decision.

Mr. Trump’s lawyers “wanted to handcuff me for four years,” Ms. Johnson said in a brief interview on Friday. “They came after me pretty hard.”

Her lawyer, Hassan Zavareei, said on Friday that the Trump campaign had tried to use the nondisclosure agreement “as a cudgel to silence what we view as important public speech by one of the few minority campaign workers.”

In early 2019, Ms. Johnson, who is Black, filed a federal lawsuit against Mr. Trump, accusing him of grabbing her during a campaign stop in 2016 and kissing her as she tried to turn away.

“I immediately felt violated because I wasn’t expecting it or wanting it,” Ms. Johnson told The Washington Post in February 2019.

But a federal judge questioned her version of events after viewing a video of the encounter and ultimately dismissed the suit in June 2019.

Judge William Jung of the U.S. District Court for the Middle District of Florida described the complaint as “political” and told Ms. Johnson she could file an amended lawsuit. She ultimately decided not to pursue the case, saying she had been threatened by Trump supporters and believed she would not be successful before Judge Jung, who was nominated to the bench in 2017 by Mr. Trump.

Judge Bianchini said that he had viewed the video and had concluded that nothing “improper” appeared to have taken place.

“No objective person could view the video of the encounter as anything even remotely supporting an accusation of battery, kissed, assaulted or anything else similar,” he wrote. “The federal judge saw it, and the arbitrator sees it.”

Mr. Trump’s campaign could have filed complaints against Ms. Johnson for “malicious prosecution or defamation in an appropriate forum,” Judge Bianchini wrote.

Instead, his campaign filed an arbitration complaint on Sept. 23, 2019, that said Ms. Johnson had breached a nondisclosure agreement with the campaign by “disclosing confidential information” and “making disparaging statements about Trump.”

That agreement, Judge Bianchini wrote, has been “determined to be unconstitutional” in the cases of Ms. Denson, Ms. Manigault Newman and Mary Trump, Mr. Trump’s niece, who wrote a tell-all memoir about the family.

Even if the motive of the campaign was not to silence Ms. Johnson, “the enforcement of the NDA was an inappropriate choice because of its unconstitutionality,” Judge Bianchini wrote.

Judge Bianchini said he had noted in his November dismissal of the arbitration claim that he believed Ms. Johnson was “untruthful in her accusations” against Mr. Trump. In the March 10 ruling, he described how the video showed Ms. Johnson “offering her cheek” with her lips “in the air next to his cheek.”

It was “understandable” that the Trump campaign would be upset at Ms. Johnson’s recouping costs in an arbitration that stemmed from a case that was ultimately dismissed, Judge Bianchini wrote.

But blaming the arbitration on her “is misguided and incorrect,” he said in his ruling.

Mr. Zavareei said that he rejected Judge Bianchini’s characterization of Ms. Johnson’s claims. Their validity should have been determined by a jury, not “two older white judges,” he said.

“It’s our position that that is the sort of conduct that shouldn’t be accepted in any workplace,” Mr. Zavareei said. “She’s a worker in the campaign. She’s the only person who he touched and kissed.”