Trump barnstorms as polls show Biden with the edge – POLITICO 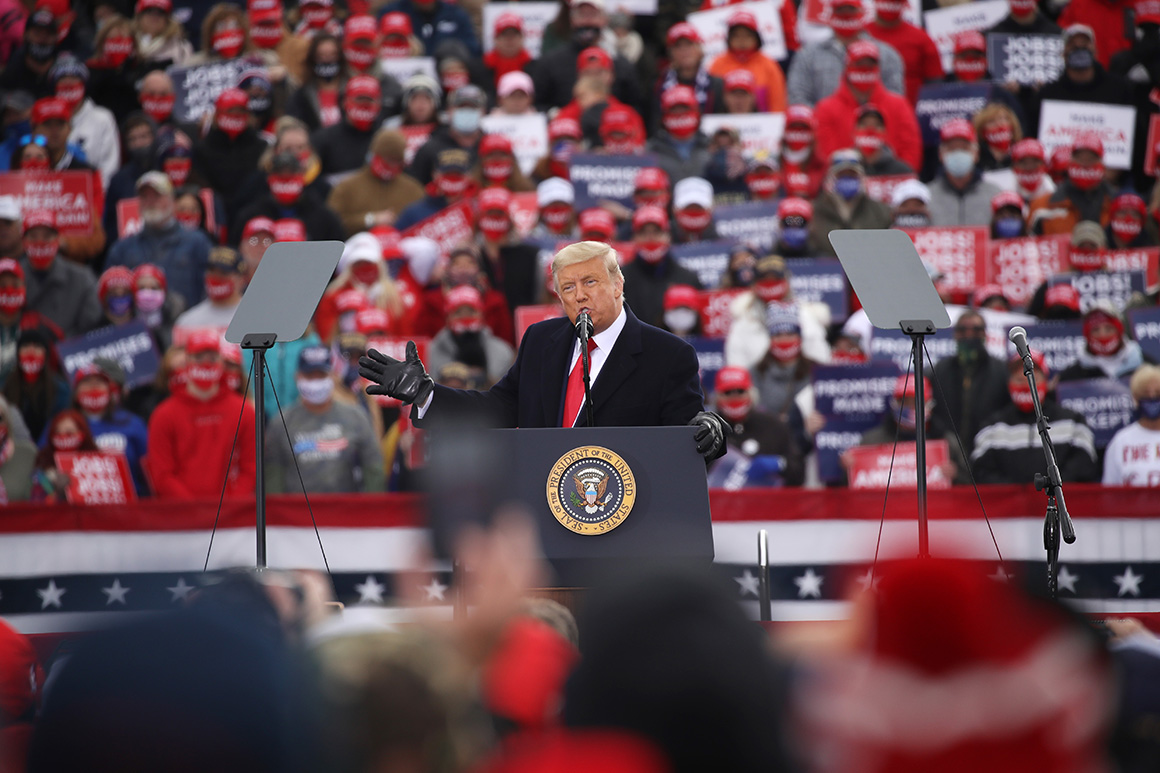 Biden goes for the key state

The reason Trump did four rallies in Pennsylvania on Saturday is because the election is likely over for him if he loses there.

Biden will follow Trump into the state today in an effort to put it out of reach, appearing at two events in Philadelphia. The city and its immediate suburbs will unquestionably vote Democratic, but Democrats are hoping explosive turnout there can overwhelm Trump in more rural, conservative areas of the state.

Biden is leading Trump in Pennsylvania by about 5 percentage points, according to the FiveThirtyEight polling average.

While Biden is in Philadelphia, his running mate, Sen. Kamala Harris, will be campaigning in Georgia and North Carolina.

In the final week of the campaign, Biden is investing the most heavily in Pennsylvania and Florida, with buys of $9.1 million and $8.5 million, respectively, according to the ad tracking firm Advertising Analytics. Outside Democratic groups are pumping millions of dollars more into those states from Oct. 27 through Tuesday.

At a massive fundraising disadvantage, Trump and the Republican National Committee have about $3.6 million in ads up in Pennsylvania in the final week, though the pro-Trump group America First Action has pumped another $8.4 million into the state. Trump and the RNC are spending about $5.6 million in Michigan and about $4.9 million in North Carolina, their other big buys.

The relatively steady ad spending is one more sign of how static the race has been. For all of the upheaval of 2020 — from a global pandemic to economic collapse and widespread civil unrest — the presidential race hasn’t moved much at all in months.

If you’re looking for something new, it’ll be in the content, not the placement of the ads. Biden on Saturday released one narrated by Bruce Springsteen. Meanwhile, Boston hockey legend Bobby Orr endorsed Trump in a full-page ad in the New Hampshire Union Leader.

Outside of the Pacific Northwest (where folks vote by mail), basically no rain or snow is in the forecast across the entire country. That means voters waiting in pandemic-mandated lines outside polling places should stay dry, if maybe a little chilly.

In Trump’s view, it’s “highly likely” there will not be a result on election night, in part because of the days it will take to count ballots in Pennsylvania, he told a crowd in Newton, Pa., on Saturday.

He’s right — and Pennsylvania is among several key states where state laws basically make it impossible for election officials to count all the votes, especially mail ballots, on election night. Trump has tweeted repeatedly about wanting to know the results of the election, but state officials are going to follow their local rules and continue counting valid ballots in the days and weeks after Election Day, as they have done for years.

Trump, who has repeatedly advanced baseless claims that the election will be “rigged,” then offered his prediction for what that period of vote-counting will entail.

“You’re going to have bedlam in our country,” he said.