Trump and his base continue downplaying the pandemic ahead of the election. 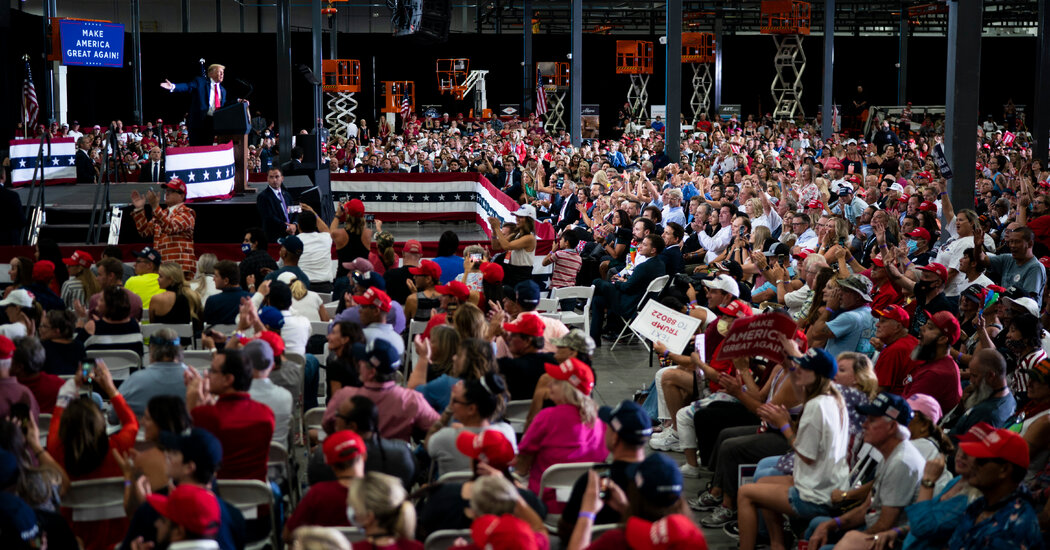 From resistance to face masks and scorn for the science of the coronavirus to predicting the imminent arrival of a vaccine while downplaying the death count, President Trump and a sizable number of his supporters have aligned emphatically behind an alternate reality minimizing a pandemic that has killed almost 200,000 Americans and gutted the economy.

This mix of denial and defiance runs contrary to the overwhelming evidence about the spread and toll of the virus, and it is at the center of Mr. Trump’s re-election effort as early voting begins in Minnesota, Virginia and other states. It is an outlook shared among his most loyal supporters and pushed by many of his allies in the political and news media establishment.

To some extent, the viewpoint reflects the resentments of Americans living in regions of the country, like upstate New York and the upper reaches of Michigan, that have been relatively untouched by the virus but have had to endure drastic business shutdown measures that have left many residents confined to their homes without jobs or income.

“The people who need to shelter in place should do so, but I do not feel that that should ruin the economy,” said Karla Mueller, a Republican and church custodian who lives in Fond du Lac, Wis. “I think it’s ruined a lot of people’s small businesses. I just don’t feel that that’s necessary.”

But it is also a direct result of the look-the-other-way message that the Trump administration has sent with increasing urgency, pollsters and strategists say, as the president faces a strong challenge to re-election from Joseph R. Biden Jr., his Democratic opponent.

Mr. Trump has called on Twitter for people to “LIBERATE” states that have imposed stay-at-home orders, threatened to withhold aid from Democratic governors and undercut medical professionals who have cautioned against the use of unproven medical treatments and premature school reopenings.

He has attacked communities that have resisted reopening schools and business, and suggested the death count was either exaggerated or mainly a problem in blue states.

The president’s critics say his confrontational approach has kept the country from forming a consensus about how to fight the worst public health crisis in more than 100 years.