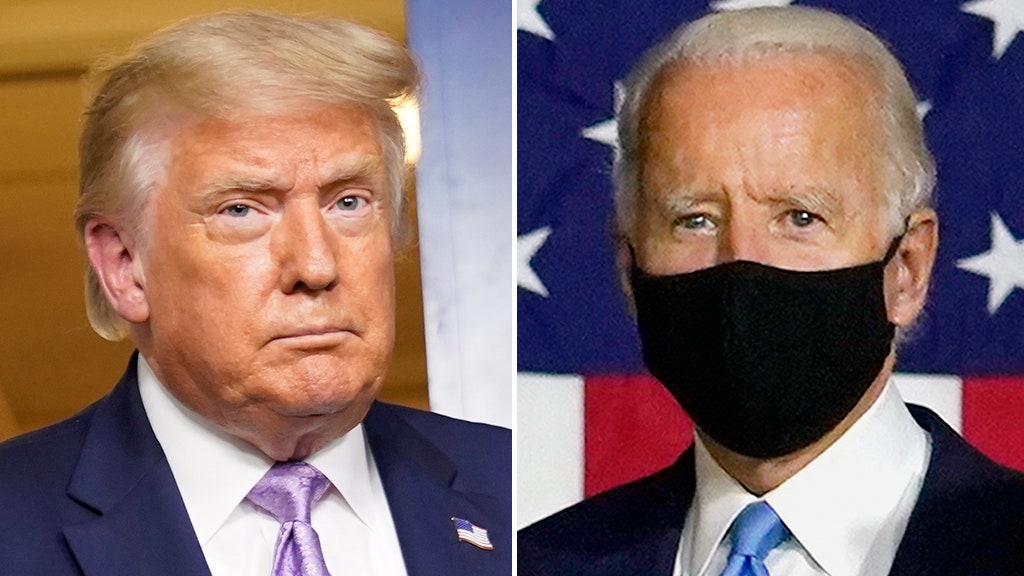 As Democratic presidential nominee Joe Biden and running mate Sen. Kamala Harris have ramped up their condemnation of violence gripping some American cities, allies of President Trump are challenging their sincerity, citing support by a number of Biden staffers and Harris herself for a group that helped bail out Minneapolis protesters.

“Sorry @JoeBiden, but you can’t claim to oppose riots and crime when your campaign is literally on the record bailing violent rioters out of jail!!! #BidenRiots,” Donald Trump Jr. tweeted.

“As predicted, Joe Biden today failed to condemn the left-wing mobs burning, looting, and terrorizing American cities,” Trump campaign Communications Director Tim Murtaugh said in a statement, after Biden used a speech in Pittsburgh to denounce rioters and looters, as well as accuse Trump of fueling the tensions. “He failed to apologize for his campaign staff donating to a fund which bailed violent criminals out of jail in Minneapolis.”

Biden has condemned the violence repeatedly throughout the summer even if he’s mentioned it on the virtual campaign trail far less often than Trump. The president highlights the unrest on a near-daily basis with harsh condemnations of the rioters and encouragement for supporters of his who clash with Black Lives Matter demonstrators and rioters.

“How can anyone take Trump seriously when he refuses to condemn someone who shot protestors on tape — killing two — and is currently in custody?” Biden Rapid Response Director Andrew Bates shot back Monday. The individual Bates was referring to is facing homicide charges for a shooting in Kenosha, though his lawyers maintain his actions were in self-defense.

“There is one candidate for president who unequivocally condemns violence, and that candidate is Joe Biden,” Bates said.

Biden last week condemned the violence in Kenosha, Wis., that flared after Jacob Blake, a Black man, was shot seven times in the back by a police officer. In late July, Biden condemned violence in Portland and called for the prosecution of “arsonists and anarchists,” leading the Portland Democratic Socialists of America to condemn him.

Before that Biden also condemned similar violence in Minneapolis after George Floyd, a Black man, died in the custody of that city’s police department.

And most recently Biden on Sunday condemned violence over the weekend in Portland, Ore., where Democratic Mayor Ted Wheeler has resisted Trump’s efforts to send in federal law enforcement despite months of continuing vandalism, arson and riots that have stemmed from anti-police brutality protests.

“The deadly violence we saw overnight in Portland is unacceptable,” Biden said Sunday of the incident. “Shooting in the streets of a great American city is unacceptable. I condemn violence of every kind by anyone, whether on the left or the right. And I challenge Donald Trump to do the same.”

Harris, D-Calif., added Sunday: “I join @JoeBiden in condemning this violence. This can not—and must not—be who we are. Americans deserve a president who will heal our country and bring people together—not fan the flames of hate and division.”

But Trump allies have pointed to a report by FOX9 in Minneapolis that revealed the Minnesota Freedom Fund (MFF) bailed out not only those involved in the unrest but alleged violent offenders — including Darnika Floyd, who was charged with second-degree murder after allegedly stabbing a friend to death, and Christopher Boswell, who was facing charges of sexual assault and kidnapping. FOX 9 also reported that Jaleel Stallings, who was accused of shooting at police during the May riots, was bailed out by MFF for $75,000.

FOX 9 reported that the MFF took in about $35 million in the wake of Floyd’s death. Some of that money came out of the pockets of several Biden campaign staffers who donated to the group. Harris herself also encouraged people to contribute to the bail fund.

However, it’s unclear exactly what percentage of the newly raised funds went toward bailing out protesters versus non-violent offenders or those who are alleged to have committed violent crimes.

“If you’re able to, chip in now to the @MNFreedomFund to help post bail for those protesting on the ground in Minnesota,” Harris tweeted in June.

“Cash bail is discrimination against the poor and must be abolished Let’s keep up this support for the @MNFreedomFund. Who’s next?” said Sal DeFrancesco, an organizer for the Biden campaign.

MFF was just one of many bail funds and progressive groups to see a cash surge amid the unrest in late May and early June.

BIDEN’S CONDEMNATION OF RIOT VIOLENCE ‘TOO LATE,’ TRUMP SAYS; WHAT THE RECORD SHOWS ON DEMS’ RESPONSE

“Our current criminal justice system incarcerates hundreds of thousands of people every year for their inability to pay money bail,” a spokesperson for the National Bail Fund Network, of which MFF is an affiliate, told Fox News. “As long as the pretrial detention and money bail system exist, community bail funds exist to get people free.”

“Will Joe Biden apologize for helping put cops in danger?” the campaign asked.

But Bates said it’s Trump who should face accountability for his behavior and performance in office, and blamed Trump for causing the violence.

“Donald Trump is the most lawless president in American history, and he has spent his entire term in office intentionally fomenting division, worsening pain, and fuelling racism for his own perceived political benefit,” the Biden spokesperson said. “His case for doing even more damage in a second term is so bankrupt that now he’s reduced to running on the violence and unrest that he has inflamed and that one of his top advisers recently celebrated – much of which he still refuses to denounce, and God knows why.”