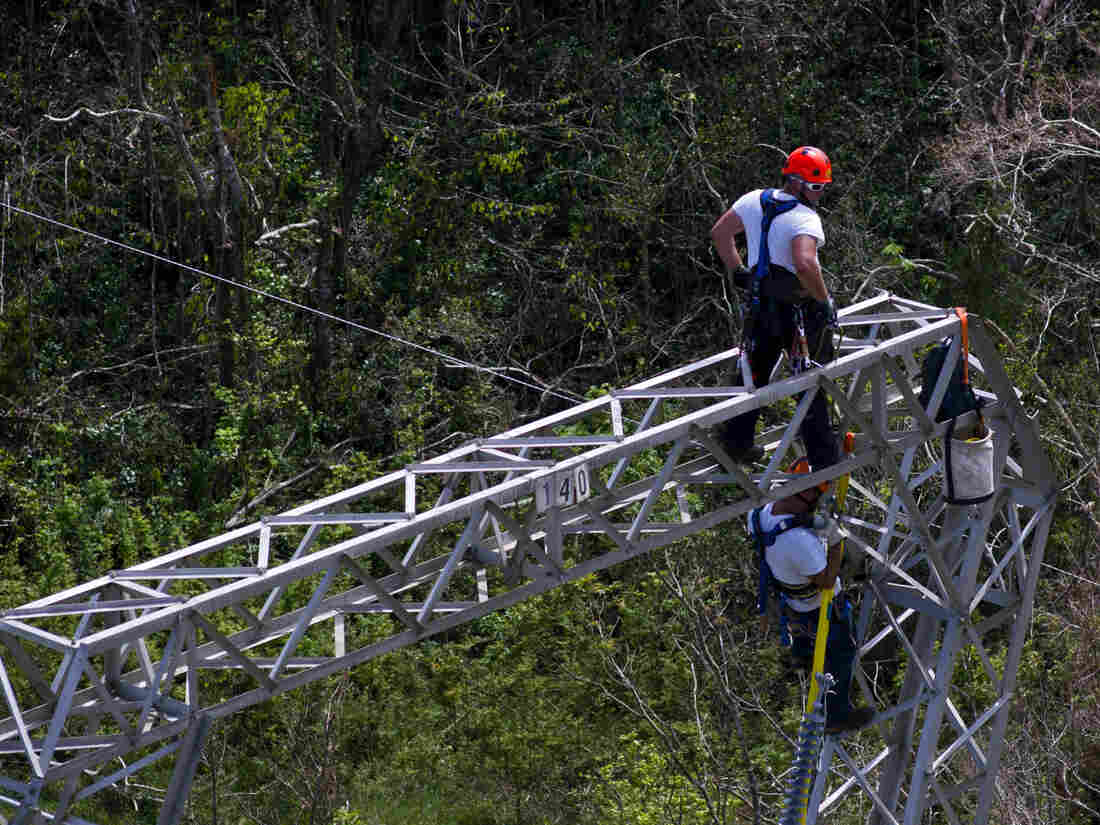 Workers restore power lines damaged by Hurricane Maria in Barceloneta, Puerto Rico, in 2017. The Trump administration says it will award nearly $13 billion in infrastructure grants to help the island recover from the storm that hit three years ago. Ramon Espinosa/AP hide caption 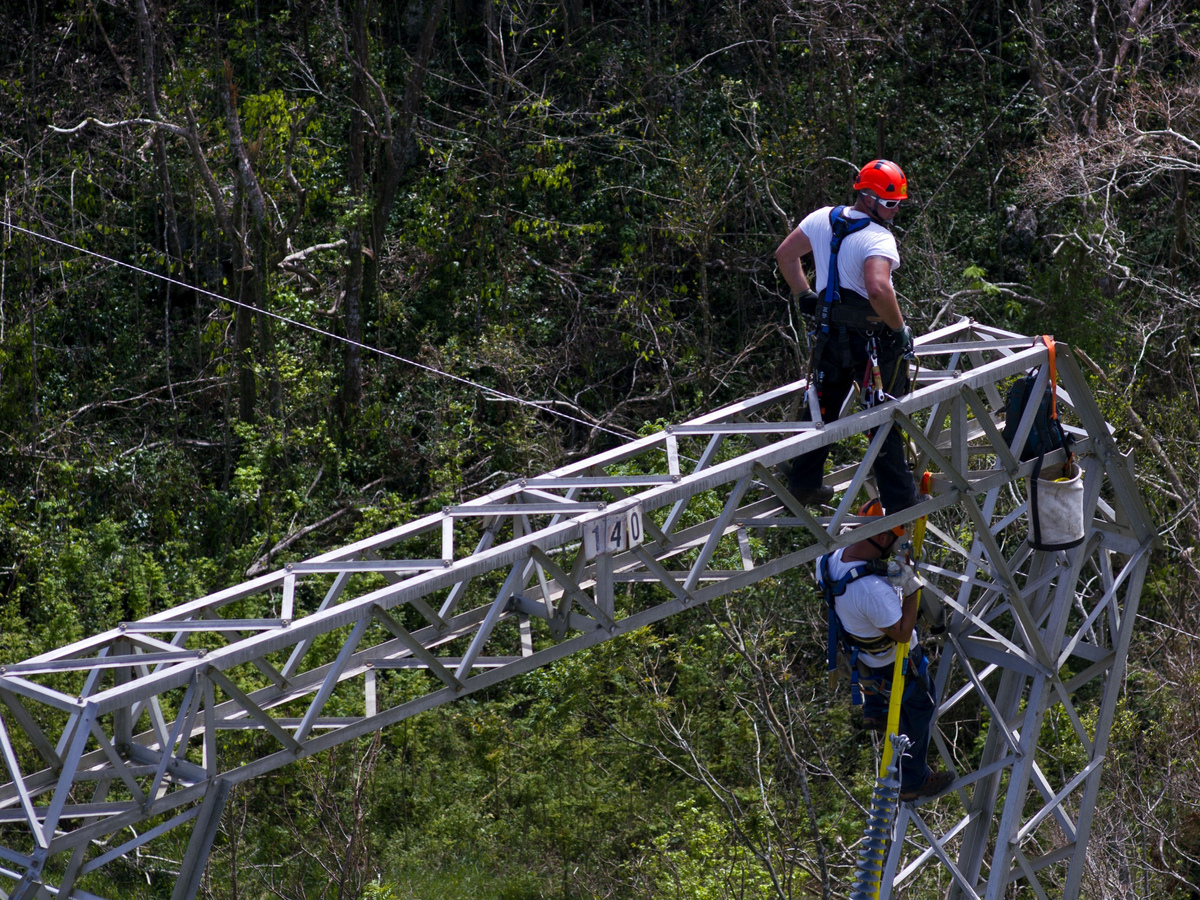 Workers restore power lines damaged by Hurricane Maria in Barceloneta, Puerto Rico, in 2017. The Trump administration says it will award nearly $13 billion in infrastructure grants to help the island recover from the storm that hit three years ago.

Puerto Rico is being promised nearly $13 billion in federal disaster funding to repair its electrical and education infrastructure three years after Hurricane Maria’s devastation and six weeks before the presidential election.

“Today’s grant announcements represent some of the largest awards in FEMA’s history for any single disaster recovery event and demonstrate the Federal Government’s continuing commitment to help rebuild the territory and support the citizens of Puerto Rico and their recovery goals,” the White House statement said.

Hurricane Maria struck Puerto Rico as a Category 4 storm in September 2017, killing at least 3,000 residents and essentially destroying an electrical system that was already unreliable. Parts of the island remained without power for almost a year.

When asked why he had announced the plans 46 days before an election, and not in the aftermath of the devastating storm three years ago, President Trump blamed Democrats and said, “We’ve been working on it for a long time.”

The White House said $9.6 billion in federal funding will help the Puerto Rico Electric Power Authority “repair and replace thousands of miles of transmission and distribution lines, electrical substations, power generation systems [and] office buildings,” and make other improvements to the grid.

An additional $2 billion grant to Puerto Rico’s Department of Education will go toward restoring school buildings and other educational facilities. Officials in Puerto Rico have sought to overhaul the public school system in Maria’s aftermath, including by allowing charter schools, despite backlash from teachers.

“Our schools and our electrical system require priority attention, particularly after the natural events that Puerto Rico has experienced during the past three years,” Puerto Rico Gov. Wanda Vázquez said, adding that the funds will go toward services essential to the public.

Vázquez also said that the funding is thanks to the work of, and good relations with, the White House and Trump.

Congress originally allocated the aid in 2018, but it has been held up as local and federal governments wrangled over how much repairs would cost and what kind of controls would be placed on spending.

In August 2019, the Department of Housing and Urban Development placed restrictions on the flow of aid to Puerto Rico. But it also announced the release of billions of dollars to certain states hit by natural disasters, drawing criticism for being stricter toward Puerto Rico than other jurisdictions.

The administration has cited concerns about alleged “mismanagement and corruption” in Puerto Rico as the reason for the holdup.

Earlier this year, HUD released its hold on more than $8 billion in aid, which was supposed to reach the island in September 2019.

Recovery efforts following hurricanes Maria and Irma have been slow in Puerto Rico, and the Trump administration has faced criticism over its response. In 2018, an internal FEMA report found that the agency failed to prepare properly for the previous year’s hurricane season and did not adequately support the affected regions.

Trump has disputed the number of hurricane-related deaths on the island and called the federal government’s response to Maria “an incredible, unsung success.”

On Friday, Democratic lawmakers raised questions about the timing of the funding announcement. Both Trump and Democratic nominee Joe Biden are courting the Latino vote in Florida, a major swing state.

During a visit to Florida this week, Biden focused outreach efforts on the Puerto Rican community and announced a plan to assist with the island’s recovery from economic challenges as well as natural disasters.

Rep. Nydia Velázquez, D-N.Y., pointed out in a statement that the Trump administration waited to allocate necessary funds until just before the election.

“While I certainly hope to see this money put to good use making Puerto Rico’s electrical system more resilient, these delays are unacceptable, and it is insulting to Puerto Ricans everywhere that the Administration is so blatantly playing politics with this aid,” she said.

Rep. Raúl Grijalva, D-Ariz., chair of the House Committee on Natural Resources, said in a statement that the delay in disaster aid for infrastructure rebuilding will have long-term economic and political consequences.

“President Trump talks about Puerto Rico like an unwanted colony full of people he thinks are dirty and not worth helping,” Grijalva said. “It will take years for Puerto Rico to repair the unnecessary harm this president and his incompetent assistants have caused the Puerto Rican people, and they won’t forget it.”