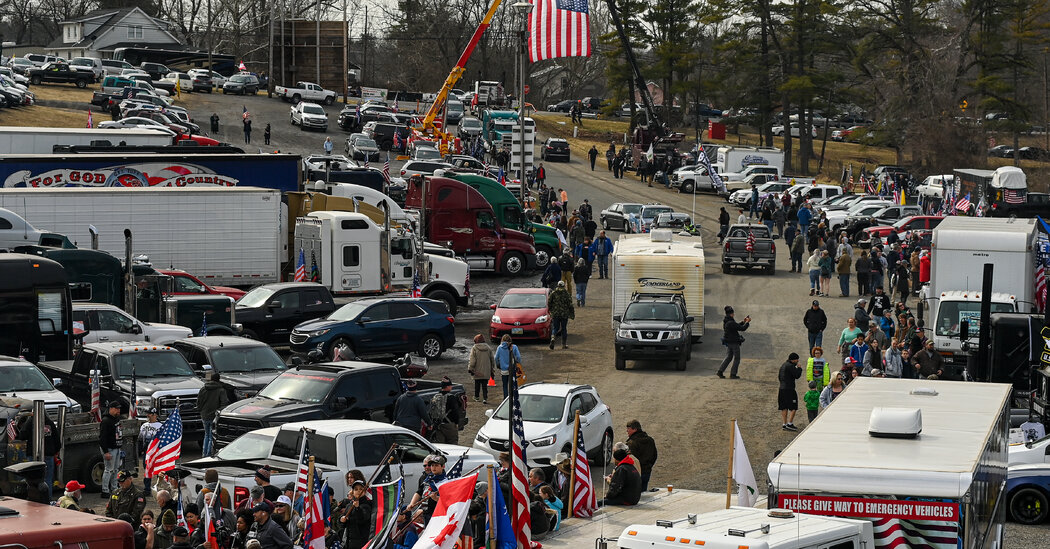 One group of truckers called the People’s Convoy that left California more than a week ago made it to the East Coast and was stationed on Saturday in Hagerstown, Md., about 70 miles northwest of the capital, converging with other drivers and their supporters — opening up the possibility that the convoy could move into Washington to hold protests against pandemic restrictions in the next few days.

It was not clear what the convoy’s exact travel plans were. A Facebook post on Saturday afternoon noted that a rally would be taking place on Saturday evening at the Hagerstown Speedway where the trucks were amassing, and several people commented that the group would be leaving on Sunday for the Capital Beltway, a highway that surrounds Washington.

There were reports on Saturday of at least a thousand trucks, recreational vehicles and cars gathered at the racetrack. One man who described himself as the lead trucker in the group told the crowd on Friday night that he would be driving his truck into the heart of the capital.

“D.C., the government, whomever, can claim that they have all this opposition for us waiting in D.C.,” the man said, according to Reuters. “But that flag on the back of my truck will go down to Constitution Avenue between the White House and the Washington Monument.”

Christopher Rodriguez, director of the District of Columbia Homeland Security and Emergency Management Agency, said the convoy had signaled that it was planning to stay outside the city. If the protesters did enter Washington, the authorities would be ready for them, he said.

“We’ve been planning for this for over a month now,” Mr. Rodriguez said, adding that National Guard members were stationed around the city with personnel, equipment and heavy vehicles.

“In the event we do see impact in the district, those personnel and equipment can help move traffic through with the support of the Metropolitan Police Department,” he said.

The People’s Convoy was one of several groups inspired by the Canadian protests against pandemic measures that disrupted the capital of Ottawa for three weeks. The American groups said they, too, would drive to Washington to lead a nonpartisan, grassroots protest of government Covid policies, but many appeared to be aligned with far-right organizations and activists.

Their demands have been undercut by the reality that many U.S. states have already started rolling back restrictions as virus cases and deaths have ebbed. And the Centers for Disease Control and Prevention issued new guidance in late February suggesting that 70 percent of Americans could stop wearing masks.

With the violence of Jan. 6, 2021, still fresh on the minds of many, officials had ramped up security around the Capitol in recent days ahead of President Biden’s State of the Union speech on Tuesday, erecting a fence around the Capitol, dispatching National Guard troops and positioning military vehicles and police cars at strategic locations on streets near Congress.

Mask guidance. The Centers for Disease Control and Prevention released updated data that suggests 90 percent of the U.S. population are in a location with low or medium Covid-19 community levels and can now stop wearing masks.

N.F.L. drops protocols. The National Football League and the players’ union agreed to suspend all Covid-19 protocols, effective immediately. The league, which is not in season, is the first of the major professional sports leagues in the United States to halt its coronavirus-related policies

Mr. Rodriguez confirmed that the fencing around the Capitol had since been taken down by federal authorities.

Another group called the Freedom Convoy that quit its journey to Washington last week after only five trucks remained claimed to have a permit to demonstrate at the Washington Monument on Tuesday afternoon before the president’s speech. City officials said only a few protesters showed up.

A National Guard spokesman confirmed this week that approximately 700 soldiers from the District of Columbia, New Jersey, Vermont and West Virginia National Guards were in the city and that their mission was scheduled to end at midnight on Monday.