Truckers Protest Mandates on D.S. Beltway for a Second Day 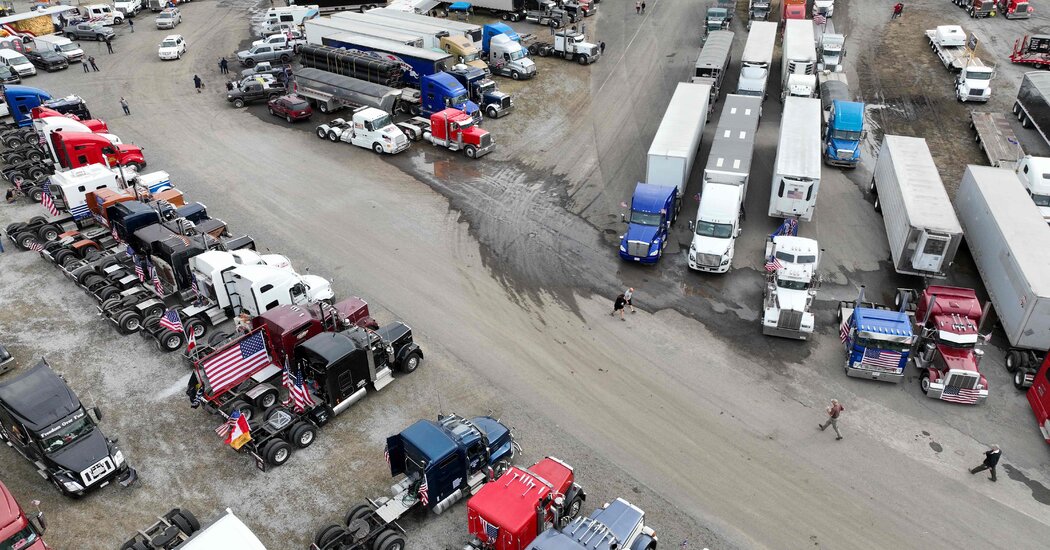 A convoy of truckers and other supporters circled the capital on the Beltway for a second day on Monday, protesting Covid-19 mandates and hoping to attract attention from lawmakers.

Brian Brase, a convoy organizer, told participants gathered at a staging area in Hagerstown, Md., that the convoy would again avoid entering Washington, D.C. He stressed that the protesters did not want to spur a violent event like the Jan. 6 attack on the Capitol, which he said would discredit the group.

And he said the group did not intend to tie up traffic.

“We don’t want to shut down the Beltway,” Mr. Brase said. “We want them to hear us roar.”

A similar demonstration on Sunday had minimal impact on traffic. The convoy — consisting of several dozen trucks, along with minivans, motorcycles, pickup trucks and hatchbacks — looped twice around Interstate 495, known as the Capital Beltway, before returning to a staging area at the Hagerstown Speedway, where the group has been based for several days. By the second lap, the vehicles in the group had spread out along the highway, and the congestion took on the feel of an ordinary weekday commute.

On Monday morning, there appeared to be far fewer passenger vehicles and RVs taking part than there were on Sunday, and the group planned to drive around the Beltway only once.

Jennifer Anderson, 48, a CBD shop owner from Corpus Christi, Texas, said she joined the convoy to protest vaccine mandates preventing her from visiting her children and grandchildren in Canada. “It’s been two years since I broke bread with my family,” Ms. Anderson said, adding that she did not know when she would see them again.

She said she refused to receive a Covid-19 vaccination because she believed it to be unsafe. (The Food and Drug Administration has fully approved vaccines from Pfizer-BioNTech and Moderna as safe and effective in adults.)

The main group behind the caravan, the People’s Convoy, has called for an end to the national emergency that was first declared by President Donald Trump in March 2020 and was recently extended by President Biden. The protesters also say they want meetings with lawmakers, congressional hearings into the pandemic’s origin and an end to government vaccine and mask mandates. Many states have already scaled back restrictions as reports of new coronavirus cases and deaths have declined in recent weeks.

The Centers for Disease Control and Prevention issued new guidance in late February suggesting that the vast majority of Americans could stop wearing masks, and many medical experts say vaccine mandates are effective in persuading more people to get their shots, which they say helps prevent the spread of the virus.

Christopher Rodriguez, director of the District of Columbia Homeland Security and Emergency Management Agency, said on Sunday that the protest did not result in major disruptions to the city’s transportation routes. He cautioned, though, that it was an “unpredictable” event. The city’s request to extend the National Guard’s presence has been approved through Wednesday, with 249 troops and 15 heavy vehicles on hand to respond to roadway disruptions.

The People’s Convoy was one of several groups inspired by the Canadian protests against pandemic restrictions that disrupted Ottawa, the capital, for weeks. Many in the American group appeared to be aligned with far-right organizations and activists. On Saturday, organizers with the People’s Convoy shared a supportive post from a prominent QAnon account on its official Telegram channel.

Mr. Brase said the group had plans to meet with two Republican senators, Senator Ted Cruz of Texas and Senator Ron Johnson of Wisconsin, on Tuesday.