Trucker Protest Moved by More Than Opposition to Covid Mandates 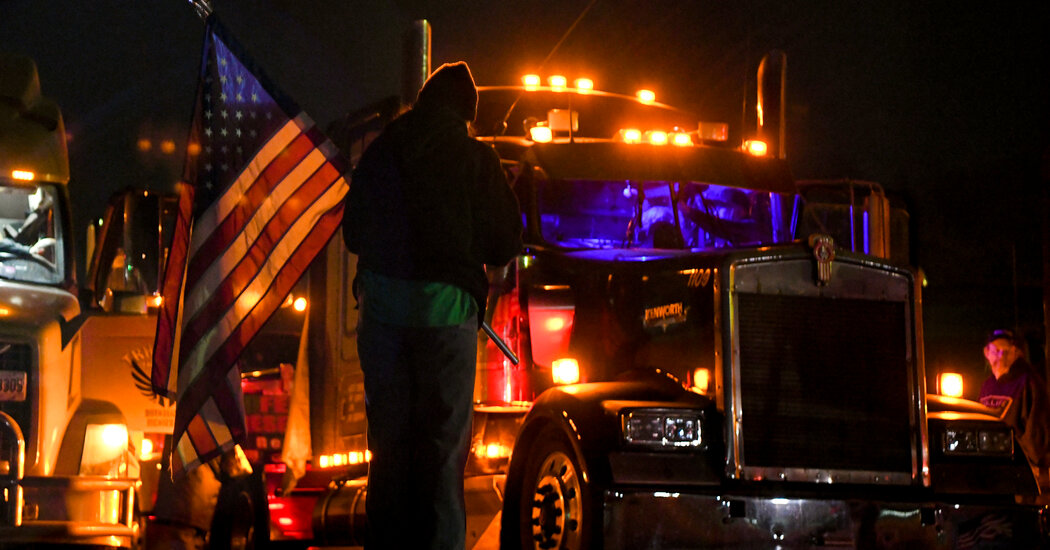 This week, one side of the stage was piled with books written by Robert F. Kennedy Jr., an anti-vaccine activist; while near the other, a vendor sold stickers saying “WHEN I DIE DON’T LET ME VOTE DEMOCRAT.” On Wednesday evening, Dr. Paul Alexander, a former official in Mr. Trump’s Health and Human Services Department who has become a prominent personality in the anti-mandate movement, called for President Biden to pardon the defendants facing charges related to the Jan. 6, 2021, storming of the Capitol.

On Friday, organizers yielded the microphone briefly to a motorcyclist in leather chaps, who exhorted the mostly white crowd to strip the “Black Lives Matter” slogan from a street near the White House where it has been painted in giant letters. “We’re going to take it back,” he declared.

Banners with symbols of the Three Percenters, an armed extremist movement, have been flown from some trucks in the convoy. Two young men in the attire of the Proud Boys, the far-right organization, were milling around the camp on a recent morning.

Asked in interviews what had drawn them to the protest, demonstrators spoke of ending a national emergency order Mr. Biden had extended in February, as well as a handful of remaining federal restrictions — vaccine requirements for military service members, for instance, and mask requirements on airplanes.

But most of the dozen demonstrators interviewed also enumerated other motivations, from concern over gun rights and abortion to the Trump-aligned QAnon conspiracy theory. Not all of them identified as Republicans, but all who disclosed how they voted in 2020 had supported Mr. Trump, and said they believed or at least suspected that the election had been rigged against him.

“We’ll be satisfied when Biden’s gone, when Harris is gone and Pelosi’s gone,” Curt Martin, a 73-year-old truck driver from upstate New York, said. “When they’re gone, we’ll be happy. We’ll go home. But not until then.”

Besides an end to the emergency order, the convoy is calling for an investigation into Covid-19’s origins and the federal response, and is encouraging state-level protests against local restrictions.